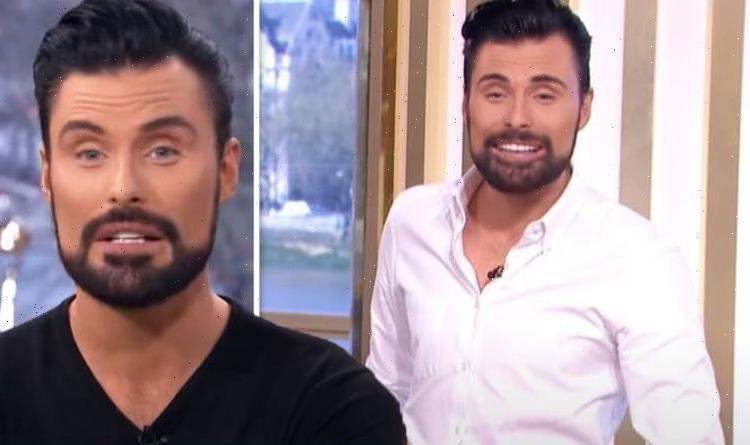 Rylan Clark-Neal and Dan Neal host This Morning in 2018

This Morning presenter Rylan Clark-Neal, 32, has been spotted with his wedding ring firmly in place, months after it was announced he had split from husband Dan Neal after six years of marriage. Attending the wedding of his brother over the weekend, the Essex native was seen for the first time following his recent absence from the spotlight.

Donning a navy suit complete with a white corsage pinned to his lapel, Rylan fashioned his hair into his usual side-parting while sipping a drink with his ring-clad hand.

The star looked healthy and happy after taking time away from the spotlight since he revealed that he and Dan were going their separate ways.

Rylan returned to work this week following a three month break after announcing his and Dan’s split.

The Strictly spin-off host is returning to the spotlight with his own podcast series The Ry-Union, which sees him team up with Katie Price to chat to their celebrity friends.

Last month saw The X Factor star pull out of various work commitments following the announcement of his separation from husband Dan.

Rylan pulled out of attending the Fantasia concert alongside Joey Essex and Denise Van Outen, confirming that he was taking “time away from work” following splitting from his spouse of six years.

He also pulled out of presenting Eurovision later in May as well and his noticeable absence from the spotlight caused concern with his fans.

However, The Strictly: It Takes Two host addressed his break from his career in a statement on social media.

Rylan wrote: “I just wanted to write a message to thank you all for the love and kindness you’ve shown us.

“We are currently prioritising our mental health and looking after the ones around us we love most.”

He added: “I am working towards getting back to the jobs I love in due course.

“Thank you for being patient with me,” Rylan ended the post.

The statement followed one that Rylan previously made, confirming his split from his husband.

He penned: “Following reports about Dan and I spending time apart, I feel I have to speak out – as the way it is being reported is unfair.

“I have made a number of mistakes which I deeply regret and have inevitably led to the breakdown of our marriage.”

He continued: “I have taken time away from work as I am not in a good place at the moment and am seeking help.

Rylan ended the post: “I am trying to take each day at a time and would like to say thank you to everyone for their support and for respecting our privacy at this time.”

As host of spin-off show Big Brother’s Bit On The Side, Rylan interviewed Dan, who had been a contestant on the main series of the show.

They went on to marry in a Big Brother themed wedding in 2015.