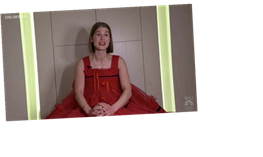 Rosamund Pike has assumed guardianship of the Best Actress Golden Globe for Motion Picture, Comedy or Drama, for the ruthlessly hilarious I Care A Lot.

It was tough field that included newcomer Maria Bakalova who was a breakout hit in Borat Subsequent Moviefilm. In her acceptance speech, Pike gave a shoutout to fellow nominees, especially Bakalova. “In my film I had to swim up from a sinking car. I think I would have rather had to do that  than be in a room alone with Rudy Guiliani.” (We have Bakalova’s Tutar from Borat Subsequent Moviefilm to thank for forcing Rudy Giuliani to publicly defend some awkward hand motions as tucking in his shirt.)

Pike plays Marla, a con artist with a lucrative gig tricking not very bright judges into naming her legal guardian for the elderly and stealing all their stuff. Her scheme backfires, however, with surprising results when she tries it on a seemingly kindly old lady with powerful connections, Jennifer Peterson (Dianne Wiest).

Deadline’s Pete Hammond has pointed out the eerie timeliness of the Netflix film from writer/director J. Blakeson that premiered Feb. 9 given the almost yearlong focus on the condition of nursing and retirement homes during the pandemic. More recently Britney Spears and her conservatorship were back in the news.

Pike who most recently starred as pioneering scientist Marie Curie in Marjane Satrapi’s Radioactive, has Globe nominations for David Fincher’s Gone Girl and Matthew Heineman’s A Private War. She showcased her comedic work in Nick Hornby’s short-form series, State of the Union.