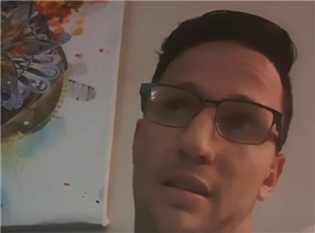 Recently, Tiffany Franco unloaded on estranged husband Ronald Smith after he moved on with a new girlfriend.

Now, Ronald is claiming to have his own receipts, accusing Tiffany of lying about absolutely everything.

He also claims that Tiffany is a master manipulator who “makes” him get “very upset” on purpose.

It is sadly no surprise that this has continued to play out after their latest and final split.

Tiffany has had a lot to say recently about Ronald.

In turn, Ronald has had so, so much to say about his estranged wife.

He recently took to Instagram Live to say a lot.

While many of the comments that he received were (at times hilariously) unflattering towards him,

“First of all, the story of her saying that I said ‘we must fix things’ and so on, that’s a lie,” Ronald said.

He also shot down the claim that Lauren, his rebound girlfriend, is a pawn.

“Tiffany, just accept it’s over,” Ronald said. “Accept it and move on.”

“But you want to make it so ugly,” Ronald complained.

“Saying that I jerked off to you yesterday,” he noted, referring to Tiffany’s claim that they’d recently had a naked video chat.

“Tiffany has a very good talent of making up stories,” Ronald accused.

He also alleged that “she will say the right things that she knows will make up upset, make Lauren upset, or anything like that.”

Ronald says that “she doesn’t tell you guys the full story.”

Some commenters were clearly Team Ronald and perhaps had been for a long time, despite his on-screen behavior.

Replies encouraged Ronald to stay strong and not “fall for” Tiffany’s behavior.

Others suggested that Ronald was better off having moved on … with some unsubtle hints for him to stop airing this drama.

Meanwhile, a lot of replies were not believing Ronald, no matter what they thought of Tiffany.

Several noted that Ronald’s lack of impulse control, poor judgment, and need to “explain” everything like this reminded them of addict behavior.

In addition to Ronald’s known issue (like gambling), Tiffany recently accused him of drug use, presenting evidence to her followers.

A lot of commenters were seemingly taking aim at both Ronald and Tiffany.

When there are kids involved, people really wish that exes would use restraint and not air everything.

They’re reality stars and of course we’re all here for the drama, but how much do either of them want getting back to Daniel? How about to Carley one day?

Tiffany has asked fans for advice on divorcing Ronald.

Many did not take her seriously, because she has claimed to be breaking up with Ronald many times in the past.

However, this time, the split appears to be sticking … but Ronald says that her divorce plans are a mystery to him.

According to Ronald, his marriage to Tiffany was recognized in South Africa but not yet officially recognized in the United States.

Now, this is coming from him and not confirmed by her, so we’ll take it with a grain of salt.

But it’s possible that this is one of the undefined paperwork delays that Ronald was angrily complaining about earlier this year.

Ronald and Tiffany clearly had a lot of love for each other.

It was enough that Tiffany was willing to live with him in South Africa until she realized that it wasn’t the place to raise her kids, at which point Ronald would have moved to America.

But love isn’t enough. This couple lacked a lot of maturity — and while Ronald was the main culprit on the show, Tiffany needs to reel it in on social media as much as he does.