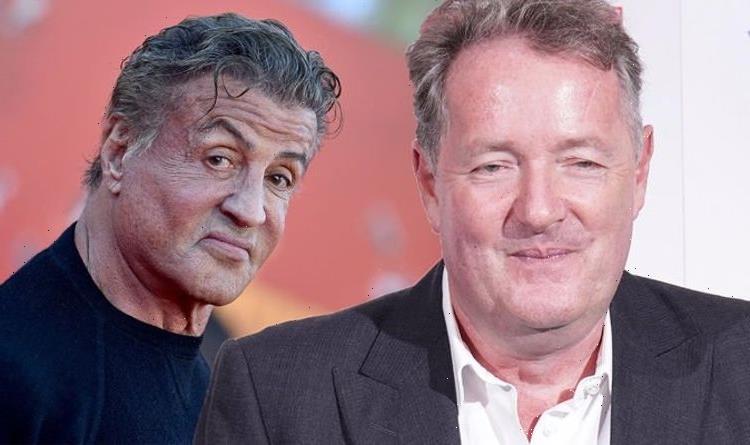 Journalist Piers Morgan, 56, has claimed that Rocky star Sylvester Stallone once took a jibe at him, after the latter effortlessly defeated him in an arm wrestling match. The Hollywood actor, 75, pulled no punches when the ex Good Morning Britain host bragged about his “guns”.

Piers reflected on the moment in his latest tell-all article about the various celebrity encounters he has experienced over the years.

Under the heading “Dumbest act of bravado”, Piers described how the arm wrestling competition came about.

He wrote: “‘I reckon I could take you at arm-wrestling,’ I told Sylvester Stallone in a Vegas casino, forgetting that he once literally starred in a movie about arm-wrestling, called Over The Top.

“Stallone’s warrior eyes swivelled into mine, blood red with fury at this imbecilic boast. ‘Oh YEAH?’

“We leaned across the table and grabbed each other’s hands, as a large group of spectators began whooping and hollering,” Piers continued.

“‘You’re going down, Stallone,’ I goaded, absurdly, theatrically kissing my arm muscles. ‘I’ve been working on these guns for ages.’ It was over in 0.3 seconds.

“I went to push the Rocky and Rambo star’s stupendously well-developed right paw down and felt this sudden torrent of power smashing into mine, sending it crashing into the table so hard that Vegas TV later ran reports of a suspected earthquake in the Planet Hollywood area.

The presenter named Sylvester amid a number of high-profile celebrities in his Daily Mail article, which features the likes of Barbra Streisand, Dustin Hoffman and Beyoncé.

Piers decided to compile a list of his “All-Time Morgan Awards” as he prepared to leave the paper, mocking and praising various famous stars on his way out the door.

The journalist began his weekly diary in 2006 and will now be turning his attention to TalkTV.

This story is not the first time Piers has been seen making a joking reference to his “guns”.

In October, Piers’ wife Celia Walden posted a picture of her husband attempting to flex his biceps in front of a building with a sign that read “muscle beach”.

Under the picture, which was taken while the couple were enjoying the sun in Venice Beach, California, Celia wrote: “Not clear whether he’s flexing his muscle… Or looking for it.”

Celia started going out with former newspaper editor Piers in 2006.

They wed in 2010 in Swinbrook, Oxfordshire, around the time Piers was a judge on ITV’s Britain’s Got Talent.

Aside from his mention of Sylvester, Piers also talked about his family in his star-studded article.

Under a section that he titled “first and last TV interview with my children”, he poked fun at his three sons.

Apparently, when they were asked on the red carpet what it was like having Piers as a father, one suggested it had its ups and downs, before another clarified “mainly downs”.

Piers and Celia share one additional child together, a daughter named Elise, who was born in 2011.