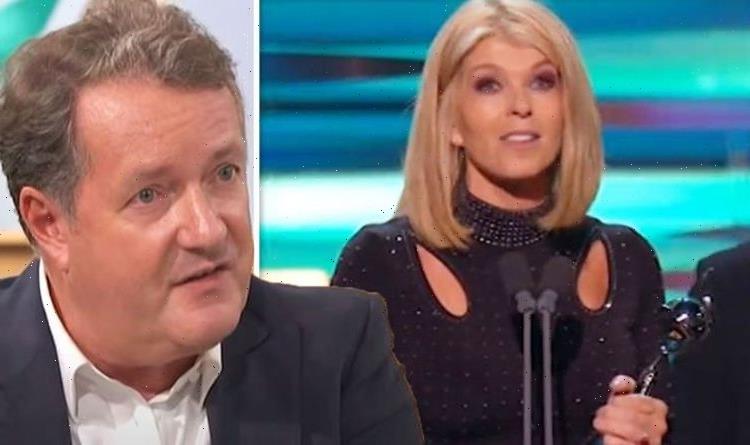 Former Good Morning Britain presenter Piers Morgan, 56, has taken to Twitter to praise his colleague and friend Kate Garraway, after she won an NTA for her documentary following her husband Derek Draper’s battle with coronavirus. The Life Stories host said that “people have no idea” of what she’s going through, after her family’s lives were turned upside down when her former lobbyist husband contracted Covid last year.

In view of his 7.9 million followers, the ITV host had nothing but praise for his colleague.

Piers wrote: “Love her. @kategarraway. One of the bravest most inspiring people I’ve ever known.

“People have no idea of the true hell she’s going through because she’s always putting others first & never complains.”

“Just pray her Derek comes out the other side,” he ended the tweet.

Last night saw the newsreader land an NTA in the Authored Documentary category for her documentary about Derek’s battle with long Covid.

The programme follows Kate, her two children Darcey and Billy, and her husband, who spent over a year in hospital after contracting coronavirus.

Accepting the award, an emotional Kate said: “It was a hugely brave decision of ITV to commission this, they didn’t really know what they were making.

“A story about bereavement and triumph. In the end, really, it ended up being something between the two.

“Thank you so much for voting, I wonder if the reason why you did is because our story is your story. I think we’ve all been touched by the pandemic, whether it’s livelihood or mental health.

“I just want to say to all the Darcey’s and Billy’s and Derek’s and Derek’s families, whatever you’re going through, you’re not forgotten. We want the joy back, we want it to be over but the fight goes on.

“But most of all Derek, you should be here and should have had the chance to tell your own story.

“Derek, you’re going to get the chance, believe! The hope is real! Thank you so much,” she ended her speech.

Following her win, Kate took to Instagram to reveal that she had been in an “emotional daze” after scooping the NTA.

Posting a snap of herself FaceTiming Derek, the TV host penned a heartfelt caption.

Shr wrote: “Wow. Thank you so so much. Have been in such an emotional daze all night I failed to get a single photo of me or the brilliant @flickerproductions team who made #findingderek @theofficalntas !!

“But maybe this is the photo you most wanted to see anyway – Me FaceTiming Derek (via Darcey’s phone!) to tell him we had won! From him and from the bottom of our family’s hearts THANKYOU.

Piers himself was nominated for the best TV presenter award alongside ITV colleagues Holly Willoughby and Ant McPartlin and Declan Donnelly, Bradley Walsh, and Alison Hammond.

However, after losing to I’m A Celebrity… Get Me Out Of Here! favorites Ant and Dec, the former newspaper editor took to Twitter to aim a thinly-veiled dig at the duo.

“Wow! What a shock! Congrats to Ant & Dec. Thoroughly deserved 20th consecutive win – the way they held those jungle contestants to account during the pandemic was absolutely brilliant,” he wrote.