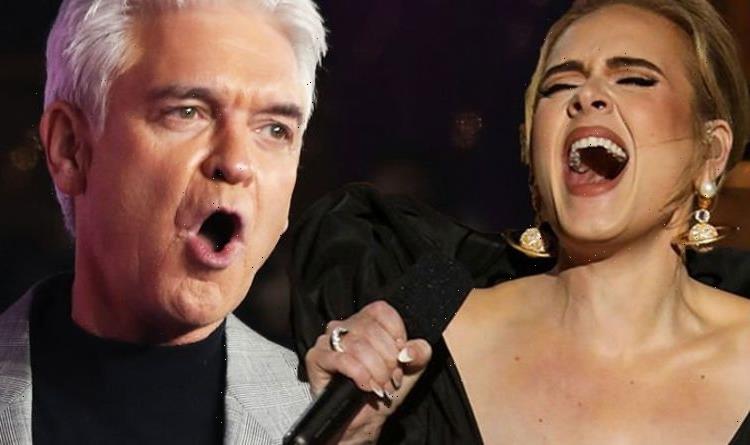 Phillip Schofield reveals why he wouldn't do I'm a Celeb

This Morning presenter Philip Schofield has taken a cheeky swipe at Karma Chameleon hitmaker Boy George, after having his view blocked by his signature hat “again”. The star, 59, previously had his view obscured by the singer’s huge headgear as he attended An Audience With Adele at the London Palladium – which aired on Sunday night – and was pictured struggling to watch the superstar perform as the singer sat in front of him.

Taking to social media at the weekend, the TV presenter previously responded to a meme made by a fan.

But it seems that the ITV star faced the same issue again at the ITV Palooza last night.

Posting a snap of himself standing behind Boy George to his 4.4 million followers, Philip looked bemused as he attempted to peer around the side of the musician’s oversized hat.

The This Morning star captioned the post: “Not again!” alongside two laughing face emojis.

On Sunday night Mia McHugh tweeted a picture of Phillip peering around behind Boy George, trying to get a look at the stage and captioned it: “When you can’t see from behind Boy George’s hat @Schofe.”

Fans felt sorry for him and showed their sympathy online.

Some social media users branded the giant blue hat “inconsiderate”, but he thankfully saw the funny side.

Addressing the situation in a later tweet, Philip told how the awkward moment allowed him to “bond” with a Schitt’s Creek actress.

In an update, he wrote: “It was actually fine lol!

“I only had to look round it twice, it meant I bonded with Catherine O’Hara because we both laughed and started talking as @BoyGeorge sat down AND it was a great hat.

“(Then Brian Cranston got us drinks!) altogether an AMAZING night,” he added.

Responding to Phillip’s latest tweet, Daniel Moon wrote: “Love this. What a pair of legends.”

While social media user Mark suggested that the ITV favourite could take fashion advice from the singer: “Think you need a hat next Phil. George looks great on his.”(sic)

A myriad of celebrities attended the star-studded event, as Adele took questions from them in the pre-recorded special.

Comedian Dawn French was in attendance as was award-winning actress Emma Thompson, who quizzed Adele about who had inspired her.

Supermodel Naomi Campbell and actors Samuel L. Jackson and Jodie Comer were also in the crowd.

At the start of the evening, Adele admitted that she was “very, very nervous” to perform at the iconic venue.

She said to the crowd: “I got really emotional when I came round the bend up there. I am very, very nervous. Of course I am.”

An Audience With Adele can be streamed on the ITV Hub.