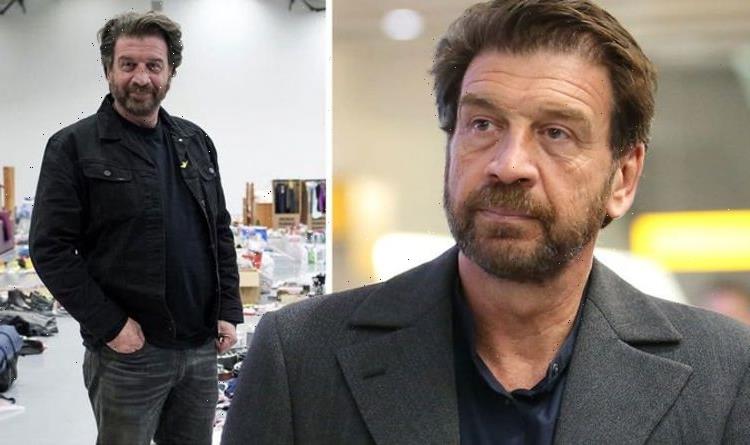 Nick Knowles in tears as he discovers Children in Need total

Nick Knowles got rid of the vast majority of his processions when he moved from London to a small cottage in the countryside four years ago. And now the 58-year-old TV star, who is best known for presenting BBC One’s DIY: SOS, has spoken about the life-changing move.

Nick said it was “strangely empowering” to have a clearout, however he did admit to getting a bit carried away.

He made his comments ahead of the release of his new Channel 5 show, Nick Knowles’ Big House Clearout.

After going through the process himself, Nick has helped six families take on the same journey.

If they are able to ditch at least half of the clutter in their home, they are given an incredible property makeover from the presenter and his team.

“While it feels uncomfortable to start with, once you get on a roll with it, weirdly it becomes strangely empowering,” Nick commented.

“When I did it, I got a bit carried away with it.

“I handed furniture to friends who have similar houses to the house I was living in in London, gave various pieces to charity shops and then literally had two skips full of stuff that I was like, ‘Well, I’m never going to use that, and I don’t think that’s going to be any use for anybody else’.

“My lifestyle has improved dramatically because I haven’t got a load of clutter,” he went on to add.

The father-of-four, who got rid of “hundreds and hundreds” of books, said he wanted to make space for activities that he could do with his children.

“Like planting a vegetable garden that my little six-year-old boy and I can grow sweetcorn and peas in,” he explained.

Getting rid of personal processions can be an emotional process, as one mother of two teenagers discovered while taking part in the show.

The TV personality revealed that Vicky from Marlow in Buckinghamshire had attached memories to items that had collected over the years and found it very difficult to part with them.

Earlier this week it was revealed that Nick will be stepping back from presenting DIY: DIS.

He will not front the upcoming Children in Need special which begins filming later this month.

It is the first time Nick has not been a part of the show since it launched back in 1999.

It follows a dispute over an advertising campaign for Shreddies.

The ad in question saw Nick eat the cereal while wearing a hard hat and builder’s clothing.

It was said to have gone against BBC advertising guidelines, which state: “Actors and artists who perform in BBC output should not appear in promotional work, including advertisements, in a way which mimics or replicates their on-air roles for the BBC.”

Nick will return to the show for the 2022 series.

Comedian Rhod Gilbert will front the on-off charity special which airs in November.