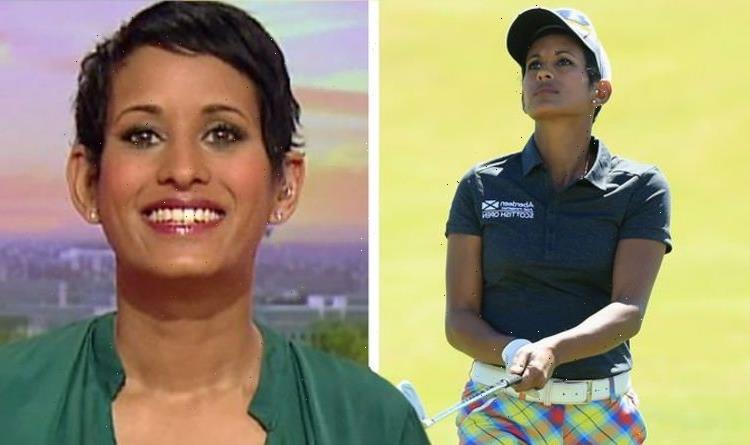 BBC Breakfast viewers were left wondering where regular presenter Naga Munchetty, 47, has been recently as her absence from the show remained a mystery. But it’s a mystery no longer, as it turns out the host is on a well-deserved holiday, enjoying a golfing break in Scotland.

After fans took to social media to try and work out where she was, they came across a few retweets from Naga herself, showing her golfing up north.

The Scottish golf course where she is currently staying, tweeted: “Great to see Naga Munchetty from the BBC playing on the Links today at Fortrose & Rosemarkie Golf Club.

“Great player with a 7 handicap too.”

They added: “We hope you have a great time in the Highlands of Scotland.”

Naga herself soon posted a sweet message about her time away, saying: “My happy place. Have had a fabulous few days (never enough) Great golf, weather and laughing with friends. I will be back!”

It comes after the presenter found herself replying to a couple of disgruntled Breakfast viewers over the weekend, after they celebrated the fact she wasn’t on-air.

The TV star wasn’t in the mood for unnecessary remarks and let her stance on their unpleasantness known to all.

One user names Rob, announced how glad he was Naga was missing from the BBC show, penning on Twitter: “Glad that BBC Breakfast doesn’t have @TVNaga01 on the sofa again.

“It’s a far more pleasant program without her snide and irritating comments. “Long may the lack of @TVNaga01 on our screens continue.”

In the comments section, Naga’s fans began to defend the presenter but it soon came to her attention, and she sure didn’t beat around the bush with her reply.

“Thank goodness there’s someone else who is also ‘snide & irritating’ out there. Phew!”

She concluded by reiterating the user’s last sentence with a clever play on words: “Long may your own lack of pleasantness continue.”

Another user also decided to pen their dissatisfaction, agreeing with Rob’s comments.

Taking to Twitter, the user known as Tim, wrote: “I and many others change channels when snide Naga is on. Agree with Rob.

“Whats worse if you turn the radio on, she’s there as well,” he continued, referring to her Radio 5 Live programme.

“Why on earth do BBC rate her? Well I know the answer….”

BBC Breakfast airs weekdays at 6am on BBC One.