If Masked Singer was your first introduction to Robin Thicke, hello and welcome! Clearly you did not spend 2013 listening to “Blurred Lines” and watching the music video on repeat (while experiencing mixed feelings about both, of course) and then bleaching your eyeballs after his controversial performance with Miley Cyrus at the MTV VMAs! (Yeah, the one with the twerking foam-finger.)

Even before all of that nonsense, Robin was very much a fixture in Hollywood. Both his parents had successful careers of their own in the entertainment industry—his mother is actress-singer Gloria Loring from NBC’s popular soap Days of Our Lives, and his father was Alan Thicke, famous for his role in the ’80s sitcom Growing Pains. When Alan passed away in 2016, he reportedly left a net worth of $40 million, which, split between Robin, his two brothers, and Alan’s widow, is quite a nice inheritance, to put it mildly. Long story short, Robin Thicke is known as a Hollywood-rich-kid-turned-R&B-and-soul-singer-and-songwriter. Here’s a deep-dive into his fortune, including the money he’s earned from his time as a judge on Masked Singer.

He’s Been Making Music-Industry Money Since He Was 16

When he was just a teenager, Thicke and his music group As One recorded a professional demo tape that R&B artist Brian McKnight eventually got his hands on. McKnight was so impressed, he signed Robin to his production company, and introduced him to Jimmy Iovine of Interscope Records. Robin went on to sign a recording contract when he was just 16 years old!

By the age of 17, Robin moved out of his parents’ house and was making enough money as a professional producer and songwriter to support himself. His contributions to the music industry have been significant, with three solo albums, multiple singles that topped the charts in the States and internationally, and collabs with big names including Lil Wayne, Usher, Snoop Dogg, and Mary J Blige. He’s also toured with legendary stars like Beyoncé and Jennifer Hudson. 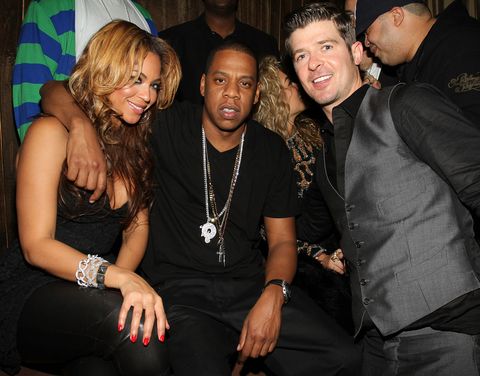 His career really took off with the 2013 release of “Blurred Lines,” the catchy-but-highly-questionable song he made with Pharrell Williams and T.I., which reportedly earned Robin over $5 million. Knowing just how much money he made from the song is actually a pretty big deal. According to The Hollywood Reporter, “Few things are more closely guarded in the song business than financial profitability, and these types of details usually only leak out in accounting disputes that make it to trial.”

Plus He’s Been Able to Monetize His Time

Robin Thicke has sang on Oprah (twice!), performed at countless televised award shows, and appeared on musical competitions like The Voice, Duets, and America’s Got Talent. Sure, we don’t know exactly how much he was compensated for any of these television appearances, but I’m guessing he wouldn’t agree to any shabby deals!

And Then There’s the Masked Singer

Robin Thicke has been a judge (along with Ken Jeong, Jenny McCarthy, and Nicole Scherzinger) on The Masked Singer since the show hit FOX in 2019. And apparently, according to executive producer Craig Plestis, Robin understood that the show would be a smash success from day one. Here’s what Plestis told Deadline:

We don’t know exactly how much Robin’s initial contract with FOX was for, nor we do know how much he’s earned in subsequent seasons—especially when you take into consideration that the show consistently scores super high ratings. All that aside, it doesn’t take a mathematician to understand that more viewers = juicier advertising deals = bigger paychecks. In conclusion, judging Masked Singer is probably a verrrrrry lucrative opportunity.

Sweet, So What Is Robin Thicke’s Net Worth?

I thought you’d never ask! According to Celebrity Net Worth, Robin Thicke’s total net worth clocks in at $10 million. The website, um, Wealthy Genius, however, claims Robin Thicke is worth closer to $20 million. In any case, he’s worth at least eight digits, so I’ll be right over here doing this: