Lucy Hale and Riverdale actor Skeet Ulrich have yet to confirm their relationship, but they’re dangerously close to being Instagram ~official~. The odd pair is causing fans to raise their eyebrows mainly because of their rather large age difference. Skeet is 51 years old and Lucy is 31 years old. I’ll do the math for you—that’s a 20 year age difference.

Lucy recently posted a cute photo to her Instagram account and guess who left a flirty comment. Skeet! She captioned the photo, “i miss new york,” since she’s standing in front of a window showing NYC. Skeet commented, “My goodness!!” 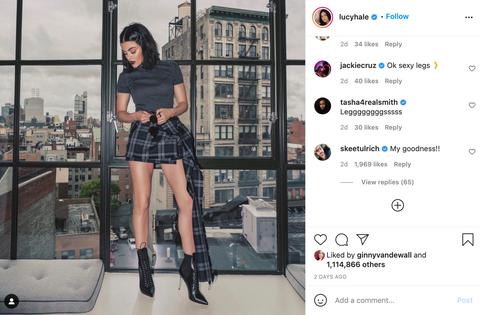 Obvs, this caused fans to speculate that they’re an item. One user wrote, “get married already,” which feels a little abrupt but what do I know? Another commented, “ok I’m actually kinda obsessed with them.” One wrote, “this is sooooo amazing, im so happy for you two ❤️❤️❤️.”

Lucy and Skeet first sparked relationship rumors after they were photographed showing PDA in Los Angeles, in pics obtained by Page Six. They were on what looked like a lunch date at Sweet Butter Cafe and were photographed kissing. If you’re wondering how they even met, there’s a theory floating around that they met through their connection to The CW. As we know, Skeet is a star on Riverdale and Lucy stared on Katy Keene before its cancellation. Both shows are in the Riverdale universe, so it makes sense that they would know each other.

Honestly, even though the age gap is big, if it works for them then cool! Stranger things have happened… especially in Hollywood.

You love all the deets on the celebs. So do we! Let’s overanalyze them together.