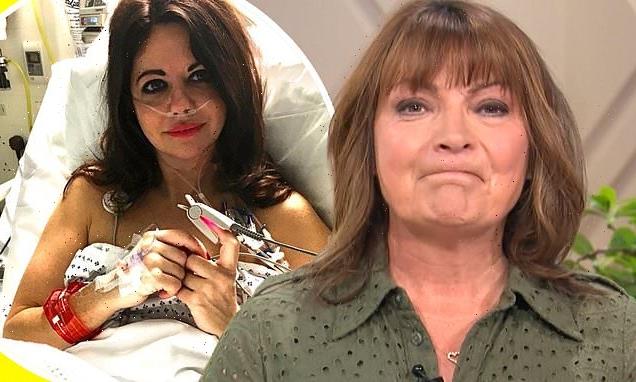 ‘We’ll never know how many lives she saved’: Lorraine Kelly gets teary-eyed as she hails friend Deborah James for raising over £1 million in 24 hours

Lorraine Kelly fought back tears as she lauded ‘inspirational’ Deborah James during Tuesday’s Lorraine for raising over £1 million on her GoFundMe.

The broadcaster, 62, said the podcaster, 40, who has been living with stage four bowel cancer for five years, is ‘amazing’ for raising the money in the wake of her announcement she’s been moved to hospice care.

On Monday, Deborah shared a ‘goodbye’ message with her followers after revealing she had stopped receiving ‘active treatment,’ and as she moves to hospice care ‘no one knows how long she has got left.’ 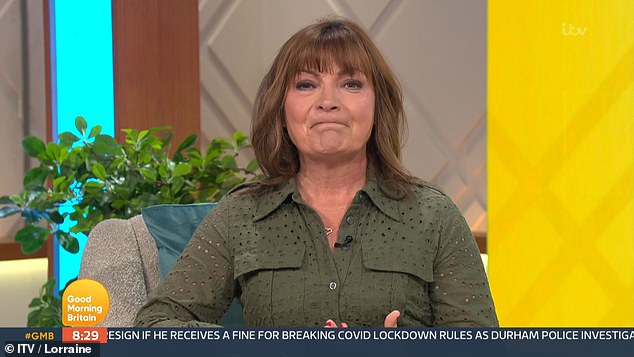 Touching: Lorraine Kelly fought back tears as she lauded ‘inspirational’ Deborah James during Tuesday’s Lorraine for raising over £1 million on her GoFundMe

Lorraine admitted she thought that Deborah would ‘bounce back’ despite her cancer diagnosis, after visiting her in hospital.

‘She’s amazing, isn’t she? Absolutely astonishing,’ she said, before referring to Deborah’s campaign to raise money for Cancer Research UK.

‘She’ll be absolutely thrilled and overjoyed with that! I thought, as I always do, that she would bounce back… but she’s getting very well looked after by everybody that loves her. So we’ll be talking about that today.’ 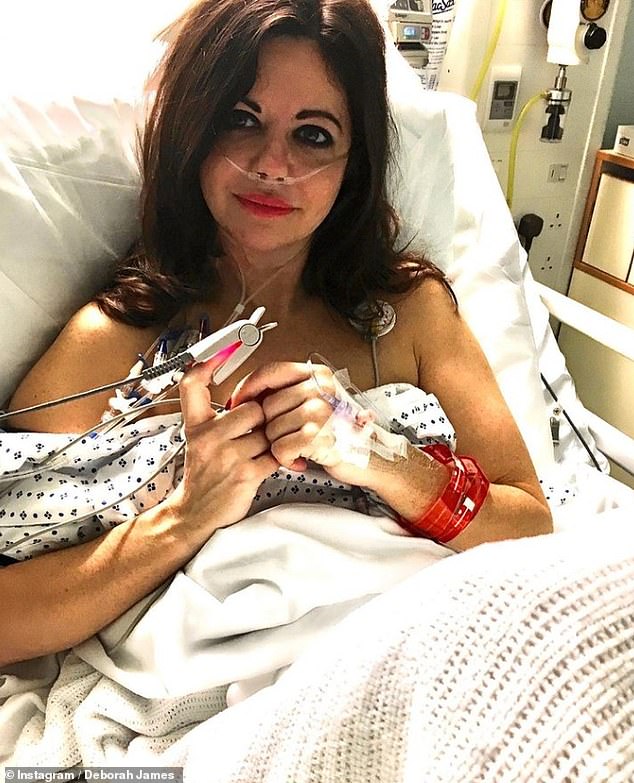 Sad news: The BBC podcaster, who was diagnosed with incurable bowel cancer in 2016, revealed on Monday she’s ‘stopped active treatment’ and has been moved to hospice care

Lorraine later told viewers: ‘I know she is watching now, and she wants to say ‘thank you’. She is about to get to £1million, so thank you.”

‘What she’s doing is asking everyone to buy her a drink. Well you don’t actually do that, but what you do is donate to her Bowel Babe fund.

“I’ve been looking at this all morning, and it’s really cheered me up. It’s astonishing it really is. I think she’ll definitely get to a million, fingers crossed.

‘We’ll never know how many lives she saved.’

After posting on Instagram about moving into a hospice, tributes have poured in for mother-of-two Deborah, celebrating her work raising awareness of bowel cancer, and helping ‘break the stigma’.

Her podcast co-host, Lauren Mahon, from You, Me and the Big C on Radio 5 Live, shared a lengthy tribute on Instagram, saying that hearts have been ‘shattered into thousands of pieces’ by Deborah’s announcement and are simultaneously ‘completely bursting with pride’.

And her GoFundMe page for the newly-announced Bowelbabe Fund for Cancer Research UK has raised more than £600,000 in less than 24 hours since it was set up.

Incredible amount: The broadcaster, 62, said the podcaster, 40, who has been living with stage four bowel cancer for five years, is ‘amazing’ for raising the money in the wake of her announcement she’s been moved to hospice care

At the start of the year, Deborah, who shares her children Hugo, 14, and Eloise, 12, with her husband Sebastien, announced she had ‘nearly died’ in hospital, calling it the ‘hardest’ part of her 5-year cancer battle, and was admitted as an in-patient earlier this month.

She shared an Instagram post earlier this evening saying ‘nobody knows how long she has left’, writing: ‘The message I never wanted to write. We have tried everything, but my body simply isn’t playing ball.

‘My active care has stopped and I am now moved to hospice at home care, with my incredible family all around me and the focus is on making sure I’m not in pain and spending time with them.’

She continued: ‘Nobody knows how long I’ve got left but I’m not able to walk, I’m sleeping most of the days, and most things I took for granted are pipe dreams. I know we have left no stone unturned. 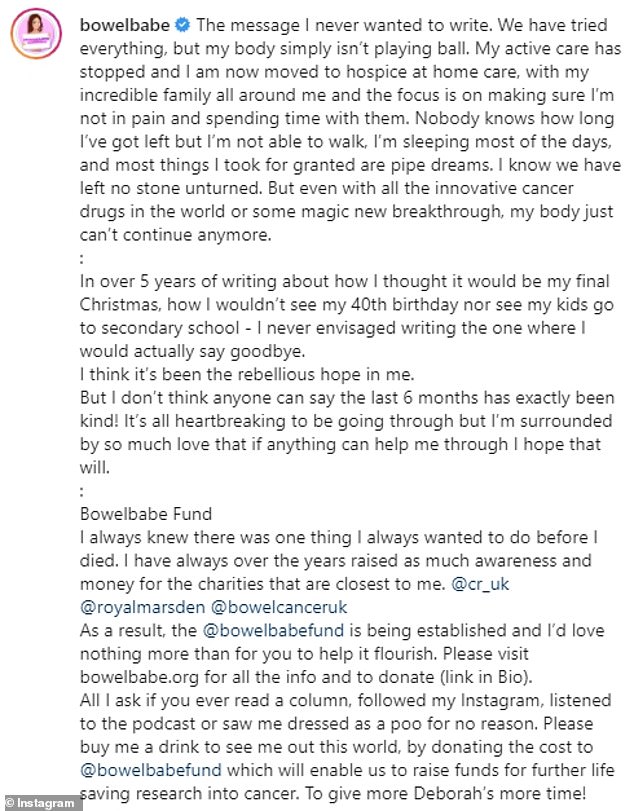 In an emotional post shared to Instagram, Deborah said her body ‘was not playing ball’ and she was spending ‘most of the day sleeping’

Tragic news: In an emotional Instagram post on Monday, Deborah shared her ‘active treatment has stopped’ and she’s been moved to hospice care

‘But even with all the innovative cancer drugs in the world or some magic new breakthrough, my body just can’t continue anymore.’

‘In over 5 years of writing about how I thought it would be my final Christmas, how I wouldn’t see my 40th birthday nor see my kids go to secondary school – I never envisaged writing the one where I would actually say goodbye. I think it’s been the rebellious hope in me.’

Tributes to Deborah called her a ‘true inspiration’ and a ‘force to be reckoned with’ when it came to talking about bowel cancer.

Lauren shared a lengthy tribute on Instagram, saying that hearts have been ‘shattered into thousands of pieces’ by Deborah’s announcement and are simultaneously ‘completely bursting with pride’. 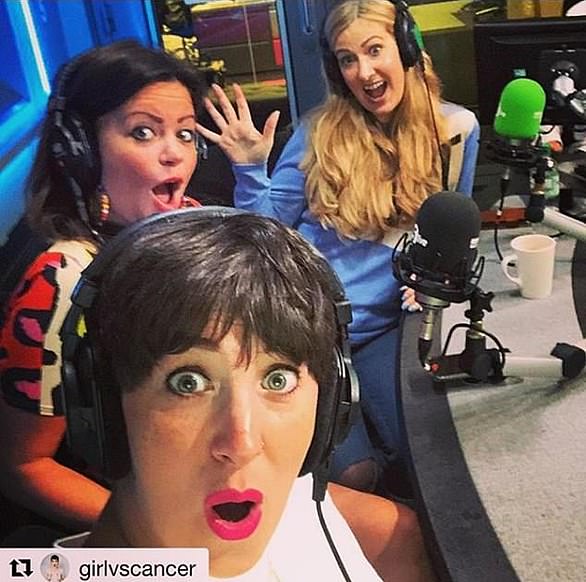 In 2018, Deborah (left) joined Lauren Mahon (front) and Rachael Bland (right) to present the award-winning podcast You, Me and the Big C on Radio 5 Live. Bland tragically died of breast cancer on September 5th that year; her husband Steve Bland now co-presents the show 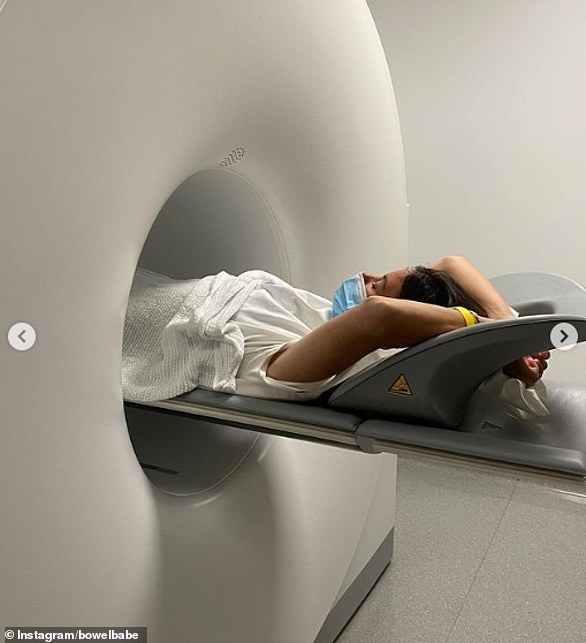 During her treatment, Deborah told followers on Instagram ‘By my general lack of being on here (dancing!), that Things have moved (in the wrong direction) very quickly cancer wise.’ Pictured: Deborah James undergoing a scan at the Royal Marsden Hospital in London

Continuing her Instagram post, Deborah said: ‘But I don’t think anyone can say the last 6 months has exactly been kind! It’s all heartbreaking to be going through but I’m surrounded by so much love that if anything can help me through I hope that will.’

She went on to share news of a ‘Bowelbabe fund’ which is being set up in her name, writing: ‘I always knew there was one thing I always wanted to do before I died.

‘I have always over the years raised as much awareness and money for the charities that are closest to me. @cr_uk @royalmarsden @bowelcanceruk.

‘As a result, the @bowelbabefund is being established and I’d love nothing more than for you to help it flourish. Please visit bowelbabe.org for all the info and to donate (link in Bio).’

It has since raised more than £800,000 in less than 24 hours after it was launched, and will be spent on funding clinical trials and research into personalised medicine that could result in new treatments for cancer patients, and continued support to raise awareness of cancer. 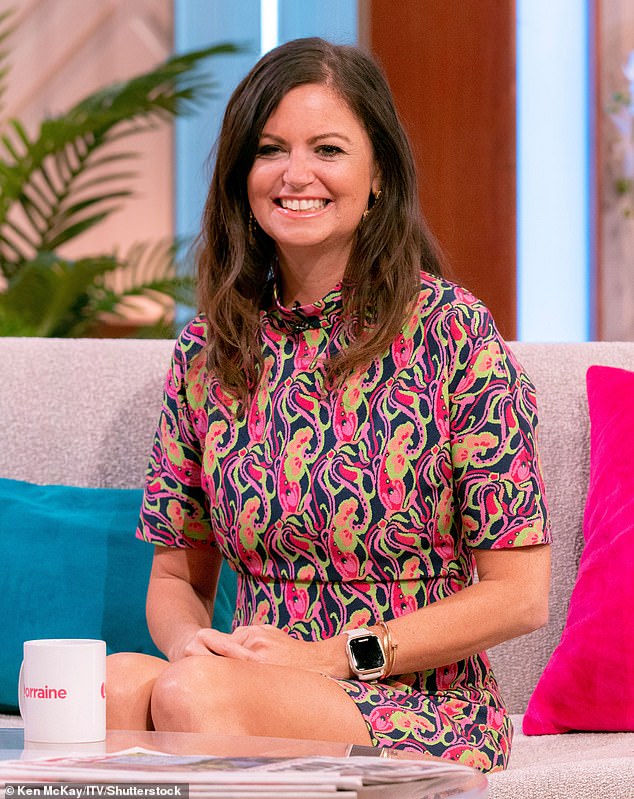 Important: Since she publicly shared her bowel cancer diagnosis, Deborah made several appearances on ITV’s Lorraine 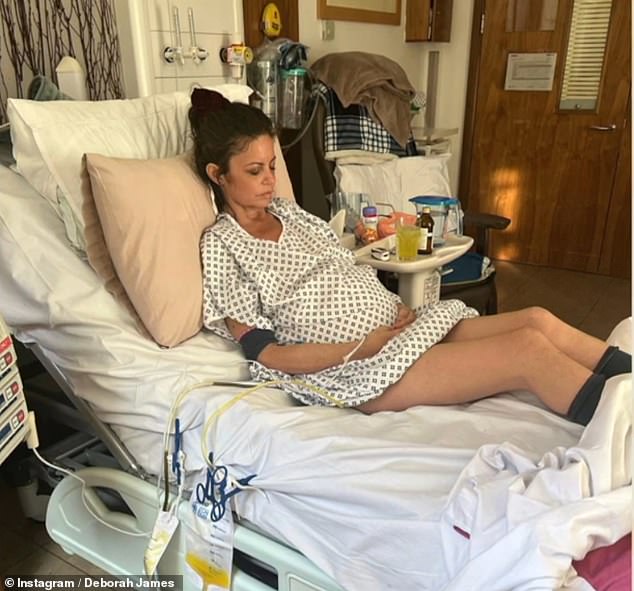 Tough time: Deborah spent months in hospital recovering after she almost died in January due to a medical emergency

Deborah continued in her social media post: ‘All I ask if you ever read a column, followed my Instagram, listened to the podcast or saw me dressed as a poo for no reason.

‘Please buy me a drink to see me out this world, by donating the cost to @bowelbabefund which will enable us to raise funds for further life saving research into cancer. To give more Deborah’s more time!’

As she finished the post, she wrote: ‘Right now for me it’s all about taking it a day at a time, step by step and being grateful for another sunrise.

Bowel, or colorectal, cancer affects the large bowel, which is made up of the colon and rectum.

Most cases have no clear cause, however, people are more at risk if they:

More than nine out of 10 people with stage one bowel cancer survive five years or more after their diagnosis.

This drops significantly if it is diagnosed in later stages.

According to Bowel Cancer UK figures, more than 41,200 people are diagnosed with bowel cancer every year in the UK.

It affects around 40 per 100,000 adults per year in the US, according to the National Cancer Institute.

‘My whole family are around me and we will dance through this together, sunbathing and laughing (I’ll cry!!) at every possible moment!

‘You are all incredible, thank you for playing your part in my journey. No regrets. Enjoy life. Deborah.’

It’s been a difficult year so far for the mother-of-two, who spent much of the last six months receiving in-patient treatment in hospital.

She has spent months recovering after she almost died in January due to a medical emergency.

In January, she said the ‘trauma’ of nearly dying was still ‘very raw and real’ as she returned home after three weeks in hospital.

Posting on Instagram earlier this year, the mother-of-two spoke of enduring the ‘hardest, most heartbreaking and scariest’ period of her cancer battle in the last week, which has involved three operations and ‘a lot more procedures’ to come.

She told how her husband watched as doctors fought to save her life after she ‘crashed’ in resuscitation.

A week ago at this time in the evening I nearly died in what was an acute medical emergency,’ she wrote. ‘I’m not ready to discuss what happened yet as the trauma of it all has been incredibly intense – but it’s thanks to an unbelievable team of NHS specialists who worked all through the night and the next day to save me.

‘I cannot be more grateful. I’m still not out of danger and I have a lot more procedures to deal with. But I’m now out of intensive care. And for the first time felt able to briefly update you.’

Sharing a photo of her giving a thumbs up from a hospital bed, she continued: ‘This is me yesterday having just come round from my 3rd operation this week. I have another operation tomorrow.

‘In five years of having stage four Cancer – this has been the hardest, most heartbreaking and scariest of them all. I’d always prepared for my death, but I wasn’t prepared for something so blindsiding and traumatic to happen.

‘I can’t quite believe I’m here to write this. A week ago my whole family was praying I’d pull through the night. I’m getting a lot of help and support to come to terms with the trauma I’ve been through.

‘My family have been incredible. I don’t know how my husband held it together seeing me crash as an army of doctors stabilised me in resus.’

Last year, James shared that her cancer, which has been kept at bay by pioneering treatment, was back again and she was forced to endure a 12th operation.

The West London mother-of-two, a deputy head, was diagnosed ‘late’ with incurable bowel cancer in 2016.

She has frequently said that as a vegetarian runner, she was the last person doctors expected to get the disease.

After sharing her experiences on living with the disease on social media, Deborah became known as the ‘Bowel Babe’ and began writing a column for the Sun.

In 2018, Deborah joined Lauren and Rachael Bland to present the award-winning podcast You, Me and the Big C on Radio 5 Live. 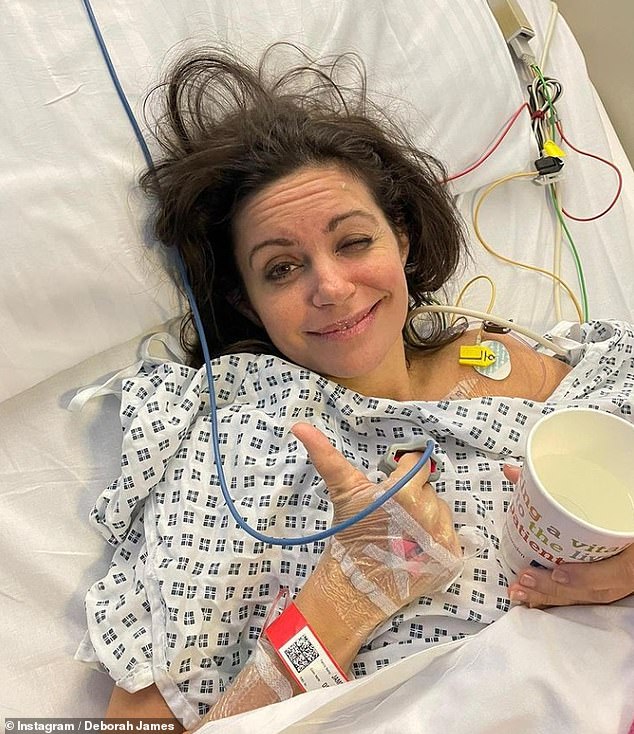 Scary: Deborah, who has incurable bowel cancer, revealed how she ‘nearly died’ in January in an ‘acute medical emergency’