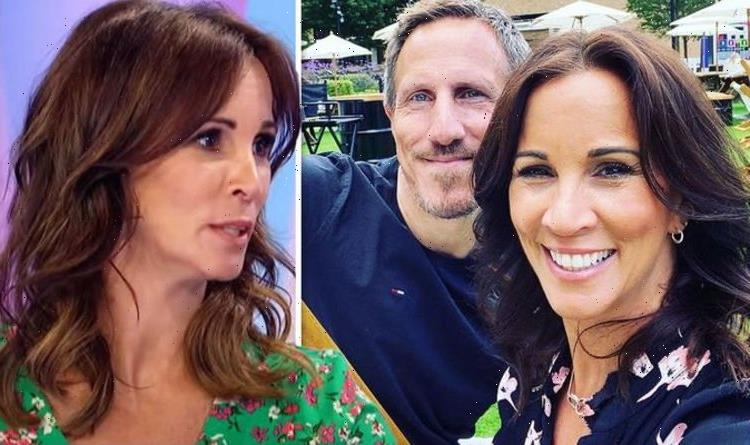 Former Loose Women panellist Andrea McLean, 51, has revealed that she would probably be “on her own” if it hadn’t been for a blind date where she met her third husband. Appearing on the Sliding Doors podcast, the Loose Women star told the host about how she met her husband, Nick Feeney, on a blind date which was set up by a colleague, but thinks that if she hadn’t gone, she’d now be “on her own,” following two previous marriages.

I just think I’d be on my own

After revealing that her make-up artist friend set her up on a blind date, Andrea explained that it ended up being the best thing to have ever happened to her.

She went on to say that at first her date had no idea who she was – until he recognised her as “the one at the end” of the Loose Women panel.

After a hen party recognised the star, they demanded that Andrea’s date take pictures of the meeting before going on to a bar.

The TV anchor said: “So we went and sat down and I proceeded to get very, very drunk and I told him everything about me.

“And I just said, ‘Listen, you know who I am, you can go and Google me when you get home, you’re going to find all kinds of rubbish and 90 percent of it isn’t true.

“This is me, this is my truth, this is who we are and you can either take it or leave it,” she added.

She continued: “Then we went clubbing, which again, in itself is quite rare for me and we went disco dancing, and he turned out to be loads of fun.”

The TV star went on to tell how Nick took her hand to lead her through the busy dancefloor, which Andrea described as feeling like a “bolt of electricity.”

She added that after that, the pair “snogged like teenagers” for 45 minutes before going to find their friends.

Andrea said that her friends were ecstatic that the date was going well, saying: “They were like, ‘We knew you’d get on!’

“But it was the strangest thing as we hadn’t expected that to happen at all,” the TV host continued.

“And then I did something that I’ve never done in my whole life and I just said, ‘Shall we go?’

“And I went home with him and I’d known him for four hours and we’ve been together ever since.”

The pair went on their blind date in 2015 and they tied the knot two years later in November 2017 with a star-studded ceremony.

However, Andrea admitted that her life would look dramatically different if she hadn’t gone on the blind date.

When asked by the presenter how her life would look if she hadn’t gone on the set up, the star quickly asserted that she was positive she’d be on her own.

“Yeah, we’ve spoken about that and I think, being brutally honest, I would be on my own,” she quipped.