Lil Nas X strips down in the ever-creative cover for his debut album, ‘Montero,’ which fans can begin listening to on Sept. 17.

Lil Nas X decided to bear it all in the artwork for his highly-anticipated debut studio album, Montero. The 22-year-old rapper, known for his hit singles such as “Old Town Road” and “Rodeo,” has his very first album coming out on Sept. 17, and he decided to make the wait worthwhile for fans by going completely nude on the album’s cover, which was shared all over social media on Aug. 31. I mean, would we really expect anything less from this superstar?

The Montero album cover shows a fully-nude Lil Nas X lightly floating in the air as his body is engulfed by a bright rainbow. The rapper is surrounded by quite a sight as well, with that being gorgeous green grasslands, pink flowers, butterflies, and the calm blue water. You can also see arches that look like they’re straight out of ancient Europe, as well as a mountaintop. And if you look super closely, there are two miniature (and still naked) versions of Lil Nas X in the left and right-hand sides of the cover.

Lil Nas X shared the cover art alongside his official announcement of when fans can expect the album to finally arrive. “MONTERO” THE DEBUT ALBUM OUT SEP. 17. 2021,” the young star wrote on social media. He also included a link for fans to pre-save the album. Montero will feature 15 tracks, including the already-released singles “Montero (Call Me By Your Name),” “Industry Baby,” and “SUN GOES DOWN.” 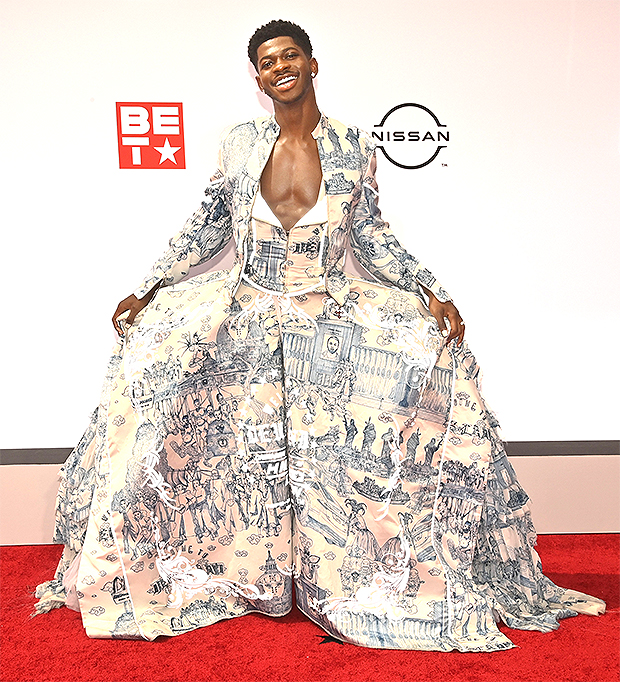 As fans know, Lil Nas X is no stranger to stripping down to make some fantastic music. In fact, the Grammy winner got naked in the music video for “Industry Baby,” which features Lil Nas X showing off his birthday suit for a big dance routine alongside other nude prison inmates before he escapes from jail with the help of Jack Harlow, who is featured on the song. The wild music video was directed by Christian Bresulauer, and the song was produced by Take a Daytrip and Kanye West.

And that wasn’t the only crazy music video Lil Nas X dropped this year. In March, he released the video to “Montero (Call Me By Your Name)”, which showed Lil Nas X giving Satan a lap dance, among other things. The overall meaning of the video was to explore the singer embracing his sexuality as a queer person, but he still received backlash for the risqué footage.