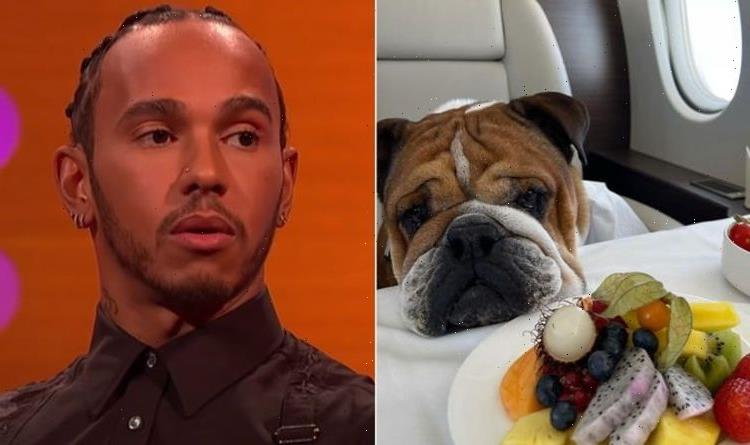 Formula One ace, Lewis Hamilton has previously been dubbed a “woke hypocrite” on social media after discussing climate change. Now, he has fuelled further frustration after boasting about his dog’s planet-saving diet, despite travelling on a private aircraft.

Lewis, 36, frequently shares snaps of his beloved British bulldog Roscoe with his social media followers, with the dog even having his own Instagram page.

The Stevenage-born racer snapped his pooch sitting on a luxury private jet despite speaking about climate change just days before.

Two years ago Lewis, who was knighted in 2020, said he felt like “giving up on everything” following his concerns over the ever-changing planet.

He himself is vegan and his dog has followed a vegan diet for coming up to two years.

Roscoe was sat in a large leather seat with a plate of fruit and vegetables in front of him on a draped table.

Captioning the post, Lewis, pretending to be his dog, penned: “I loves beings a vegans.

The post, that has since racked up over 97,000 likes, was instantly met with mixed reviews.

“Roscoe’s living a more healthier life than me lol,”[sic] joked one fan.

Before a third commented: “Dogs are carnivores,” before adding a hand over the face emoji.

“Doesn’t eat meat, flies on a jet,” penned a fourth.

Meanwhile, Nicole Paley of the Pet Food Manufactures’ Association last year, said: “We advise that vegan diets – with no animal products – are carefully checked by a vet or animal nutritionist.”

Vet Dr Scott Miller added: “Dogs and cats have sharper teeth for catching meat. As much as it makes sense for you to be a vegan, when it comes to our pets it’s going to prove problematic.”

Lewis had originally placed Roscoe on a no-meat diet in order to help with his ailments that bulldogs are known to struggle with, including breathing issues.

The driver’s other dog, Coco, died after suffering from heart problems.

Speaking about climate change, Lewis told Style: “Climate change is a serious threat: every one of us has the responsibility to protect our future and the future of the next generation.

“With the industry, I’m in, I’m always going to receive negative attention but we don’t have to be perfect to be part of the solution.”

He added: “As a powerful voice in my industry, I have a responsibility to effect change from within Formula 1 as well as in all the other activities in which I am involved.

“I’ve done this with Tommy Hilfiger and with Police, just recently I invested in Neat Burger vegan fast-food and I’m working with Mercedes and Daimler on a series of car projects.”