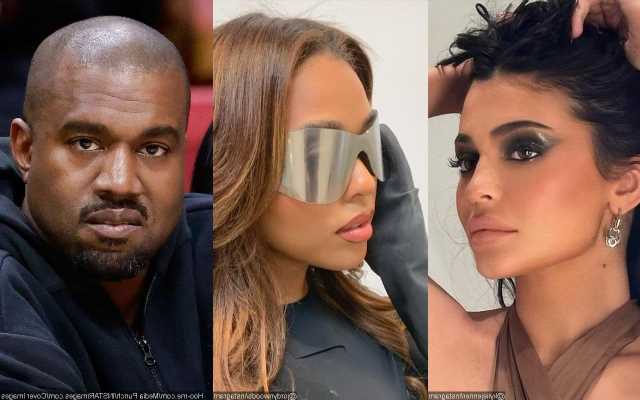 Jordyn’s apparent shady Instagram post comes after Ye slammed his ex-wife Kim Kardashian and her mom Kris Jenner regarding his children’s education and more others.

AceShowbiz -Is Jordyn Woods picking sides amid Kanye West‘s war against the Kardashian-Jenners? The 25-year-old social media star seemingly let the world know that she died with the “Gold Digger” rhymer with her new post on Instagram.

In the said post, Jordyn appeared to shade the famous clan as she and her younger sister Jodie Woods posed in a pair of Ye’s new chrome Yeezy Gap sunglasses. The siblings also donned full all-black outfits which were from the rapper’s label. Jodie opted for a puffer jacket and Jordyn sported a Yeezy Gap bodysuit with built-in gloves.

“YZYSHDZ,” the social media superstar captioned the Thursday, September 8 post. Jordyn didn’t include a #sponcon or #ad tag in the caption, prompting fans to speculate that the post wasn’t for promotional purpose and the two not-so-subtly declared themselves Team Kanye.

“That’s right wear those shades girls,” one follower wrote in the comments section. Meawhile, another user said, “The implications of these pictures.” Someone also complimented Jordyn, who fell out with Kylie following her 2019 scandal with Khloe Kardashian‘s then-boyfriend Tristan Thompson, for her “level of pettiness.”

Jordyn’s apparent shady post came after Ye slammed his ex-wife Kim Kardashian and her mom Kris Jenner regarding his children’s education and more others. In an Instagram post, Ye wrote, “My kids going to Donda. They not going to [their school]. [Charlamagne tha God] and Kris, get your motherf**king popcorn.”

A few minutes later, the Chicago native, who shares North, Chicago, Saint and Psalm with the SKIMS founder, shared a screenshot of his text messages where an unidentified person, presumably Kim, asked him “to stop.” Responding to his ex’s request, he replied, “No, we need to talk in person, you don’t have a say so of where the kids go to school. Why you get say say? Cause you half white?”

Kim then texted Ye, “From my mom- PLEASE. Tell him to please stop mentioning my name. I’m almost 67 years old and I don’t always feel great and this stresses me to no end.” In response to that, Ye replied to his ex, “Y’all don’t have so so over my black children and where they go to school. They will not do playboy and sex tapes.”