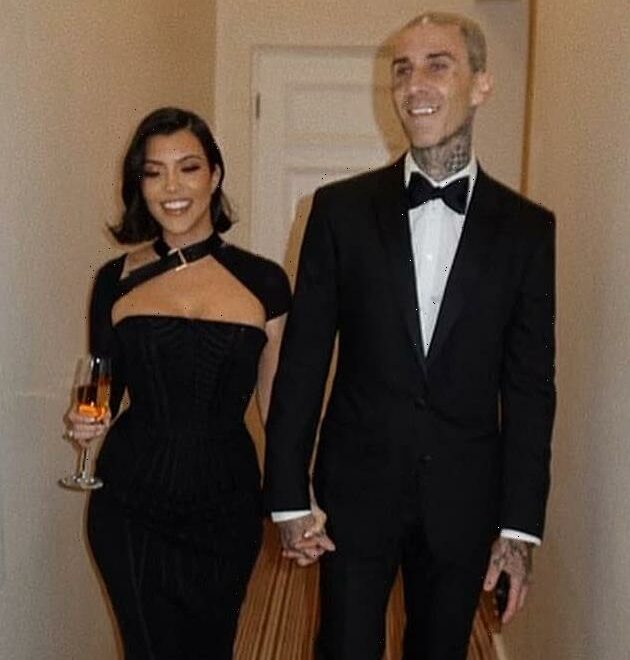 After a whirlwind courtship, Kourtney Kardashian and Travis Barker are married!

Yes, Travis and Kourtney got “married” once before.

But their quickie wedding nuptials were just a dress rehearsal, a warm-up for the main event.

On Sunday, Kourtney and Travis got legally married in a small, private ceremony in Santa Barbara.

It’s an exciting time for these two lovebirds — and if you thought they were done getting hitched, then you’ve got another thing coming!

“They had to legally get married first ahead of their big Italian wedding, which is happening very soon,” a source close to the situation tells People magazine.

“All the details are set and the whole family, including all the kids, are very excited.”

Yes, Kourtney and Travis have already made plans for a third wedding.

It’s unclear why they felt they “had to” get married in Santa Barbara for exchanging vows yet again overseas, bur fortunately, it sounds like these two are not expecting to be showered with gifts at every one of their weddings.

In fact, TMZ is reporting that Kourtney’s sisters weren’t even in attendance at her Santa Barbara wedding.

According to the outlet, Travis and Kourtney were joined only by “bodyguards and a few witnesses” when they exchanged vows at Santa Barbara’s downtown courthouse.

After the ceremony, the newlyeds paused to take photos with Kourtney’s grandmother and Travis’ dad before taking off in a vintage car with a big “Just Married” sign on the back.

The traditional approach extended to the couple’s attire, with Travis decked out in all black and Kourtney in all white.

There’s no word on if Kourt and Travis embarked on a honeymoon, but considering they have another wedding to get ready for, they may have just headed home.

Sounds exhausting to us, but apparently, Kourtney and Travis always planned on getting married a whole bunch of times.

“Once upon a time in a land far, far away (Las Vegas) at 2am, after an epic night and a little tequila, a queen and her handsome king ventured out to the only open chapel with an Elvis and got married (with no license),” Kourtney wrote on Instagram after their first wedding, adding:

Maybe Kourtney is trying to say “I do” more times than Kim has.

Or maybe she’s making up for lost time after spending a decade with Scott Disick, who famously refused to tie knot,

Whatever the case, insiders have indicated that Kourt and Trav are planning to spent the rest of 2022 getting re-hitched.

Yes, after the Italian ceremony, there might be more weddings to come.

Neither party has posted any pics from their latest nuptials, but we’re sure they’re coming soon.

In the meantime, our sincere congratulations go out to Kourtney and Travis, who are not legally man and wife.

Someone should probably check on Scott, because we’re guessing that dude is less than thrilled with this latest development.