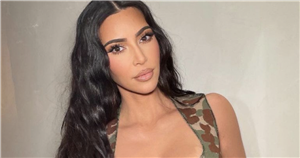 Kim Kardashian has joined her Los Angeles celeb pals and went all out decorating her home with lights.

LA stars have lined their mansions with elaborate lights and decorated their gardens like Christmas trees.

The Keeping Up With The Kardashians star, 41, has spent a hefty $60million (£45million) on her Hidden Hills estate in the west end of the San Fernando Valley.

The aerial shot shows the full breadth of Kim's domestic lighting display with trees lit all around the estate.

The reality star has covered a vast amount of her outdoor space with festive cheer which outlines her extensive residential plot.

The glittering white lights illuminate her long drive like a runway landing strip.

This is just the tip of the festive iceberg for the superstar, as, throughout December, she has hired a Grammy-winning pianist to serenade her family with Christmas songs.

Kim has also recently bought out her ex husband, Kanye West for $20million in cash for sole ownership of their marital home.

According to TMZ he officially 'signed over his rights to the property' which they bought seven years ago, in October.

Kanye, 44, is reportedly not ready to let Kim go despite his estranged wife filing documents to remove her married name.

This Christmas will be the SKIMS founder's first since filing for divorce.

Kim has alleged also spent an additional $3million on the home's contents.

This winter, love is in the air as she is reportedly dating SNL comedian Pete Davidson after the pair met co-hosting a recent episode.

During their sketches on the show, the pair dressed up as iconic Disney lovebirds Aladdin and Jasmine and apparently hit it off straight away.

Nearby celebs have also joined in the Christmas light extravaganza and have decked out their houses, driveways and gardens.

Neighbours who have taken part in the switch on include the likes her siblings Kourtney Kardashian and Kylie Jenner, Jeff Bezos and Lauren Sanchez and Jamie Foxx to name a few.

For more juicy gossip on your favourite stars, sign up to our daily newsletter here