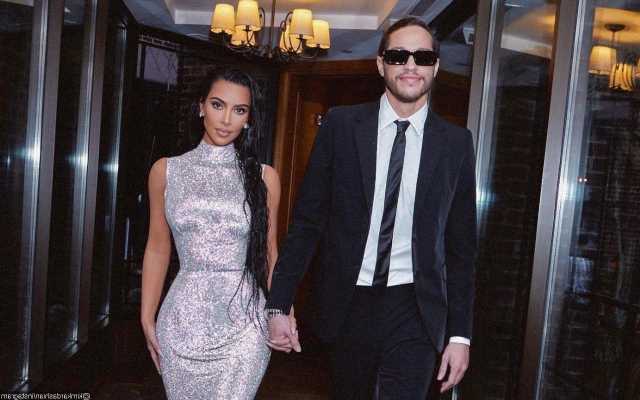 Although their different ‘time zones and filming call times make talking difficult,’ the ‘Kardashians’ star and the ‘Saturday Night Live’ alum are reportedly not letting it get in the way of their relationship.

AceShowbiz –Kim Kardashian and Pete Davidson remain strong despite being miles apart from each other. The couple, who has been physically separated for weeks now due to their work commitments, reportedly finds long-distance relationship “hard,” but won’t let it get in the way of their hot romance.

“Kim and Pete are in constant communication,” a source spills to Us Weekly on how the pair maintain their relationship. The so-called insider notes that their different “time zones and filming call times make talking difficult.”

“They send each other love notes while the other is sleeping and FaceTime whenever their schedules link up,” the source goes on dishing before adding, “The distance has been hard, but even communicating long-distance is exciting for them.”

Despite not being close to each other, the SKIMS founder and the “Saturday Night Live” alum “can’t get enough of each other,” the insider says. They are “still very smitten with each other and can’t wait until they’re in the same place again,” the source further reveals.

Pete has been in Australia to film his new movie “Wizards!“, while Kim mainly stays in Los Angeles with her four children. In July, she flew Down Under to visit her boyfriend on the set of his movie after four weeks apart.

“They both have busy schedules at the moment, but are still making time to be together,” a source told Us Weekly at the time. “They’re very much enjoying spending time together.”

Another source additionally told E! News, “Kim is heading to Australia to visit Pete this weekend. She wanted to spend time with her kids before she left and did some special travel with them. Now she’s off to see Pete and is very excited.”

Kim’s travel to Australia came after Pete revealed his dream to become a father. “My favorite thing ever, which I have yet to achieve, I wanna have a kid,” he said. “That’s like my dream. It’s like, super corny. It would be so fun. Dress up the little dude,” the comedian continued. “That’s kind of what I’m just preparing for now, is just trying to be as good as a dude, develop and get better so when that happens it’s just easier!”