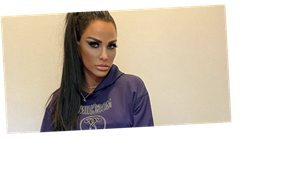 Katie Price’s so-called 'mucky mansion' has been broken into by thieves, the star has revealed.

The star, 42, who recently revealed she’s been sober for a year, visited her former home in Horsham, West Sussex, only to discover that she’d been burgled.

"Sadly it is to be expected Katie will discover more missing items as the house was left ransacked and it takes time to list everything that's gone in an inventory."

The former glamour model took to her YouTube to share her return to the large home for the first time in quite some time.

In the video, Katie reveals: “This house was burgled. So much s*** has gone. Even hard drives have gone.

"Oh well, if anyone wants to go through my old photos go for it. If it makes you feel good."

Katie is no longer living in what people have dubbed her ‘mucky mansion’ and she now lives with beau Carl Woods at his Essex abode.

The star now lives near ex Peter Andre, with whom she shares children Junior, 15, and Princess, 13.

Last year, thieves also reportedly flooded the upstairs of her old home, causing thousands of pounds worth of damage to her new kitchen.

A source told the The Sun at the time: "She is fearful that whoever has done this has a vendetta against her and even thinks it could be linked to her standing up against social media bullying trolls.

"This crime was committed to cause as much impact and personal upset as possible to Katie."

In photos obtained by the publication, the ceiling could be seen caving in as a result of the horrific water damage.

A spokesman for Sussex Police said: "On Monday morning (July 6) police received a report that sometime since the previous day a residential address at Dial Post had been entered by a person or persons unknown.

"The property was not occupied at the time. It was not possible to establish whether anything had been stolen."

A representative for Katie told OK! Online: "I can confirm Katie has been a victim of a break-in and criminal damage. As a result, she's working directly with the Sussex Police who have been amazing in their efforts. We are confident that the assailants will be reprimanded and held accountable.

"Obviously this is a very traumatic time for Katie. Thanks goes to her supporters, friends and family at this time."