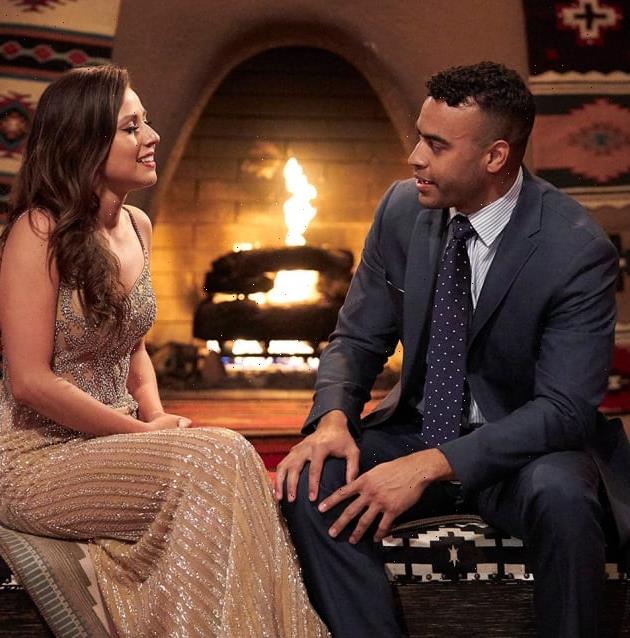 We may have another Rachael Kirkconnell situation on our hands.

On the same day he was given a rose by Katie Thurston on the latest episode of The Bachelorette, Justin Glaze addressed a controversy that popped up over the weekend.

And just like Kirkconnell, whose history of racially-insensitive Tweets nearly brought down the franchise a few months ago, Glaze issued an apology for some very inappropriate messages he sent a long time ago.

The Tweets, which were written between 2009 and 2011, resurfaced on Reddit a couple days ago.

On Monday, the 27-year old appeared on the Bachelor Happy Hour podcast with Becca Kufrin and guest co-host Tayshia Adams to talk about the scandal.

“As I reflect on everything I just went through with this whole journey, oftentimes people ask me what I took from it,” Glaze said on air.

“And one of the biggest takeaways for me was just my personal growth, and one of those things is being able to hold myself accountable, which is something that historically I wasn’t able to do.

“So, I have no issue with owning up and apologizing from the bottom of my heart for the really hurtful words that I used.”

Thurston has not yet addressed Glaze’s Tweets — but she advances Justin all the way to her final four, according to The Bachelorette spoilers.

“The last thing that I want to do is run from it. That’s not who I am,” continued Glaze.

“I just want to speak from the heart, and hopefully, people will get an understanding of where I was then versus where I am now.

“When I look back at 14-year-old Justin, I was in high school and quite frankly I was the type of person who for whatever reason felt the need to fit in and say funny things and keep up with what my peers were doing and saying.

“The folks I had associated with would throw around really hurtful slurs that, at the time, I didn’t really think anything of.”

Glaze added that he doesn’t want anyone to defend him or feel sorry for him. He screwed up and he knows it.

“No matter how long it was, those words shouldn’t have come out of my mouth.

“I’m obviously in a much different place now, over a decade later as a 27-year-old and I can look back and be ashamed of the words that I used…

“I know as I’ve matured and evolved and grown as a person, I’m a totally different version of Justin than I was.”

Kirkconnell, of course, attended a plantation-themed party in 2018.

She also Liked photos of the Confederate Flag on social media.

Earlier this year, she admitted these decisions and this behavior was “racist and wrong.”

Due to how poorly he managed the flap, however, Chris Harrison took a leave of absence from The Bachelor and The Bachelorette and has since left the franchise for good.

Added Glaze on the podcast:

“I know those words would never come out of my mouth, because I know the weight that they carry, no matter what context they’re used in.

“I understand how much allyship and support those groups that I offended need.”

Glaze explained to Kufrin and Adams that the criticism he’s received is a “wake-up call to let me know that I need to continue to put that work in and continue to these groups that need allyship and need support.”

“Unfortunately, [at that time], my underdeveloped brain wasn’t thinking, ‘How can these words hurt people later on in life if they were to ever resurface?’

“I’m not making any excuses.

“I need to be fully held accountable for my actions and my words.

“I fully understand that, and I just want people to know that I’ve changed immensely since then and I’m fully aware of the weight that my words carry.”