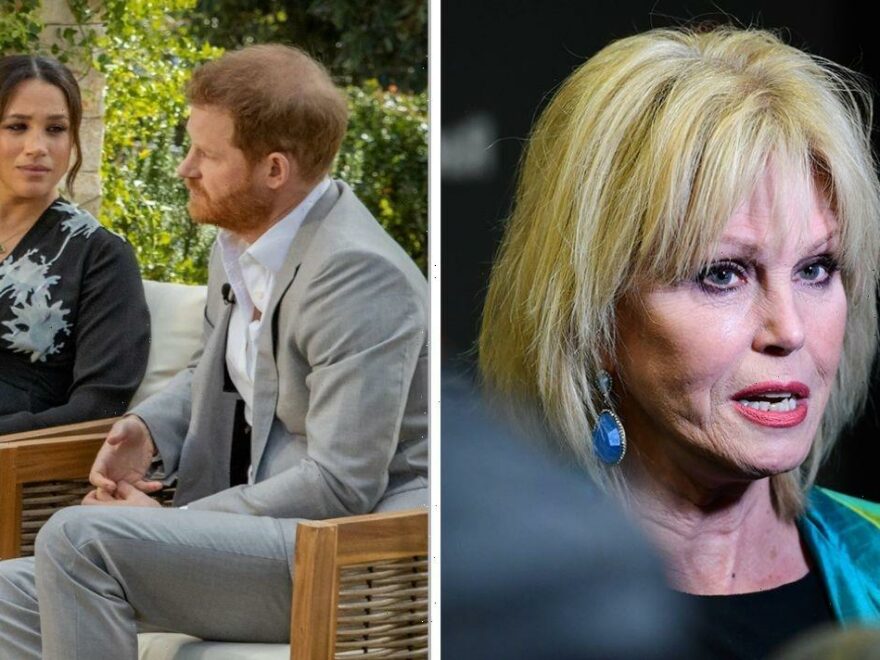 Joanna Lumley, 76, said last year she feels “terribly sorry” for the royal family following Prince Harry and Meghan Markle’s interview with Oprah. The star said she initially tried to avoid watching the tell-all at the time but explained she felt the comments were “one-sided”.

She explained on The Jeremy Vine show in March last year that she didn’t want to “get in too deep” as people can be sensitive about the topic.

Joanna added it seemed one-sided, though, as the Royal Family weren’t allowed to answer back.

The star said: “So no matter what you say, they can’t answer back.

“But you can’t avoid it because everybody’s talking about it, it’s on all the news things and on all the papers.

“I feel terribly sorry about the whole thing.”

“I’m so sorry for that whole family, who we love so much. Everybody was so happy at the wedding and I just think it’s spread a bit of uneasy and unhappiness just when we should be spreading unity and positivism and lots of love.”

In the interview last year, Meghan, 40, made racism claims about Harry’s, 37, family whom she claims were worried about how ‘dark’ their child’s skin would be.

Meghan declined to say which royal had spoken with Harry about Archie’s skin colour, saying it would be “damaging” to them.

Oprah asked if Meghan felt Archie would be denied a title because he is mixed-race, and the duchess replied that concerns about the colour of his skin were raised.

The host, shocked, replied asking her to expand, at which point Meghan said she didn’t want to give away any “damaging” details.

During the interview, the Duchess of Sussex also claimed Kate Middleton made her cry before she married Harry in a row over flowergirl dresses.

Harry also said the royal institution was a “trapping” environment.

He added he felt he had “no where to turn to” when Meghan admitted she was struggling and having suicidal thoughts while pregnant.

The Duchess was close to crying when she told Oprah: “I didn’t want to be alive anymore.”

Despite this, the couple were full of praise for the Queen during the interview, whom Meghan said has “always been wonderful” to her.

The actress said she called the Queen to check in when Prince Philip was in the hospital as an act of kindness.

Meghan also said she was “silenced” by Buckingham Palace officials and felt lonely in London.

She explained she was welcomed by the Royals, but life got harder in the run up to the wedding.

Harry said the couple left because of the British media and because of a “lack of support and understanding” from his family.