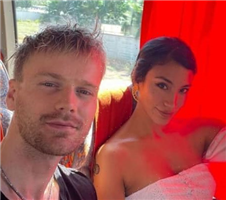 To the collective weirded-out reaction of the 90 Day Fiance world, Jesse Meester and Jeniffer Tarazona are in a relationship.

At least, that’s what they’re saying.

On Season 2 of 90 Day: The Single Life, we are already inundated with their alleged love story.

The only problem is that a lot of fans aren’t buying this random romance. What’s really going on?

When we first met Jeniffer Tarazona and Jesse Meester, they were in very different relationships.

Jeniffer was dating an American, Tim Malcolm, who is from Charlotte.

Jesse of course was dating Darcey Silva, from Connecticut.

The 90 Day Fiance: Before The 90 Days couples did not work out.

That’s a bit of an understatement.

There are a lot of lingering hard feelings and still-spoken insults hurled between the exes.

Now, for the first time in franchise history, two non-American exes are dating each other.

To hear Jeniffer tell it, she just slid into Jesse’s DMs and, ages later, he replied.

From there, the two self-absorbed hotties let nature take its course.

That was not all that they had to say on the season premiere last Friday.

Jeniffer was first seen rock climbing and then talking about her ex and then about this new romance.

Jesse, meanwhile, really showed his ass — not just his bad personality, but his literal posterior. We thought it would never end.

We’re not shaming the guy for his glutes, but you can tell that he lept at the chance to go naked on the streaming platform.

Even in the trailer for the show, he was sure to spend plenty of time in the shower.

Jesse likes to show off, and let’s face it, even if people universally hate him, some don’t mind watching him — when he’s not talking.

When Jesse does speak, he has the general vibe of a mannequin possessed by a self-help cult leader who was also a serial killer.

That has not changed on The Single Life, and he was quick to describe himself as an international entrepreneur.

He also claims to live a life of luxury, and image that he is eager to project while filming.

So why do people think that the Colombian beauty and the Dutch marketing employee working in Russia aren’t a genuine item?

First, because it fits their dispositions.

They both come across as self-absorbed and fame-hungry, even for reality stars.

Then there’s the PDA factor of it all.

Those steamy scenes with the two of them could serve a second purpose, too.

After all, Jeniffer is a model and Jesse is, well, Jesse.

Showering together in the trailer seems like a great opportunity to show the world how hot and desirable they both are.

Their time on the show could basically be one long commercial for their personal brands and, possibly, their continued reality careers.

He even added a homophobic layer to his public feud, accusing Tim of being gay (and yes, that is homophobic, even if the person is straight).

Jesse and Tim have made headlines as a result, which only serves to boost Jesse’s name and ego.

Of course … all of this could be true without the relationship being phony balogna (phony baloney? phogna bologna? whatever).

In their case, “me, myself, and I” might qualify as a belief near and dear to their hearts. Plus, they have similar goals.