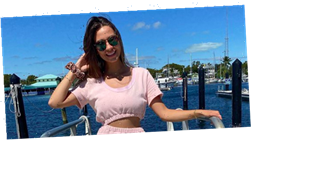 Kelley Flanagan just showed up on Off the Vine with Kaitlyn Bristowe and spilled all kinds of tea about her breakup with Peter Weber. But on top of that, she told Kaitlyn that she is dating a new guy (presumably in Florida—where she’s currently living ahead of her move to NYC).

Exciting! Also, because you probbbbbbbbably want to know what Kelley said about her breakup with Peter, she basically implied that they split because they weren’t communicating well.

She added, “If there is something that I saw as disrespectful in a relationship, I would speak on it and I was pretty vocal…I think communication is huge in a relationship and there were things that essentially I would be like, ‘Hey look, this makes me feel like shit, this makes me feel this way.’ I would always try to talk about my feelings…like, ‘my needs aren’t really being met.'”

FYI, Kelley and Peter are fully not in communication anymore, and Kelley confirmed “I don’t think I will be in communication with him. It’s a place in my past, I’m focusing on my future wishes. I don’t think it was the healthiest thing for me to keep [my] past and [my] future and I wish him well.”

You love Bachelor Nation ’ships. So do we. Let’s overanalyze them together. ✔️✔️✔️