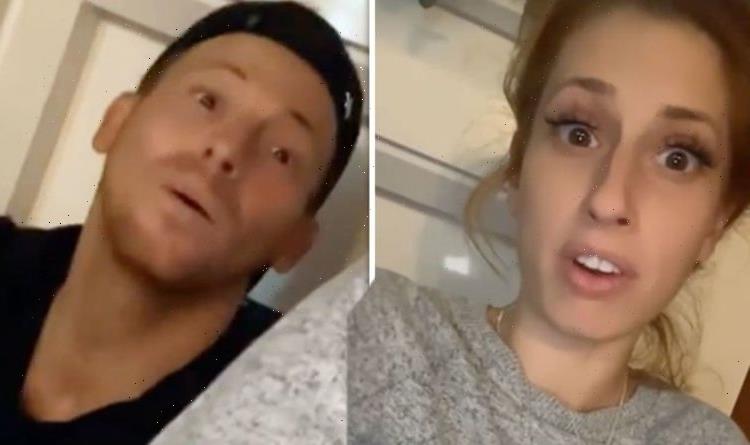 Loose Women panellist Stacey Solomon, 32, has opened up on her emotions after welcoming her fourth child with fiancé Joe Swash, 39. The star gave birth to her baby daughter on her own birthday this week, and has now admitted she hasn’t left her bedroom since.

Stacey candidly shared her experiences and worries as a new mum in view of her 4.7 million Instagram followers this evening.

However, Joe was left less than impressed, as he felt he was being ignored while Stacey chatted to her fans.

Stacey said while cradling her baby girl in bed: “I still haven’t left my bedroom.

“Only to go to the toilet, but I’ve got dressed and now it’s night time again.

“The night comes around so quick doesn’t it?”

The mum-of-four then compared motherhood to fantasy series Game Of Thrones.

In the HBO drama, the characters often warned each other that “winter is coming”, due to their concerns about the dark days ahead.

She explained: “I feel like, you know in Game Of Thrones, when they were all worried about the winter and the long nights coming, I feel like that every time the sun goes down.

Joe’s voice could then be heard, as he objected to his absence from Stacey’s video.

Turning the camera to face her fiancé, Joe told the camera: “Hello, I am here actually!

Feeling bad for snubbing her beau, Stacey apologised to him in the caption of her post.

She penned: “I still haven’t ventured out of my bedroom other than to go for a wee, the days seem to be flying by straight into the night.”

The TV presenter went on to reveal she often feels “a bit of dread” when the evening approaches since giving birth.

She added: “I get a bit sad when the sun goes down. I don’t know why. Just get a bit of dread.

“Like how they must have felt in Game Of Thrones knowing the long night was coming.”

Apologising for ignoring Joe, Stacey added: “Sorry bubs @realjoeswashy I actually don’t know what I’m doing most of the time its all a bit of a fuzz but I hope you’re all ok.

“Happy whatever day it is today,” the exhausted mum quipped.

Stacey is also mum to 13-year-old Zachary, nine-year-old Leighton from previous relationships, and two-year-old Rex, who she shares with Joe.

The actor is also dad to 14-year-old Harry.