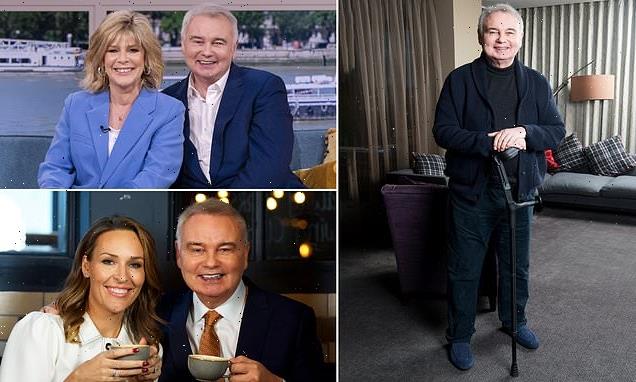 ‘Ruthie, there’s a bone sticking out of my shoulder… I’m not fine!’: In his first interview since a horrifying fall, Eamonn Holmes reveals how it was a member of S Club 7 who got him back on his feet

When Eamonn Holmes found himself seated alongside Hollywood star Liam Neeson on a flight from Belfast to London a couple of years ago, he decided to ask the then 68-year-old how he kept fit for his action roles.

‘He said, ‘Motion is the lotion, Eamonn’ —meaning you have to keep moving, because otherwise it’s all over,’ he recalls. ‘I’ve thought about that a lot recently.’

And little wonder, given the series of calamitous health issues that have befallen the veteran presenter in the last two years.

Already walking with a stick, courtesy of three slipped discs that affected the movement of his right leg, spinal surgery last September left him with a weakened left leg, too. 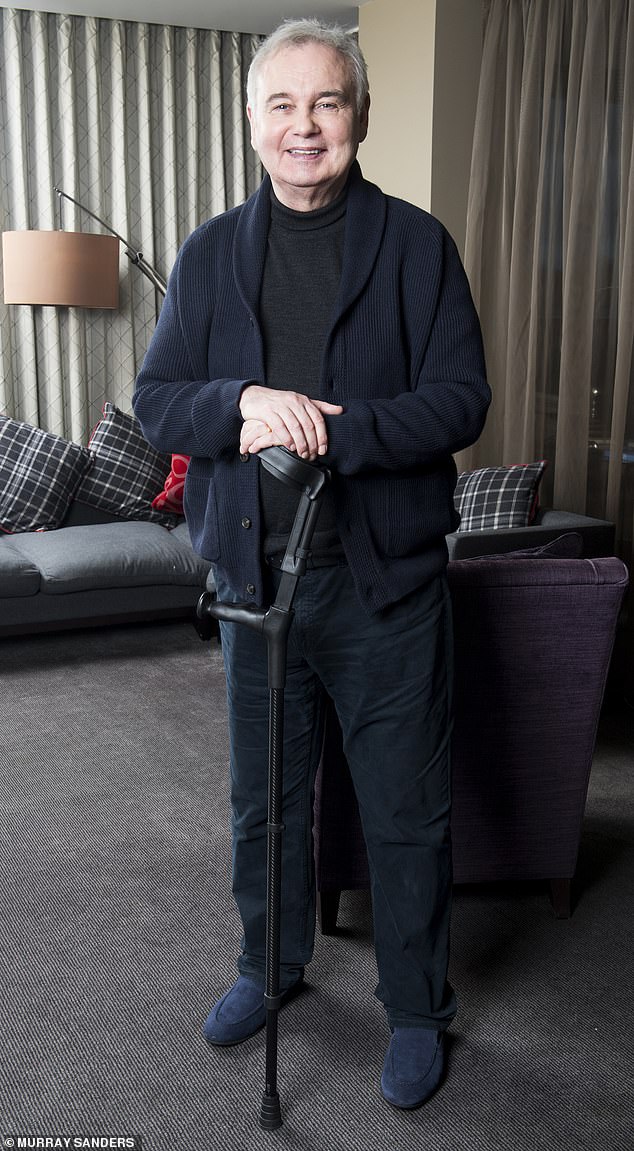 Eamonn fell backwards down 18 stairs at the Weybridge home he shares with wife Ruth Langsford, hitting the stone floor at the bottom 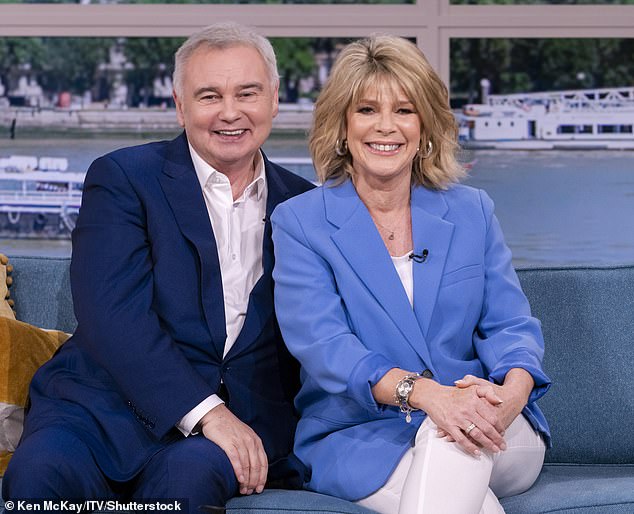 In November 2021, he and Ruth (left) were unexpectedly dropped as presenters of ITV’s This Morning after 15 years

Then, just over two weeks into his recovery from the operation, Eamonn fell backwards down 18 stairs at the Weybridge home he shares with wife Ruth Langsford, hitting the stone floor at the bottom.

The horrific accident could easily have killed him. Instead, he emerged with a broken shoulder, and his legs further weakened.

‘There’s no connection between my waist and my legs, so I need a frame, crutches or a wheelchair to get around,’ he confides. ‘The knee can give way at any time.

‘I’m better than I was, and I am getting better all the time, but the scary thing is that, at the moment, I don’t know if I’m going to get back to how I was.’ He shakes his head. ‘I would give anything just to be able to walk my dog or play a round of golf like I used to.’

There is no question that 63-year-old Eamonn has been brought horribly low by recent events. He arrives at this, his first full and candid interview about the events of recent months, walking gingerly on crutches — and while his waspish humour remains in evidence, it is matched in equal measure by frustration and emotion.

It’s certainly been a less-than-ideal couple of years: in November 2021, he and Ruth were unexpectedly dropped as presenters of ITV’s This Morning after 15 years.

Eamonn was furious at what he condemned as ITV’s ‘sly’ treatment, saying he was never given a reason for his release, but puts it down to middle-aged white managers wanting to promote diversity on screen.

There’s also the small matter of an ongoing dispute with HMRC over a £250,000 backdated tax bill, which Eamonn was hit with in 2018, something he has described as a ‘humiliating’ experience, insisting he is no ‘tax dodger’. It is currently no closer to resolution. 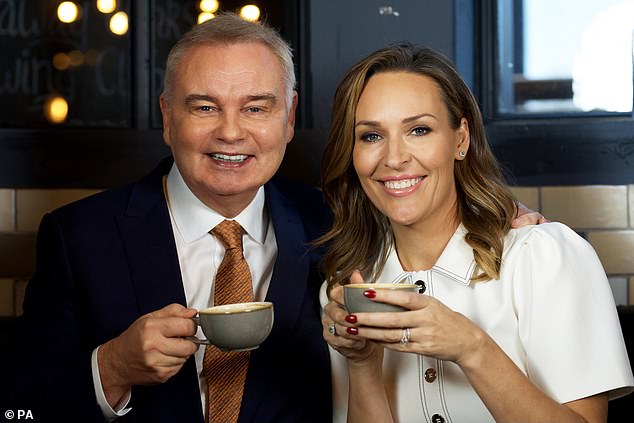 Thank goodness for GB News then, which signed up Eamonn last January to co-present its breakfast show alongside his old Sky News sparring partner Isabel Webster.

Little could they have foreseen that he would spend four months of his first year off sick.

Eamonn had already had a double hip replacement in 2015 at the age of 55 — later saying it was something he should have done years earlier.

He made a good recovery, and after years of struggling with his weight —something he has been notoriously touchy about in the past — even lost three stone following a largely juice diet.

He kept the weight off, but by spring 2021, he started experiencing severe back pain, which came out of nowhere.

‘People kept asking what it was about, as if I’d had a skiing accident or something,’ he says. ‘The answer is I honestly don’t know how it happened.’

A scan revealed three protruding discs. ‘I still thought it would go away, but it didn’t. The knock-on effect was that I lost a lot of use in my right leg,’ he says.

‘I got epidural injections, which helped to a degree, but didn’t cure the problem. I started using a stick, so life was already becoming more curtailed.’

Things took a turn for the worse when, last May, he flew to Belfast to host an event in honour of close friend, broadcasting legend Gloria Hunniford, and ended up in A&E at the city’s Royal Victoria Hospital, after his spinal problems caused bladder and bowel issues.

Eamonn was immediately admitted for emergency surgery, only for the operation to be postponed at the last minute.

‘The surgeon was standing over me, all masked up and ready to operate, but then decided it was too complicated.

‘The spine and all the nerves that lead off it affect so many other things, which he felt needed to be addressed first. I was crushed,’ he recalls. ‘I had been in severe pain for a year, and I desperately hoped this might be the answer.’

Instead, he spent nine days being monitored in hospital before returning to the UK — to a full work schedule, culminating in live coverage of the death of the Queen in September.

‘By now my left leg wasn’t working well either,’ he says. ‘I had to rely heavily on Isabel, who was bearing my weight, getting me round. It was horrendous.’

He mentioned his troubles in passing on social media and was contacted by singer and former S Club 7 member Jo O’Meara, whom he knows from the showbusiness circuit and who has also suffered extensive back problems.

‘She got in touch to say she had the same disc problems I did and had just had surgery with a German surgeon,’ he says. ‘I asked if she could pass on his details, because by now I was desperate.’

After contacting the surgeon, Eamonn went under the knife in late September. ‘It went well — the doctor tidied things up, and generally the pain has gone, which is brilliant,’ he says.

‘The flip side is that it has now left me with an issue in my left leg, which would collapse unexpectedly.’

He laughs wryly. ‘So it was a case of ‘the good news is that your back’s better — but now your legs don’t work.’ ‘

Back home, the consequences were ‘frightening’. ‘Just simple things like getting up out of a chair — my leg would collapse underneath me, and I would fall,’ he recalls. ‘Having never fallen before in my life, over a two-week period I had something like six falls in ten days. It was brutal.’

And no incident more so than the accident in the small hours of October 11 last year.

Ruth had already gone to bed when, around 2am, Eamonn headed up the spiral staircase in their six-bedroom mansion, which leads to their bedroom. ‘Suddenly it was as if someone had shot my left knee from behind,’ he says.

‘It literally collapsed without any warning. I was on a curve of the stairs, and I just went back down the stairs, boom, boom, boom down the whole staircase until I hit the stone floor in the hallway.’

Eamonn’s body had rotated on the way down and he fell onto his front, slashing his lip.

‘Blood was pouring out my mouth, and a bone was sticking out my shoulder,’ he says.

‘Ruth came rushing down the stairs. She kept saying, ‘You’re fine, everything’s okay, you’re fine.’ I said, ‘Ruthie, there is a bone sticking out of my shoulder — I’m not fine.’ ‘

After calling an ambulance, Ruth was told it would be a daunting four-hour wait.

‘What can you do?’ Eamonn shrugs. ‘Ruthie put a pillow under my head and sat with me in the hall and we tried to sleep.’

In the event the ambulance arrived in two hours, and Eamonn was taken to St Peter’s Hospital in Chertsey. He underwent surgery on his shoulder and remained there a week, before moving to a private rehabilitation centre where he stayed for six weeks.

‘The most awful thing is the sense of helplessness,’ he says.

‘I can’t get out of a chair without help; I can’t just get myself a glass of water. I have to lean on people a lot. It’s a big strain on everybody — particularly Ruthie.’

Eamonn admits that at the time he was feeling bleak about the future. ‘Being ill is very isolating,’ he says. ‘Then, just as I was thinking the year couldn’t get any worse there was my poor mum.’

Eamonn’s mother Josie was just two weeks away from her 94th birthday when she died in mid-November, after months of deteriorating health.

All the family — Eamonn’s four brothers and Josie herself — knew she had little time left, and Eamonn is able to summon a smile as he recalls one of their final conversations, during which he told her that his mobility issues meant he would be unable to attend the funeral.’

‘She told me she didn’t want me there anyway, and said, ‘If you’re there, everybody will be talking about you and wanting to shake your hand and it’s my day, it’s not your day.’

‘That was typical of her. But it’s something I never thought I would have to face in life — not being at my mother’s funeral,’ he says, his eyes filling with tears.

‘That was a terrible low. It was just inconceivable being Irish Catholic that you wouldn’t be carrying your mother’s coffin.’ That job fell to his siblings, with whom he remains close. ‘We’re not the Waltons, but we’re tight,’ he says.

Eamonn confesses that he struggles to relate to the rancour between the royal brothers, currently playing out so vividly in the public eye at the moment.

‘I look at them and I think, ‘For God’s sake, dust yourselves down, go and buy a pint and get on with it.

‘I honestly could never imagine not speaking with one of my brothers,’ he adds.

Mention of the Prince of Wales and the Duke of Sussex is a reminder that it was a light-hearted remark made by Eamonn about Prince Harry last year that led to a deluge of complaints to Ofcom.

In an interview with American network NBC in April — ahead of the Queen’s jubilee — Harry had remarked on the Today show that he wanted to ensure his grandmother was ‘protected’ and had ‘the right people around her’.

‘Why wouldn’t they just throw him over the balcony and her [Meghan] with him?’ Eamonn quipped on the following morning’s GB News. A social media uproar followed.

Eamonn is seldom out of the headlines, although he confides that he’s minded to self-censor more than he used to.

He is delighted to be back on the news frontline, though. At the moment he is doing three days a week, but hopes to soon return full-time, although his focus for the immediate future is getting back on his feet.

‘I am visualising myself walking: ‘Motion is the lotion’ as Liam told me,’ he says. ‘That’s my inspiration. Ultimately, you have to have hope.’