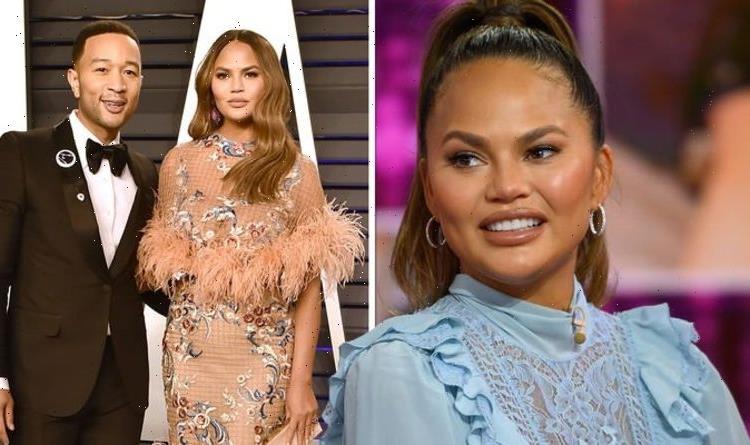 Chrissy Teigen, 35, took to Instagram to tearfully share she’d received letters fans had sent her and her husband John Legend, 42. The couple suffered pregnancy loss back in September, which she shared at the time with her followers.

The author and model has now revealed she and John have only just received many of the letters sent to them at the time.

Chrissy can be seen showing the many letters in the video as she mentions why they’ve only just got them.

She said: “This is just piles of letters that we just got because the place we usually get mail from, where you guys send mail, has been shut down and it opened back up.

“And now we got everything, so, if you sent us…

“You guys sent the most amazing condolence letters and cards and books and I just want you to know we got all of them.”

She then shared another post singling out a particular letter they had received.

This was written by someone who said planned to light a candle in Jack’s honour for October’s Pregnancy and Infant Loss Awareness Month.

Chrissy continued: “I got this okay? I got it and I love you.”

The social media personality shared back on September 30, 2020 how she and John had lost their unborn baby.

In a harrowing post, she shared images of the pair in hospital.

She wrote: “We are shocked and in the kind of deep pain you only hear about, the kind of pain we’ve never felt before.

“We were never able to stop the bleeding and give our baby the fluids he needed, despite bags and bags of blood transfusions. It just wasn’t enough.

“We never decide on our babies’ names until the last possible moment after they’re born, just before we leave the hospital.

“But we, for some reason, had started to call this little guy in my belly Jack. So he will always be Jack to us.

“Jack worked so hard to be a part of our little family, and he will be, forever.”

Chrissy later opened up in an essay about why she decided to share the heartbreaking moment publicly.

She wrote: “I cannot express how little I care that you hate the photos.

“How little I care that it’s something you wouldn’t have done.

“I lived it, I chose to do it, and more than anything, these photos aren’t for anyone but the people who have lived this or are curious enough to wonder what something like this is like.

“These photos are only for the people who need them. The thoughts of others do not matter to me.”