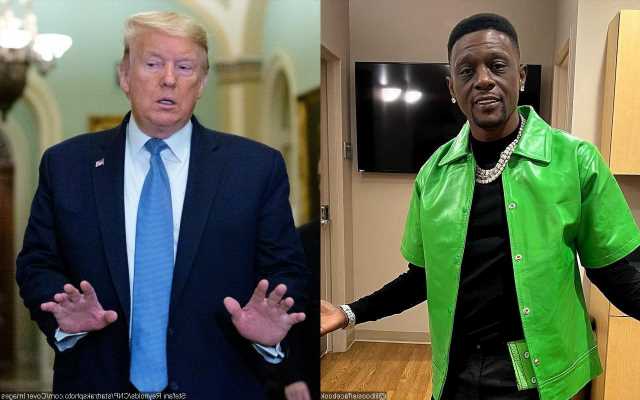 The Baton Rouge rapper takes to his Twitter account to share a strong message for the former POTUS after he called for lawmakers to pass a law mandating the death penalty for drug dealers.

AceShowbiz -Boosie Badazz (Lil Boosie) isn’t a fan of Donald Trump and it shows. The Baton Rouge rapper has a strong message for the former POTUS after he called for lawmakers to pass a law mandating the death penalty for drug dealers.

Trump made the comments when he addressed a crowd of supporters during a speech at his Mar-a-Lago residence and resort in Palm Beach, Florida on Tuesday, November 15. “Every drug dealer during his or her life on average will kill 500 people with the drugs they sell,” he said. “We’re going to be asking everyone who sells drugs, gets caught selling drugs, to receive the death penalty for their heinous acts.”

This wasn’t the first time for Trump to share the sentiment. “The penalties should be very, very severe,” he stated back in July. “If you look at countries throughout the world, the ones that don’t have a drug problem are ones that institute a very quick trial death penalty sentence for drug dealers.”

In Trump’s recent speech, he also announced his 2024 presidential bid. “In order to make America great and glorious again, I tonight am announcing my candidacy for president of the United States,” so he told his supporters. “But just as I promised in 2016, I am your voice. I am your voice.”

“The Washington establishment wants to silence us, but we will not let them do that. What we have built together over the past six years is the greatest movement in history because it is not about politics. It’s about our love for this great country, America, and we’re not going to let it fail,” he went on saying.

Blaming President Joe Biden for the current state of the nation, the businessman-turned-politician, who lost to Biden in 2020 presidential election, added, “I am running because I believe the world has not yet seen the true glory of what this nation can be. We have not reached that pinnacle, believe it or not.”