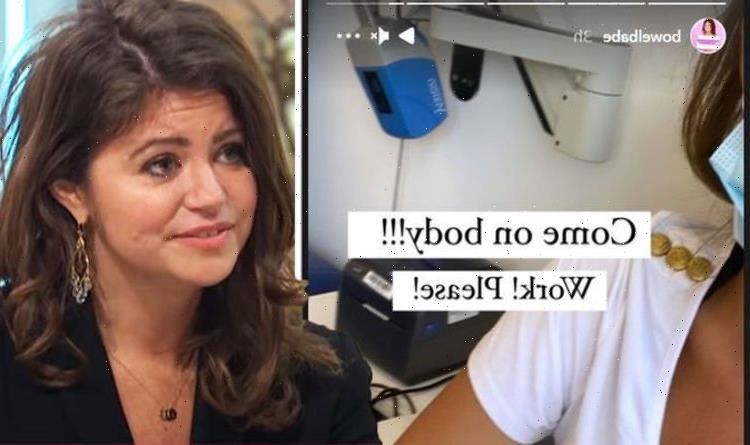 Former deputy headteacher Deborah James, 39, has issued a plea for her body to “work” as she continues to receive treatment for her stage 4 bowel cancer. Just days ago the mum-of-two underwent a gruelling chemotherapy treatment and “life-saving procedure” which left her feeling “wobbly” after attending the men’s final at Wimbledon.

In view of her 179,000 followers, the broadcaster posted a snap of her in hospital to her stories.

Wearing a mask, the star wore a simple white t-shirt as she pictured her arm which had been patched up and lay resting on her leg.

Yesterday, the star shared a story of her playing with her son as she revealed that she was getting a next “plan of action” from The Royal Marsden hospital.

At the start of the month, Bowel Babe revealed over social media that she had been rushed to hospital with a “spiking fever” amid her battle with cancer.

Previous to this, Deborah shared that her “drugs have stopped working” and her “liver is failing”, leading her to have a stent fitted and starting chemotherapy once again.

However, despite undergoing the treatment, the media personality managed to attend the SW19 championships with her husband Sebastian Bowen and two children, refusing to miss an “opportunity to make memories”.

She wrote: “Yes I’m extremely wobbly, and it took an army of help, and perfectly timed windows of energy, with lots of assistance – and yes I’m already at home in bed resting!

“But after the last week, an opportunity to make memories with my family is what it’s all about.”

The podcast host continued: “When I was in hospital, my husband even went shopping with the team for the outfits and virtually included me!

“After thanking Ralph Lauren for supporting The Royal Marsden hospital, the Instagram star added that she was now back home and “resting” after a long day.

“I’m now back on my parent’s sofa with all the family, feeling shattered, but elated to have made it,” she wrote.

Days before her appearance at the Wimbledon finals, the You, Me and the Big C presenter revealed that she had been taken to hospital following a “spike” in her fever.

Speaking from her hospital bed, Deborah said: “Hey team, how are we?

“Hello from hospital again where I am currently being pumped full of antibiotics and loads of fluids just to get my fever down.

“Essentially, when you’re on chemo your immune system is a little bit wrecked,” she added.

The star previously revealed that she was starting chemotherapy again after her liver function improved after having a stent fitted.

Continuing, Deborah said: “So, as soon as you spike a fever you have to go in and then there’s protocols that kind of say we have to get it down, treat it.

“So I’m feeling tired and a little bit fed up with being here again.”

Deborah was first diagnosed with incurable bowel cancer back in 2016, has continued to undergo treatment.