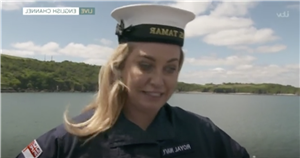 Alison Hammond has been left feeling baffled after noticing her friend Josie Gibson had stolen her handbag live on This Morning.

The TV presenter, who recently recreated adorable then-and-now photos with her rarely seen son, appeared on the show on Friday 25 June to speak to Josie, 36, while she was onboard the HMS Tamar on the English Channel.

Nearing the end of their conversation, Alison, who could be seen dressed in a gorgeous bright green dress with a yellow jacket, said between giggles: "Can I just say, before you go Josie, you have got my handbag there.

Looking sheepish, Josie, who donned a pilot's outfit complete with a hat, responded: "Oh no, I was hoping you wouldn't notice," before leaning over to pick up the beige knitted bag with a black frill.

Clearly unimpressed, 46 year old Alison continued: "You better bring that back, that's my handbag! It's not yours."

Stuttering, Josie went on: "It's not… It's mine now…" as Alison added between giggles: "Have a lovely day Josie. Love ya!"

Josie, who was recently nearly sick during a live show as she went on a terrifying rollercoaster, then pulled a face before replying: "Love you! Love you, love you," as she went off screen.

Alison's co-host Dermot O'Leary, 48, then chimed in to say: "Can't ask for that back. That's Josie's now. You've gotta give her the bag," to which she responded: "I'll give it her, I'll give it her…"

He then questioned: "How did she end up getting your bag?" as Alison, puzzled, replied: "I have no idea. I'll talk to her later…"

It comes after Alison recently shut down a troll who slammed her presenting style in the best way after a viewer claimed she "messes up".

“Why do we need to see @AlisonHammond ? It’s bad enough that she messes up Fridays – which I no longer watch,” the user tweeted, in response to a recent post from This Morning’s official page.

Hitting back in a hilarious manner, Alison responded: “I’m so loved,” alongside a smiling face with hearts emoji.

A follower later defended Alison, tweeting: “I’m glad you’ve chosen to focus on all the lovely comments about you rather than the one unnecessarily mean one. You are so loved Alison,” to which she wrote back: “It’s what we do, thanks for the love. I needed it.”

Her co-star Josie also rushed to publicly support her following the cruel comment.

She wrote: “Val you know in your heart you still tune in. Alison is so loved… she’s the woman of the people. She kind hearted, funny, and addictive with the soul of an angel. We LOVE our Hammando!!!”