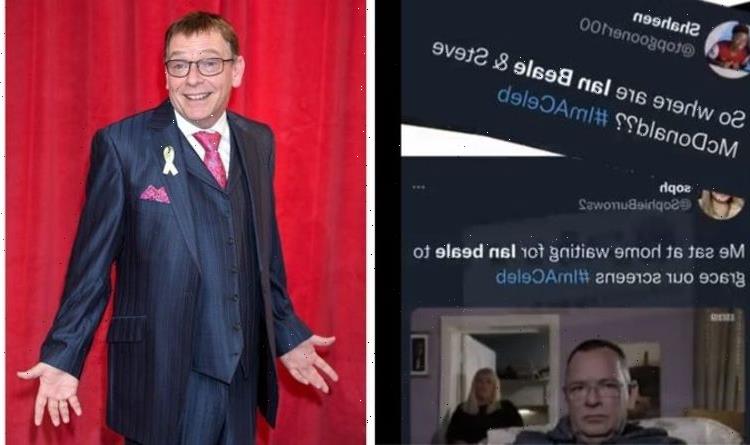 I'm a Celeb: Adam Woodyatt teases fans ahead of entry

Fans of Adam Woodyatt are unhappy about seeing little of him in I’m A Celebrity… Get Me Out Of Here! 2021 so far. After they took to social media to express their disappointment, the 53-year-old’s team got in on the debate, posting a collage of queries about his supposed disappearance to his 294,000 Twitter followers.

This is like going back to being a caveman!

SophieBurrows2 had posted a photo of a very disgruntled looking Adam sulking in his EastEnders role as Ian Beale, and captioned it: “Me sat at home waiting for Ian Beale to grace our screens #I’mACeleb.”

Lorna Jayne added: “Not taking this show seriously until Ian Beale and Steve McDonald get in there and give the people what they want.”

It was even perceived that the highly sought after star was going to “save the show”.

Adam, whose Twitter account is being managed by a friend while he is holed up in the I’m A Celeb castle in Wales, posted a photo of a moody looking Phil Mitchell in a cafe.

They captioned it last night: “Just seen this on the trending tweets. Even Phil Mitchell was disappointed by the lack of Adam on @imacelebrity tonight.”

They added the amusing hashtag: “#KeepItBeale.”

Another jokey tweet last night added: “We may not have seen much of Adam tonight but we got a follow from @SunnyTheRobin,” referring to the account allegedly run by “Naughty Boy’s BFF”, the “most well known celeb on I’m A Celeb 2021”.

Adam’s account followed up with a tweet saying: “We love you more @NaughtyBoyMusic,” only for Naughty Boy’s official account to respond: “It’s banter! We love you @adamwoodyatt.”

The humour kept coming from Adam’s account throughout the evening, with one tweet teasing: “Tonight’s show is missing testicles. And Adam. More Adam please.”

An earlier post was accompanied by a meme joking that he would be “creating new ITV accounts to vote for Ian Beale every night”.

Escape to the Chateau stars spark frenzy with announcement [BREAKING]

The soap star has also expressed his strong desire to win, arguing in a clip for the show: “Anybody who sits here and says ‘No, no, no, no, I really don’t want to be King of the Castle or Queen of the Castle, I just wanna be taking part’ – rubbish! You want to come first!”

His competitive instinct will no doubt be unveiled in the weeks to come.

However he has also acknowledged bluntly: “I’m going to be about as much use as a chocolate teapot.

“I was no use in Scouts – I can’t remember any of the knots.

“Just cooking with fire – this is like going back to being a caveman!”

In spite of the adversity, Adam has been portraying a much happier face than usually seen in his rollercoaster ride soap role – and the excitement looks set to continue.