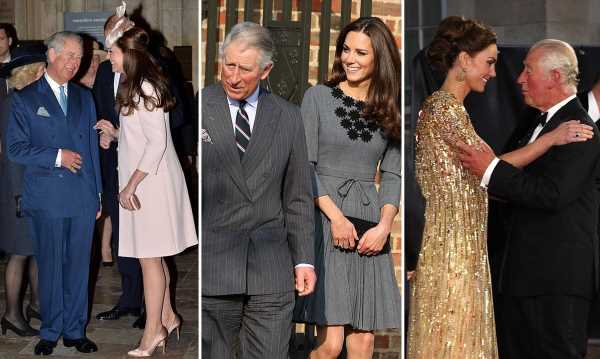 The Duchess of Cambridge has been part of the royal fold for over a decade now and she appears to share a close bond with the family, including her father-in-law, the Prince of Wales.

Photographers captured the sweet greeting between Kate and Prince Charles as they arrived at the world premiere of James Bond: No Time To Die in September 2021, but there’s been plenty of similar moments between the pair over the years.

Having once described Kate as his “darling daughter-in-law,” their admiration and respect for one another is evident. For one of her first ever solo engagements in October 2011, the Duchess stepped in for her father-in-law at the In Kind Direct reception at Clarence House, where she charmed the room.

When asked about being introduced to the royal family in her engagement interview in 2010, the future Duchess revealed: “I was quite nervous about meeting William’s father, but he was very, very welcoming, very friendly, it couldn’t have gone easier really for me.”

Take a look at Kate and Charles’ sweetest moments through the years.

The camaraderie between Prince Charles and his daughter-in-law was very much apparent on a visit to Dulwich Picture Gallery. The pair enjoyed a giggle as they got involved with the arts and crafts.

We love this shot of Charles, William and Kate laughing together during a visit to Dumfries House in 2013. Oh to be a fly on the wall!

The Duchess greeted her father-in-law warmly as the royal family attended the Passchendaele Commemorations in Ypres, Belgium in 2017.

Kate has attended several royal engagements with Prince Charles and the Duchess of Cornwall over the years, particularly when Prince William was working away as a search and rescue pilot. The trio looked like they had the best time at a Buckingham Palace garden party in 2012.

The Duchess also joined Charles and Camilla at another garden party a year later, when she was expecting her first child, Prince George. Charles is grandfather to the Cambridges’ three children, George, Princess Charlotte and Prince Louis, as well as the Duke and Duchess of Sussex’s son, Archie, and their baby girl, Lilibet.

MORE: 20 brilliant photos of the royals in hysterics that are guaranteed to make you smile

The Cambridges carried out a rare engagement with Charles and Camilla in February 2020 as they visited the Defence Medical Rehabilitation Centre (DMRC) in Loughborough. The Prince of Wales always seems to make Kate giggle in public.

Charles and Kate were spotted deep in conversation as they left the annual church service together in Sandringham on Christmas Day in 2014.

Kate was captured beaming at her father-in-law as they shared a carriage in Windsor to mark Garter Day in 2014. The Order of the Garter is the senior and oldest British Order of Chivalry, founded by Edward III in 1348. Membership in the order is limited to the sovereign, the Prince of Wales, and no more than twenty-four members.

This touching snap was captured at Trooping the Colour 2018 to mark the Queen’s official birthday. Kate was spotted smiling at her father-in-law as they chatted alongside Princess Charlotte.