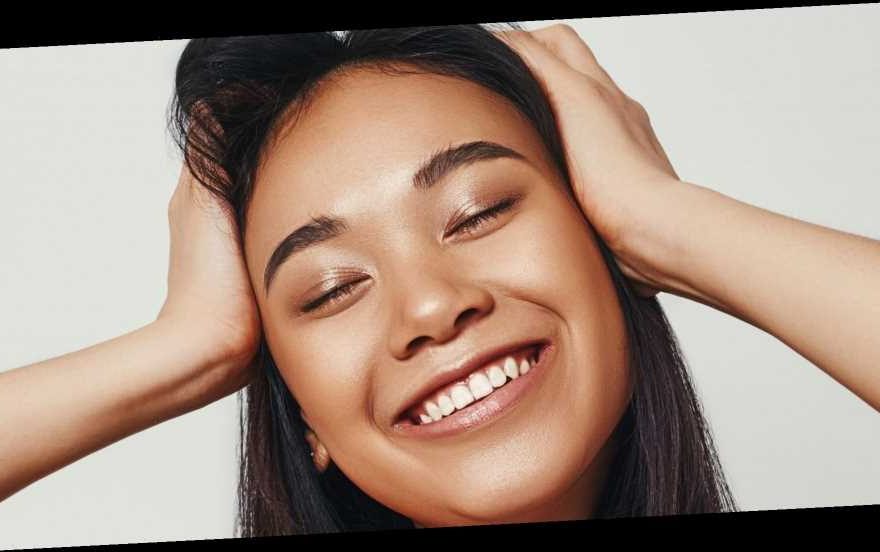 The benefits of nearly a year in quarantine are few and far between, but the ability to snack the day away is right up there with having an unlimited amount of time to love on your pets. The downside is that if, like us, you're constantly reaching for salty food, waking up with puffy eyes and emphasized wrinkles is common. But according to Amazon shoppers, a highly affordable skin tool smoothes out wrinkles within days.

The vibrating two-in-one 24k face massager from Yeamon looks uncannily like the Jillian Dempsey one that Jennifer Aniston recommended to InStyle in October 2019, with the advice that it "feels so damn good to put oil on your face and just roll." But where Aniston's favorite is a steep $195 (which, to be fair, supports a small, high-quality, woman-led brand), Yeamon's goes for $19 on Amazon. As a bonus, it comes with two interchangeable heads: One is a T-shaped arm like Dempsey's tool, where the second is two faceted balls that call to mind ReFa's $220 Carat Face roller.

The lower price doesn't sacrifice quality, according to the shoppers who've left the tool over 2,000 five-star ratings. People write that after a week of using it for 15 minutes every night while watching television (our kind of beauty ritual), all of their laugh lines are gone and their face is nearly wrinkle-free. It's so good that the shopper above claims it saved them from spending over $1,000 dollars on filler. And while their results didn't happen overnight, the increased blood flow steadily and significantly decreased fine lines. Another person writes that their skin changed after four days of using it, stress tension receding and their muscles relaxing enough to smooth major wrinkles on their forehead and around their eyes and mouth (in their words, it's "MAGIC!!!!!!!"). With daily 15-minute sessions, neck lines also "massively improve" and frown lines are no longer prominent, earning it must-buy status even from skeptics.

The effects are still greater after a month, by which time one shopper says the wrinkle-reducing power is obvious. It works by massaging out excess water retention (damn you, beloved salt), increasing lymphatic drainage to de-puff cheeks and firming skin with a cooling effect, per reviewers.

On top of the wrinkle and line-reducing benefits, people say that both heads feel straight-up amazing. One reviewer mentions that it's worked wonders on relieving pain and muscle tightness from TMJ, in addition to decreasing their skin's dullness. Migraines and eye strain also let up with the massager, according to those who use it to ease pain.

As for body use, some reviewers noticed a significant difference in their skin's elasticity and their overall leg size after massaging their legs with the ball head. It's not the first vibrating tool we've loved for stress reduction, but it may be the first that's tackled wrinkles while bringing happiness.