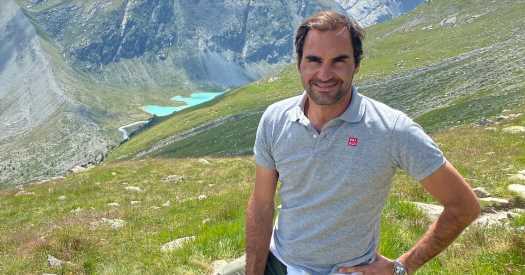 Roger Federer, the Swiss 20-time Grand Slam champion, recently became an unpaid spokesman for Switzerland Tourism. In a Zoom call from his home in Switzerland’s Graubünden canton, he explained why travelers should visit his country when it reopens.

Mr. Federer has had plenty of time to rediscover his own backyard during the pandemic, and reflect on how much his country means to him while he recovered from knee injury. (He will return to the ATP Tour in Geneva later this month.) During a 30-minute interview, he held court on his favorite hiking trails, some under-the-radar Swiss getaways and his love of Swiss chocolate, among other topics.

The following interview has been condensed and edited for clarity.

Many tennis players live in Monte Carlo for the tax benefits, but you’ve stayed in Switzerland. And now you’re promoting Swiss tourism. Why?

I know tourism here very well; I know the restaurants and hotels here very well. And I know how everyone is hurting right now. It’s a good time for me to be able to step up to the plate and help the country as we’re hopefully going to open again soon.

On Switzerland’s tourism website, you’ve outlined some of your favorite hiking trails. Tell us about a few of those and also where you like to cycle.

I’ve been told there’s something like 65,000 kilometers of cycling trails in Switzerland. Hiking and cycling are the go-to things for everyone to do in Switzerland. Some of the most spectacular hiking trails I like are by Gstaad in the Bernese Alps. It’s not so brutally up and down, it’s more of an even slope, which is great for hiking.

The same goes for Appenzell, which is a very nice place that is not so famous. It’s also where I always went hiking when I was a boy. When I was hurt in 2016, I spent a lot of time on the hiking trails in Gräubunden, where I live now. We have the Swiss National Park over there — that whole area is incredible for hiking. Ticino, the Italian-speaking part of Switzerland has some amazing places, little valleys and canyons and such.

One of my goals when I retire is that I’ll have time to explore our mountain bike trails. Mountain biking has become really big in Switzerland, because we want to make the mountain regions year-round destinations.

Can you give us a few off-the-beaten-path recommendations?

We Swiss people go to the less famous places, just like Americans would in your country. But even we Swiss like to visit the classics, like the Chapel Bridge in Lucerne, the Rhine Falls in Schaffhausen, the Rhine, the Old Town of Bern. You can base yourself in one of the cities and take nice day trips into the mountains from almost anywhere. Even in Zurich or Geneva, you drive 20, 30 minutes max and you are in the countryside. That’s the beauty of Switzerland.

It’s also interesting because we have four separate languages here in Switzerland, which makes very different cultures. I’m from Basel and I have a Basel accent, but if you drive a half-hour away from there, the accent changes and the people are a bit different, too. I think the trails in Ticino are not as well known and they are very beautiful.

I love to walk through small villages where life is still normal. Small places where people are driving tractors and there is one baker, one church. The people in these places aren’t multitasking. They go about their days in a normal way. Someone shows up and they want to know, “Hey, what brought you here?” It’s very friendly, so you can always have a chat with people.

Tell us about some of the Swiss tennis clubs where visitors can have a great meal and play some tennis.

Tennis club life in Switzerland is important. This is how I grew up. There are many scenic places where you can play tennis in Switzerland. Tennis Club Geneva, where the Geneva Open tournament is played is very beautiful. Tennis Club de Genève Eaux-Vives is also really nice. The clubs in Basel where I played growing up in the Interclub competition are quite nice.

There was a boom building tennis clubs when I was growing up, so every second village has its own club. We have to protect this tennis culture we have. The restaurants at the tennis clubs are very important. A lot of the clubs where I’ve played, they have really good chefs, really good service and very high quality. People spent a lot of their time at the clubs, so the food has to be good and it’s usually at a good price, too.

When you come back to Switzerland from abroad, what are the Swiss dishes or treats you crave? And if that includes chocolate, are you more of a milk chocolate guy or a dark chocolate guy?

I mean, chocolate, hello, you have to love chocolate if you’re Swiss. I used to be white, then I was milk, and now I even like going dark. I like it all. Then I like the Bündner Nusstorte, which is like a nut tart from the region of Graubünden. That’s beautiful. And then, of course, there’s rösti, a potato fritter dish. We have a dish called Zürcher Geschnetzeltes that’s like minced meat with a mushroom sauce, and I love to eat cordon bleu — that’s beautiful, too.

Play the role of travel agent for us. Where should we go if we have a week or two in your country?

Fly into Zurich or Geneva and go from there. In the summer, I think you would want to visit Lucerne and Interlaken and maybe visit the Jungfrau, Basel, Zurich, Bern, the capital — its inner city is also really beautiful. We also have some incredible museums in Switzerland. The Fondation Beyeler art museum is great. I grew up visiting the Tinguely Museum, which is very interesting.

In Lucerne, there is the Swiss Museum of Transport, which is still my favorite place to take my children. It’s a wonderful place where you can see old trams, trains, planes, cars, bikes, you name it.

Of course, we also have a huge festival culture in Switzerland. There’s fasnacht, a Lenten carnival in Basel, in March, and we have all these jazz and film festivals. The summer music festivals in Switzerland are incredible, actually, though I don’t think they’ll happen this year. The Montreaux Jazz Festival is maybe the most famous, but there are many smaller ones as well. There’s one in Lucerne, there’s one in the Alps as well. The atmosphere here in the summer when everyone can be outside is amazing.

Dave Seminara is the author of “Footsteps of Federer: A Fan’s Pilgrimage Across 7 Swiss Cantons in 10 Acts.”