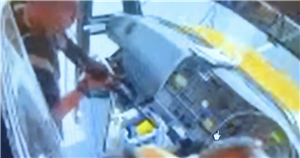 On May 6, an armed Fort Jackson trainee allegedly hijacked a school bus in Richland County, South Carolina, holding 18 children and a bus driver against their will. All the children were kept safe and the suspect, Jovan Collazo, now faces dozens of charges, including 19 counts of kidnapping.

And bus driver Kenneth Corbin is being hailed as a hero, with South Carolina Senator Mia McLeod introducing a resolution to honor and commend Corbin “for enduring courage in a life-threatening situation and offer heartfelt gratitude for his heroism,” CBS affiliate WLTX reports.

But Corbin said it wasn’t just him — the kids on the bus also helped thwart the suspect too.

“The kids started asking lots of questions to the suspect,” Sheriff Leon Lott, of Richland County, said during a news conference. “The suspect got a little frustrated.”

Corbin said the kids, all in elementary school, “pretty much had my back as much as my concerns were with them.”

In an interview with “Good Morning America” this week, Corbin said the suspect had all the kids move to the front of the bus. “That’s when especially some of my kindergarteners, they started asking questions.”

The students asked if the man was a soldier and Corbin said he “hesitantly answered, ‘Yes.'”

“They asked him, ‘Why are you doing this?’ He never did have an answer for this one,” Corbin said. “They asked, was he going to hurt them? He said ‘No.’ They asked, ‘Are you going to hurt our bus driver?’ He said, ‘No. I’m going to put you off the bus.'”

“He sensed more questions coming and I guess something clicked in his mind and he said, ‘Enough is enough already.’ And he told me to ‘stop the bus, and just get off,'” the bus driver said.

The suspect then let the children and the driver off the bus, Lott said in his news conference. The accused hijacker continued to drive for a couple more miles and eventually left the rifle on the bus and went through neighborhoods attempting to get rides and clothes, Lott said.

Corbin told GMA it was evident that the children “were precious cargo” and he had to do whatever he could to get them off the bus safely. “It seemed like they were going to do the same thing by me, and that’s why I refer to them as my heroes,” the bus driver said.

Corbin has received thank-you cards from schools across the country, and last week, law enforcement, elected officials and Richland School District Two and community leaders gathered for a ceremony to honor him, according to WLTX.

Lott said that it is apparent by the surveillance video of the incident that Lott used what he learned in training. “He just went through a checklist in his head with all of the things he needed to do, and he did them all perfectly,” Lott said.