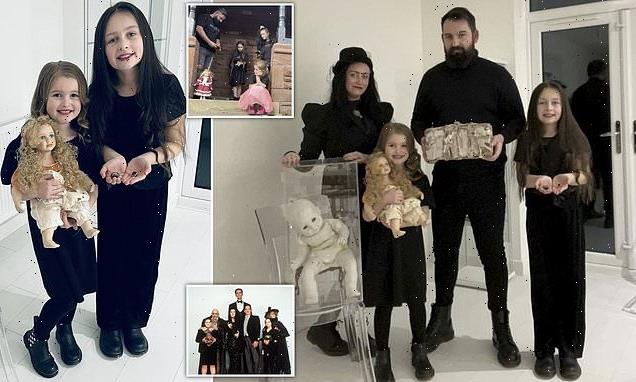 We’re creepy and we’re kooky, we’re the real Addams Family! I live in a haunted house and go ghost-hunting with the kids in our very own hearse

Meet the real life Addams family who claim their house is haunted and go ghost-hunting with their children – in a hearse.

Jon Paul Kennedy, 33, and his partner, Kymmi Jeffery, 38, from Winsford, Cheshire, have heard a little girl crying and smelled rotten egg in their home since they moved to their new house in September 2022.

The couple are putting up cameras to capture the spooky ongoings and say their daughters – Snow, 10, and Pebble, six – are just as intrigued.

The family, who travel in a hearse called Morticia, hope to set up a museum for their artefacts – two dolls, Mimi and Esther, pieces of jewellery and a dybbuk box. 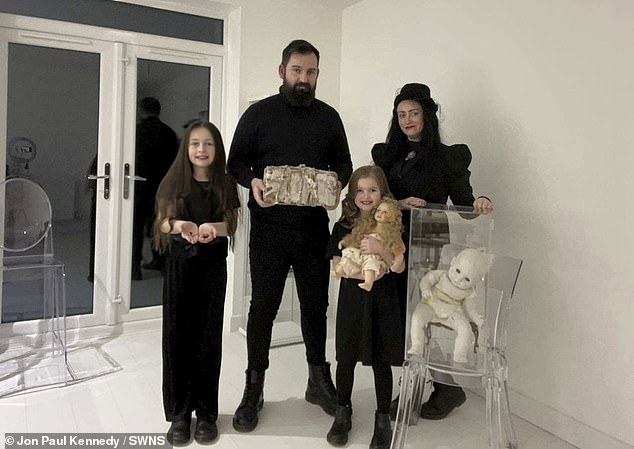 Jon Paul Kennedy, 33, and his partner, Kymmi Jeffery, 38, from Winsford, Cheshire, and their two daughters, Snow, 10, and Pebble, six, are like a real life Addams Family

Jon, a teacher,  said: ‘We thought we had a gas leak because it was smelling like rotten egg.

‘We called an engineer out and he couldn’t find a leak. Suddenly the smell just vanished. Sulfur smells can be associated with demons.’

Kymmi, a therapist, said: ‘The other night I woke up at 3am and heard a girl crying.

‘I checked on Snow and Pebble but they were fast asleep. We’re going to buy cameras to try and capture anything.’ 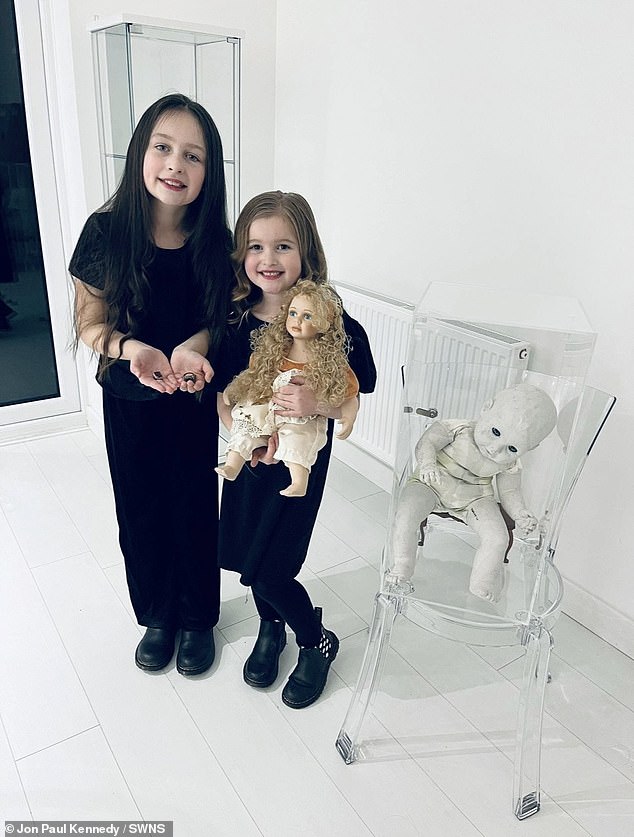 Snow and Pebble, pictured with the family’s occult dolls, love to look for the ghosts they believe haunt their house Jon and Kymmi admitted they have been compared to the fictitious Addams Family, made famous by the 1993 movie of the same name, which starred Anjelica Huston, Raul Julia and Christina Ricci,

The couple started their ghost-hunting business in August 2022 after going on a tour for Kymmi’s birthday.

‘Kymmi was very sceptical about it all when she first met me, ‘ Jon said.

‘I bought her a ticket to a haunted house for her birthday and we picked up a pink spirit ghost on camera.’

The family visit sites together and claim their daughter, Snow, can see ghosts and demons.

‘She saw these really long fingers on a ghost hunt,’ Jon said, adding: ‘She keeps picking up stuff in the house. 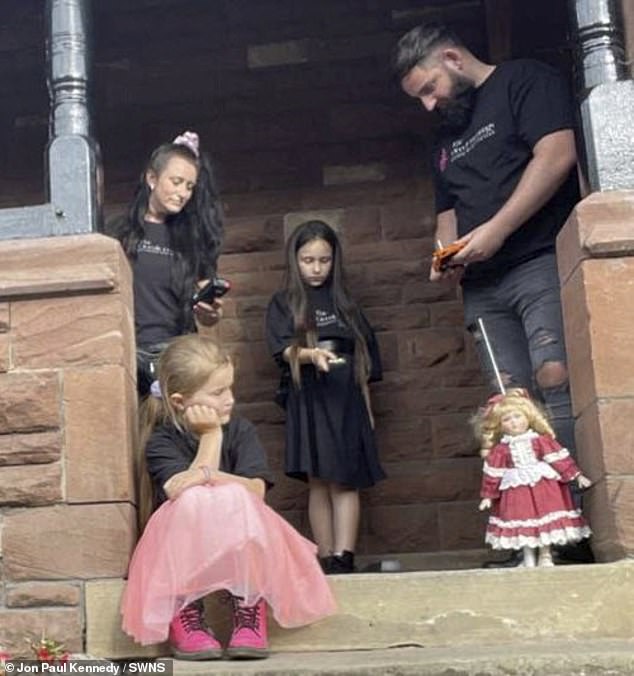 The parents and children with Mimi, an occult doll they believe is haunted by not one but two spirits

‘The girls loved being involved with experiments on our different artefacts..’

Kymmi added: ‘Pebble finds it hilarious. She put out all her Barbies to see if they would move.

‘They’d moved when she woke up and she was adamant it wasn’t her.’

The couple bought each other ‘haunted’ gifts for Christmas – with Jon buying Kymmi a demonic ring.

‘It turned out to be a sexual demon that prays on women,’ Kymmi said. ‘I was a bit fuming.’

Kymmi spent £250 on a doll for Jon called Mimi. 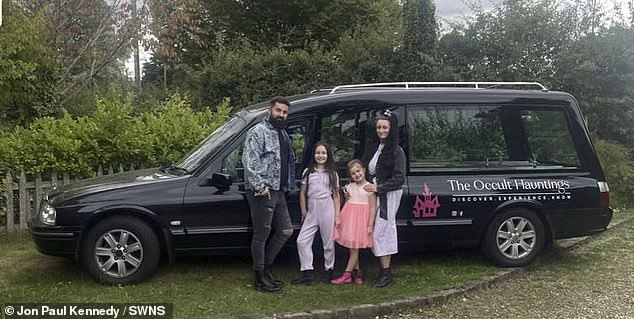 The family have acquired their own hearse, which they have called Morticia, in a nod to the mother of the Addams Family 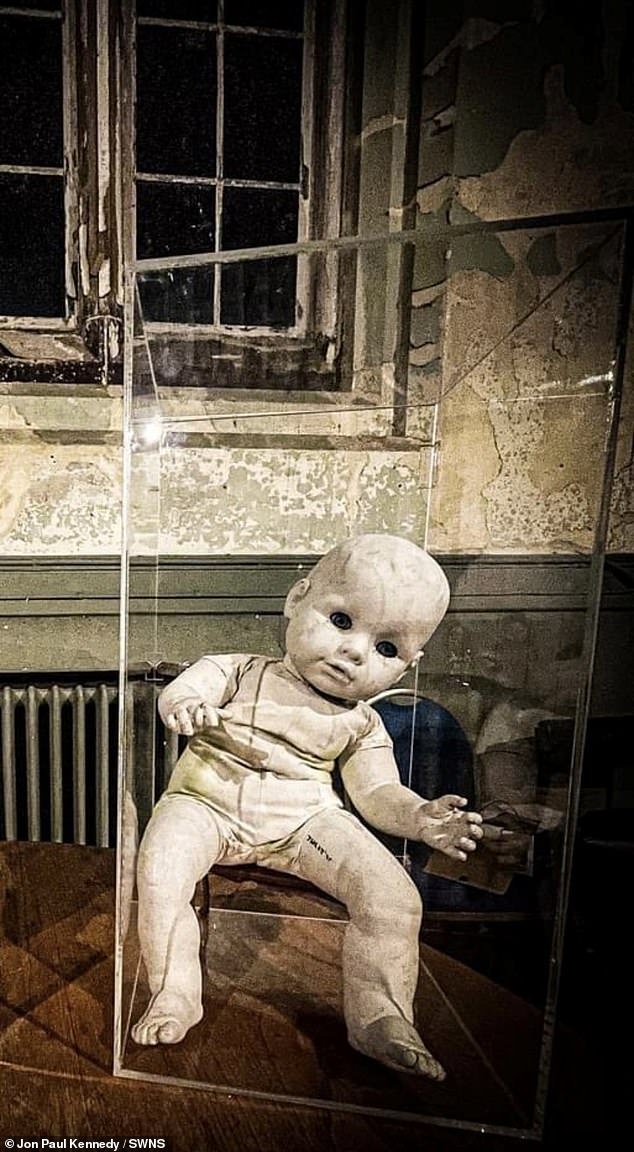 The couple explained that Esther, pictured, is a demonic doll that they keep under lock and key 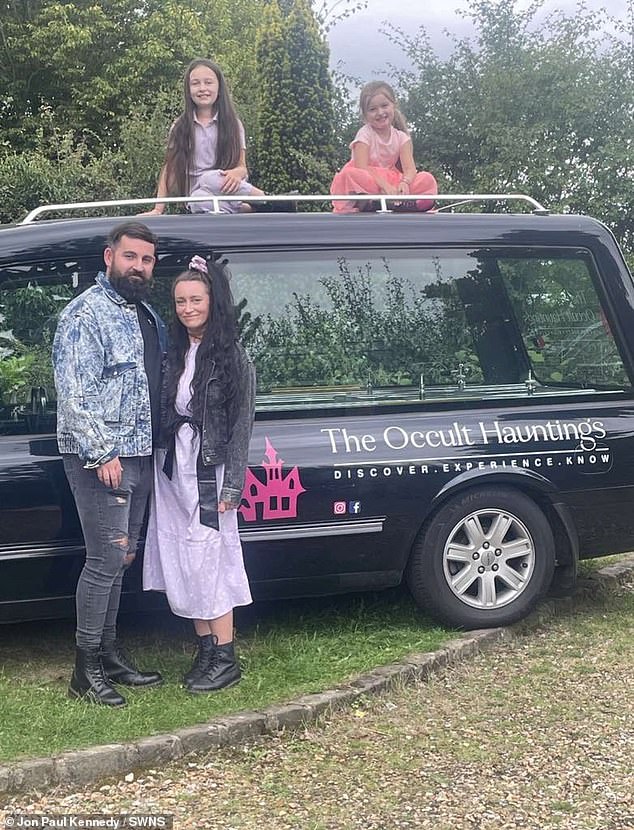 Jon and Kymmi stand proudly in front of their hearse, with their two daughters. They hope to open an occult museum to showcase the artefacts they have acquired over the years 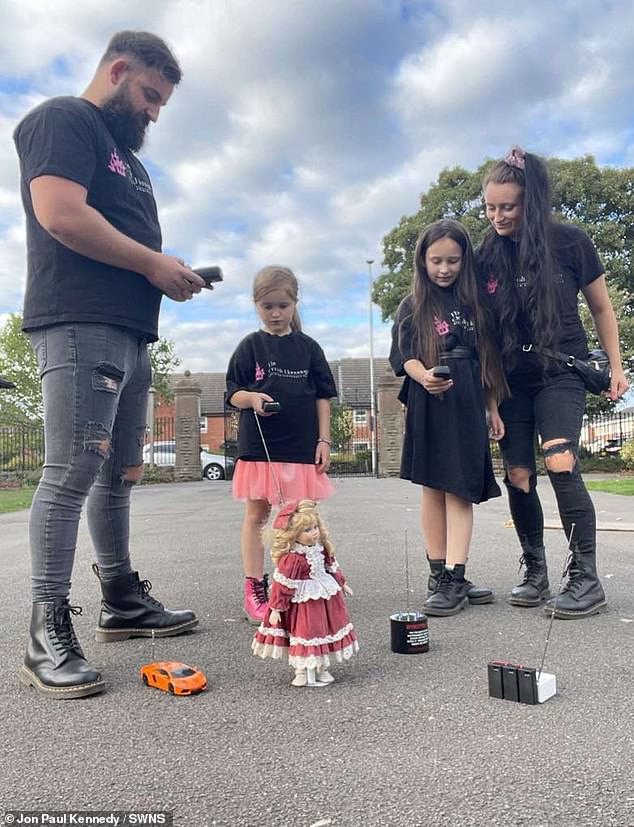 The family are hoping to add to their artefacts in the hope of someday opening up a museum.

‘We have a dybbuk box which is bound in rope and sealed in wax,’ Kymmi said. ‘An evil entity is trapped in there.’

The family are contacted by their community to investigate hauntings – and take Pebble and Snow along with them.

‘Were known as the haunted family,’ Kymmi said. We get named the Addams family or the Warrens.

‘We’ve had builders stop and stare out our hearse on the driveway and take pictures of it.

‘It was great to fit the Christmas tree in. We’re hoping to find more evidence from our investigations.’ 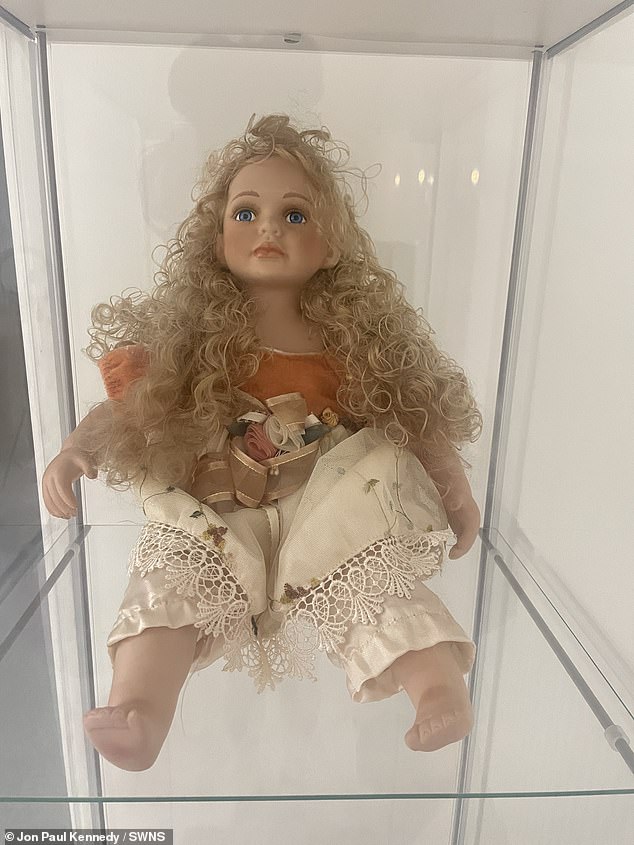 Mimi, the doll who the family believe is attached to two spirits and who stays in the house with them Kimmy believes her ruby pendant necklace, pictured left on an illustrated bible, is haunted by the spirit of a woman 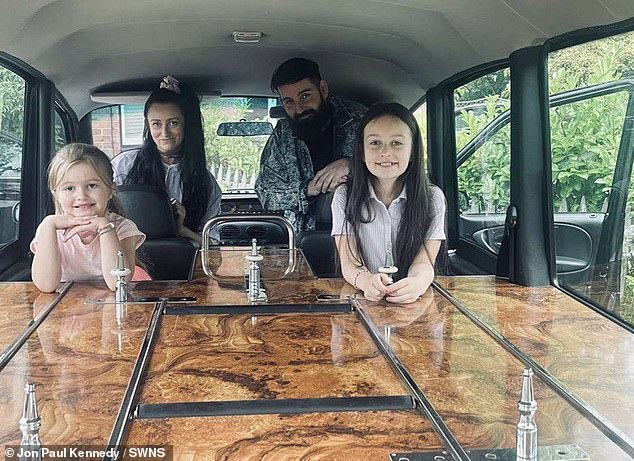 Pebble, left, and Snow in their parents’ hearse, which they gladly use to go on ghost-hunting missions 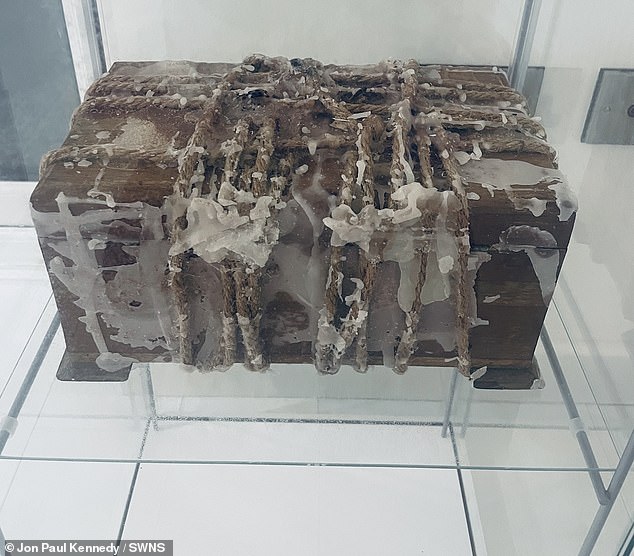 The family also own a Dybbuk box, which according to Jewish mythology is inhabited by the malevolent spirit of a dead person