State governments and health experts have insisted the federal government spell out clearly how the vaccine rollout relates to the reopening of international borders as Prime Minister Scott Morrison on Sunday urged caution in the face of global outbreaks.

Acting Premier James Merlino said Australia could begin winding back restrictions once a greater proportion of the population had been vaccinated, agreeing with Chief Health Officer Brett Sutton that we could no longer act as “Fortress Australia”. 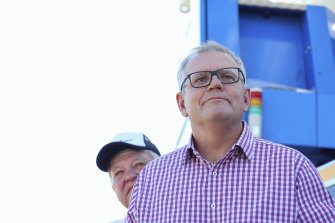 Prime Minister Scott Morrison in Gladstone, Queensland on Sunday where he urged for caution on reopening the nation’s border.Credit:Dominic Lorrimer

“Once we can get to a point where the vaccine has been successfully rolled out to a large extent, then we can start making further changes,” Mr Merlino said. “But it’s always dependent on public health advice, the success of the Commonwealth’s vaccine program, and having an alternative to hotel quarantine.”

NSW Treasurer Dominic Perrottet told The Age and The Sydney Morning Herald that linking inoculation targets to the timing of borders reopening was crucial to reassuring the community and business that Australia would not be closed indefinitely.

However, the Prime Minister said on Sunday the country could not use vaccinations alone as a reason to reopen.

“Even in that circumstance, you’re still talking about millions of Australians who wouldn’t have been vaccinated because a) they’re children, or b) they’ve chosen not to be,” Mr Morrison said.

“And you’re also making assumptions about what the rest of the world looks like with COVID at the end of this year, the introduction of new variants and strains.”

Defending the decision to reject dozens of passengers from India on the first repatriation flight on Saturday, Mr Morrison said “you’ve got to be cautious”, adding that “it just doesn’t make sense” to put COVID-positive Australians on a flight home.

A number of experts said Australia now needed a clearly spelled-out plan for what happens at the borders when the vaccination process had been largely complete. Richard Holden, an economist at the University of NSW, said it was time the government made its reopening plan clear.

“These debates about, ‘we cannot be a hermit nation’ … or ‘we cannot take any risks’. They are kind of vacuous fortune-cookie-wisdom level statements,” Mr Holden said. “The whole question is: What is the plan? What do we need to do?” 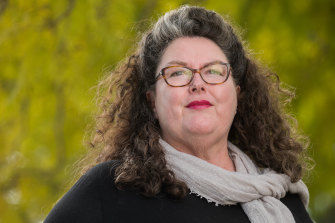 Professor Catherine Bennett, Deakin University’s chair of epidemiology, warned Australia would have a “hard time catching up” once the rest of the world had already learnt to live with the virus.

Last week Nick Coatsworth, Australia’s former deputy chief medical officer, said the “false idol” of COVID-19 eradication could not be maintained indefinitely and the nation must become “prepared and comfortable” for the virus to spread.

“At a point in the future when a significant majority of our community is vaccinated, there will be pressure to open our borders. We must not resist that. In fact, when the time is right, we should be leading the calls for it,” Dr Coatsworth said.

In leaked recordings of a private seminar of healthcare workers in April, Professor Sutton revealed he also believes the country will need to abandon its “Fortress Australia” approach to COVID-19 and “make a call on letting it run” once vaccinations are widely offered.

Mr Perrottet, who has been critical of the federal government’s timeframe after it was assumed in last week’s federal budget that international borders will stay shut until mid next year, said clear goals needed to be set and he would “continue to advocate” for a timetable.

“A vaccine target that we can work towards will give business and community confidence that we will not be closed off to the world indefinitely,” Mr Perrottet said. He warned his state’s budget was $1.5 billion worse of every month that the borders were closed.

He also said the Commonwealth was working closely with Qantas on a testing regime for people seeking to leave India, after more than 70 travellers were refused permission to board after testing positive to COVID-19 or being a close contact.

The first repatriation flight from India landed in Darwin on Saturday with just 80 of its estimated 150 scheduled passengers on board. Forty-two passengers tested positive during their mandatory three-day hotel stay in Delhi, and another 31 of their close contacts were also barred from flying.

About 9500 Australians have registered with the Department of Foreign Affairs and Trade as wanting to return home from India, and 950 of those people, including 173 children, are listed as vulnerable. Flights were halted last month as the number of cases in quarantine rose dramatically.

Victoria reported no new local cases of COVID-19 on Sunday, and four new cases among returned travellers in hotel quarantine, bringing the total to 22.