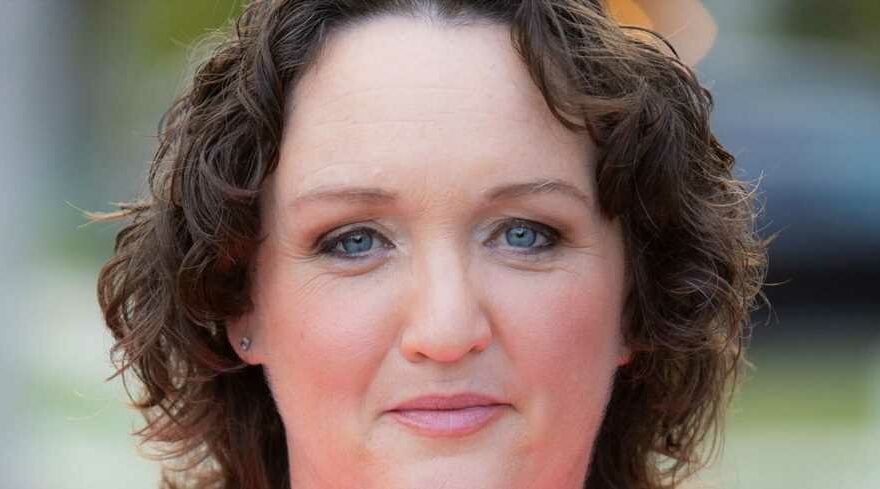 The word "ambition" can be a tricky mistress. Some women have no qualms about they're driven to achieve, while others struggle under a gendered idea that it's unbecoming in some way. But ambition is what we're all about — it's at the heart of every Badass Woman profile we write and the whole point of our Ladies First podcast, which is why we dedicated a special episode to the concept of ambition and the women who embody it most fully.

Representative Katie Porter comes to mind immediately when we think of the word ambition. And after looking back at her episode of Ladies First with Laura Brown, it's clear she doesn't shy away from that description in the least. She told InStyle's editor in chief Laura Brown exactly what it is she's ambitious for.

"So I have a real mission here. My goal is to get the American people to trust Congress," she said. "Not to necessarily agree with everything we do. That just seems like a fool's errand in a democracy."

Which is where her whiteboard comes into play. She's ambitious to get others to really listen, and if she has to create a visual aid, so be it.

"I'm really trying to think about how do I show people what's at stake here, what I've done to listen to them, what I've done to learn about the problem and possible solutions and to explain why I reached the conclusion that I have," she explains. "Given that Congress has had this popularity problem for like 40 years, I'm not sure how quick of a fix this is going to be, but I'm really hellbent on doing it."

Awkwafina, Katie Porter, and Uzo Aduba Are Ambitious As Hell — We Tell You What They’re Aiming For: Episode 42: October 5, 2021 This podcast may contain cursing that would not be appropriate for listeners under 14. Discretion is advised.

Awkwafina told Brown that she didn't consider herself ambitious at all until she found her way to her passion.

The Shang-Chi and the Legend of the Ten Rings actress continued saying that she has battled with imposter syndrome while launching her career. "This is the first year where I'm really starting to confront that in a real way," she said. "I know that I work hard. That's the only thing that I do know. I don't know for sure that I'm good at what I do, but I know for sure that I work hard, really hard."

Allow us to add that, yes, of course she's good at what she does. And as the first Asian-American woman to win a Golden Globe Award for best actress, she now has the trophy to prove it.

Another stellar performer who's also exceptionally good what she does? You may know her as "Crazy Eyes" from the hit show Orange is the New Black, Uzo Aduba told Brown that she doesn't want women to be afraid of the word ambition.

RELATED: Uzo Aduba Has Cried on the New York Subway

"I think a lot of times women in particular have been made to feel like they should shy away from that word, like it was dirty and not for them," she explained. "And that [if] they want to go for what it is that they dreamt of, [it] was a bad thing. And it's not."

And the Emmy-winner is a damn good role model for other ambitious women because she sure has a lot of things that she's not afraid to work for.

If you need a dose of motivation, queue up the rest of this episode for more.

Listen to the full episode and subscribe on Apple, PlayerFM, Spotify, Stitcher, or wherever you find your favorite podcasts. And tune in weekly to Ladies First with Laura Brown hosted by InStyle's editor in chief Laura Brown, who speaks to guests like Michelle Pfeiffer, Emily Ratajkowski, Cynthia Erivo, Naomi Watts, La La Anthony, Ellen Pompeo, Rep. Katie Porter, and more to discuss current events, politics, some fashion, and, most importantly, the major firsts in their lives.