The quarantine mega-hub on the outskirts of Toowoomba, which would be built and paid for by local construction firm Wagners, needs federal government approval to go ahead. 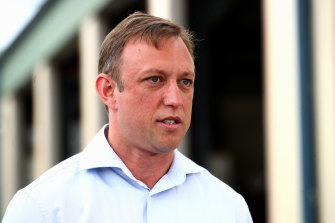 Deputy Premier Steven Miles likened Scott Morrison to a school bully “telling us we have to give our lunch money to NSW”.Credit:Jono Searle/Getty Images

Applying pressure on Mr Morrison to move ahead on the pitch, Deputy Premier Steven Miles said the Queensland government would refuse to pay a $30 million quarantine bill issued by NSW until the federal government allowed repatriation flights to land at Toowoomba’s Wellcamp Airport.

Mr Miles said his state was “stepping up where the Commonwealth have failed” by proposing the national quarantine facility in southern Queensland.

“And yet, the Commonwealth continues to hold New South Wales up as some sort of supposed gold standard,” he told Parliament on Wednesday.

“Who could forget Prime Minister Morrison’s crocodile tears over NSW residents’ inability to attend funerals or come to our hospitals despite NSW owing us $20 million for hospital treatments already.

“Now, Mr Speaker, I am outraged to advise the house that the Prime Minister has told NSW they can bill Queensland for their hotel quarantine.”

Mr Miles tabled the invoice from the NSW government, seeking more than $30 million for hotel quarantine stays between March and September last year.

“NSW quarantined 7112 arrivals during the above period who provided a residence address in your state,” the invoice reads.

“A further 4991 arrivals did not have an Australian address recorded and have been allocated proportionally across states and territories and are included in your cost allocation.”

Mr Miles said the state would not pay the bill, which was due on March 19.

“Scott Morrison is like a school bully telling us we have to give our lunch money to NSW,” he said.

“We will not be paying that bill, not while the Commonwealth refuses to endorse our plan for a national quarantine centre.”

“The national quarantine centre proposed for the Wellcamp Airport would allow us to accommodate up to 1000 returning Australians currently stranded overseas,” he said.