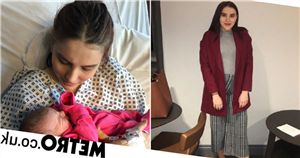 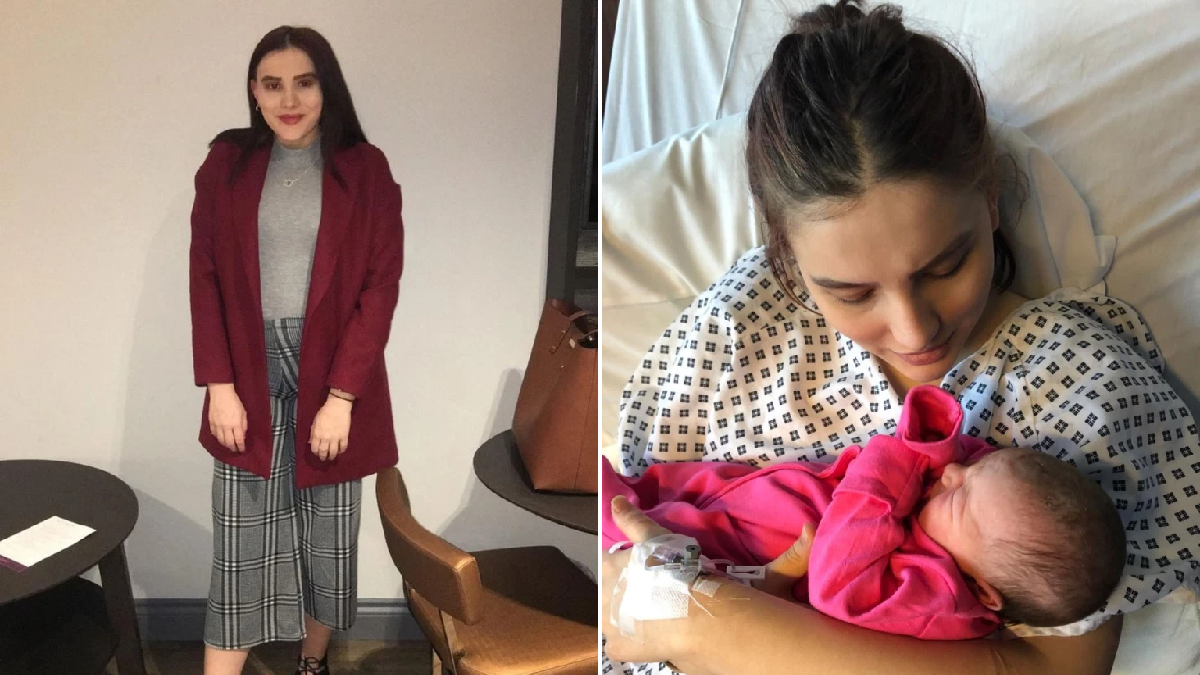 When Jodi-Marie Ash, 20, began having tummy pains while at work as a waitress, she assumed she had just eaten something that disagreed with her.

But soon, those pains became excruciating. By the end of her eight-hour shift, she was rushed to the hospital, where she not only discovered she was pregnant, but that she was already in labour.

It was quite the shock, as Jodi-Marie had no clue she was pregnant, having been without a bump for months.

The young mum says she was on the contraceptive pill throughout her pregnancy, but admits she sometimes forgot to take it.

A lack of symptoms and a bump meant she had no reason to think she was carrying a child.

And when she did a pregnancy test – purely as moral support for a friend who’d been scared to do her own – it came back negative.

Jodi even went clubbing for her birthday and climbed the 02 Arena while unknowingly carrying a baby.

Now her daughter Skyla Grimsey is one, Jodi claims she takes a pregnancy test every three months in a bid to ensure she is not caught by surprise in the same way again.

Jodi-Marie, of Basildon, Essex, said: ‘I went to hospital with a stomach ache and came out with a baby.

‘I thought the pain was appendicitis, stomach ache or I’d eaten something wrong – I was thinking of all these sorts of things but didn’t think for a second that I was in labour.

‘I didn’t have any symptoms – I was on my period the whole time and wasn’t sick or nauseous at all.

‘I took a pregnancy test [Dec 2018] and it came back negative. I only did one because my friend thought she was pregnant and I said I’d do one with her to not make it as scary for her – it wasn’t because I thought I was pregnant.

‘There was no form of a bump as such – after I ate I got more bloated than usual but there wasn’t anything to be majorly concerned about to the point where I thought I could be pregnant.’

The discomfort grew and by the time she was picked up that evening she couldn’t sit still as she was in so much pain.

When she arrived home Jodi-Marie tried painkillers and a Tens machine, but by 11:30pm she was rushed to the hospital where they arrived around midnight.

Jodi-Marie said: ‘The doctor said to me “oh, we’re going to do a pregnancy test on you” and I was like “right ok” and it came back positive.

‘After he said I was pregnant I said straight away ‘why am I in so much pain though?’ Because being pregnant doesn’t mean you should be in that much pain.

‘He said that they had to send me for some more tests and I was on the wheelchair going to the delivery room not knowing I was going there and the porter told me that’s where I was going and I was about to give birth.

‘I think I was shocked and surprised more than anything – it was all a bit surreal.

‘The whole night was a blur and did go really quickly but at the time I just remember thinking that I just had to get the baby out.’

After under an hour of active labour, her baby girl Skyla was born at 1:57am, weighing 6lbs 12oz.

The young mum said that both her family and Skyla’s father’s family were on hand throughout the whole process and helped to provide supplies for their newborn baby at such short notice.

Jodi-Marie said: ‘Everyone was really supportive so we didn’t have to run around and do much to be honest.

‘I rang my mum and dad and just put it on Facebook for everyone else to see – I didn’t want to have to ring up everyone and be like “this has happened”.

“My friends were just as shocked as I was – my colleagues said “you were pregnant? You would never have known”.

‘What they say about a mother’s instinct is true because I sort of just knew I had to do it.

‘At the time I was like “wow” as anyone would be in their right mind but after all of that died down – I wouldn’t have it any other way.’

Do you have a story to share? We want to hear from you.

Get in touch: [email protected]