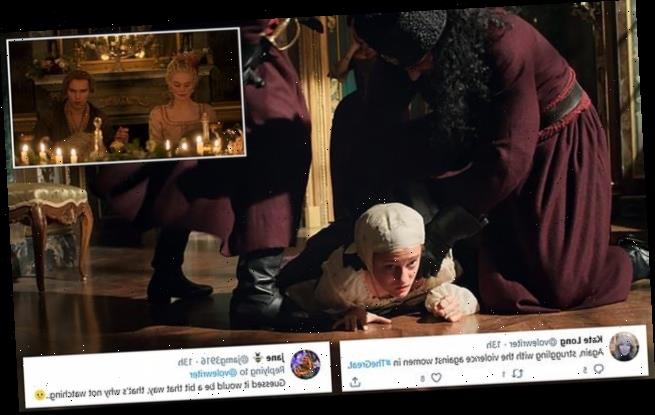 Viewers of a TV drama about the life of Russian empress Catherine the Great were left shocked by the violence against women shown in the programme last night.

The hit series The Great is currently airing on Channel 4 and details the marriage between Catherine, who ruled Russia between 1762 and 1796, and her second cousin, Peter III, whom she overthrew in a coup d’etat.

During last night’s episode, Peter, played by Nicholas Hoult, joked about punching Catherine, portrayed by Elle Fanning, as well as having her murdered, saying: ‘I could kill her and start again. Why is no one excited by this idea?’

Meanwhile Catherine’s maid Muriel was seen being beaten thrown to the floor and whipped with sticks during another scene, with one viewer commenting: ‘Again, struggling with the violence against women in #TheGreat.’ 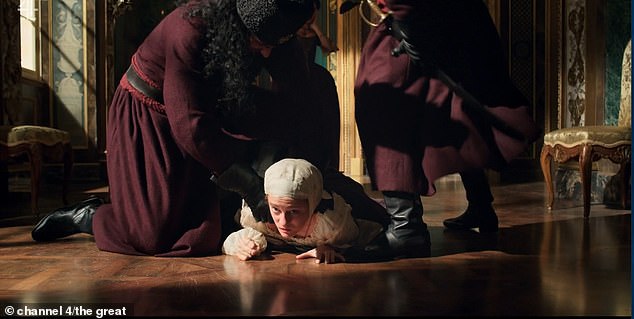 During the show, Peter was seen recalling how he punched Catherine, before being told by his mother: ‘Some enjoy that.’

Later, he sat down for a meal with Catherine and joked about abusing her, saying: ‘You might remember a week ago I shot your bear and punched you. Perhaps it has cast a wall between us.

‘I think I was angry because nobody has ever not liked me. It’s a new day, a time to put things between us. Teething problems I think.’

He asked Catherine to ‘forget’ it, saying: ‘I think you have come in here with a very romantic idea of me, marriage and life. 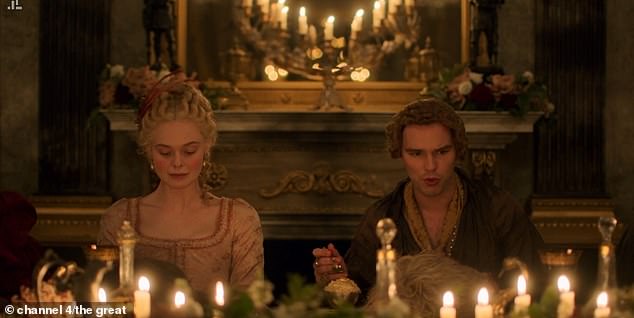 During the programme, Nicholas Hoult’s character Peter III repeatedly joked about punching Catherine the Great in the face and having her killed

‘A little naive I guess. Not a criticism, it’s actually a lovely attitude.’

The couple went on to joke about murdering one another, with Peter saying: ‘I never imagined myself as the man who punches his wife.’

After he promised to stop beating her, Catherine called Peter ‘marvelous’, especially since he had ‘given me a bear and ceased punching me. What woman would not be happy?’

But later in the show, the emperor announced plans  to murder his wife, saying he thought a ‘suitable carriage accident followed by a period of mourning’ would allow him to remarry. 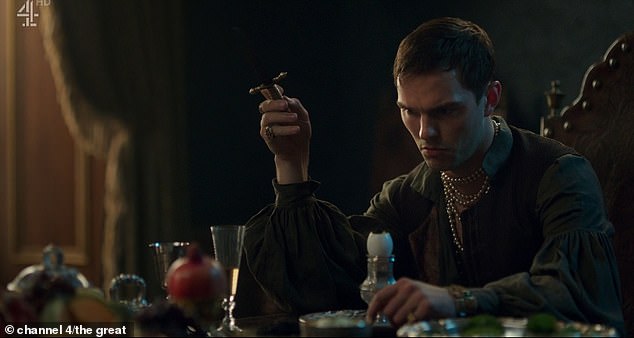 He said: ‘Mother lit up when father walked into a room. I could kill her and start again. Why is no one excited by this idea?’

And in another scene, Catherine’s maid was seen being whipped with sticks, leaving her covered with bloody welts across her back.

Many of those watching were left stunned by the show, with one writing they were ‘struggling’ with the violence against women on the programme.

One added: ‘Guessed it would be a bit that way, that’s why not watching.’

Another wrote: ‘Me too.’

But others said the jokes about violence and rape weren’t turning them off the hit drama.

One wrote: ‘I massively underestimated how much I would enjoy The Great. I mostly chose to watch for the cast and expected to cringe at the gross humour, but so far it has actually been fantastic.

‘Still not for the faint of heart but so good. I was right about the cast though; they’re outstanding.’