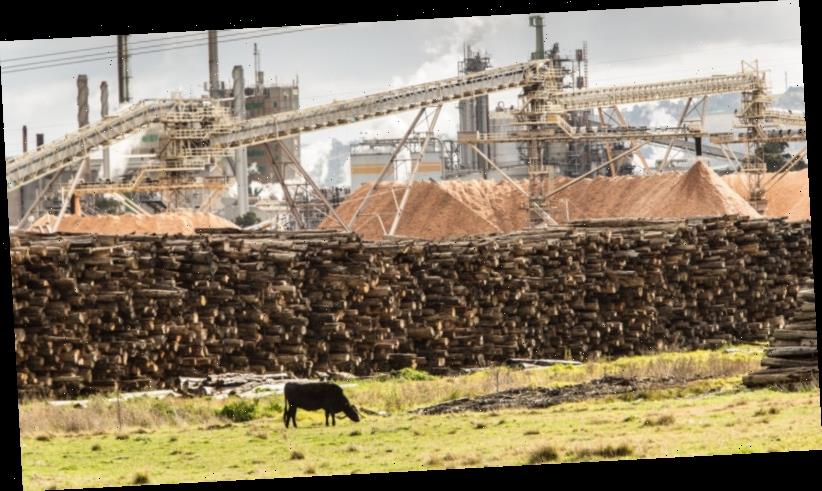 The Latrobe Valley’s largest private employer is being asked to reassure workers of its long-term plans amid fears the Victorian government’s decision to end native timber logging will leave a major supply shortfall.

The future of almost 850 jobs at the Maryvale paper mill – the largest of its kind in Australia – are at risk following the announcement that EnergyAustralia plans to shut its coal-fired power station at nearby Yallourn four years earlier than scheduled. 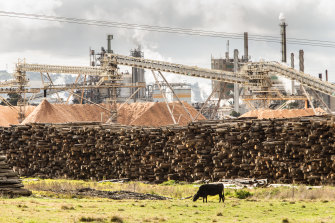 A shortfall in timber supply has the potential to threaten the future of the Opal plant near Morwell.Credit:Jason South

The traditionally blue collar region in eastern Victoria has been hard-hit in recent years with almost 1000 jobs lost following the sudden closures of Hazelwood power station and the Carter Holt Harvey timber mill.

The 82-year-old mill, was purchased by Japanese company Nippon Paper in 2009 and produces more than 600,000 tonnes of copy paper and board annually under the Opal brand name using raw materials from native forests and recycled paper sources. About two-thirds of its supply comes from private pine and eucalypt plantations.

In late 2019 the Andrews government announced a decade-long phasing out of native forest logging in Victoria by 2030. The government proposed a transition to plantations and as a “sweetener” it would invest $110 million to grow new plantations.

Victorian governments have supplied Maryvale since 1961 and are committed to supplying pulpwood, a by-product of harvesting for saw logs, until 2030 under a legislated agreement.

But industry fears continued delays in establishing plantations and the loss of several thousand hectares during bushfires will lead to a dramatic short-fall in the amount of timber required long before the native ban starts in 2030.

Federal Gippsland MP Darren Chester said he had written to the owner of the mill to seek assurances on behalf of hundreds of workers whose jobs are threatened by cuts to timber supply.

Mr Chester told Opal management he feared the company’s considerable investment in new technology and development of innovative products would be undermined if the Andrews government proceeded with its current policy.

“Notwithstanding any commercial-in-confidence matters, I am seeking your guidance as to what assurances the Victorian government has provided to your company in relation to supply of raw materials to allow full production to continue at Maryvale,” he wrote.

“I have seen no evidence that the Victorian government has any prospect of securing the volumes of wood required to undertake the proposed transition and workers at Maryvale will risk losing their jobs.”

The company said at the time the transition would be “enormously challenging” but that it would help secure its future and address industry supply uncertainty.

A company spokesman said Nippon Paper had invested $1.72 billion to create Opal – one of Australasia’s largest fibre packaging businesses – and the Maryvale mill had a key role to play.

“Opal is committed to securing our Maryvale operation beyond 2050 through expanded access to plantation resources,” he said. “We will continue to work collaboratively with the Victorian Government to enable the successful transition of our operations to plantation-based supply.”

Around 500 hectares, equating to approximately 500,000 seedlings of blue gum, has been planted on Crown Land under the VicForests plantation program.

CFMEU manufacturing national secretary Michael O’Connor, who also plans to write to the mill’s owners, said it was clear the deadline to transition out of native forests was “unachievable” without leaving workers and communities on the scrap heap.

Mr O’Connor said the Victorian government’s plan had provided no opportunity for the solid hardwood industry to transition and put jobs at “serious risk”.

“There is no way that any of these plantations will be ready for use by the industry in 2030 for pulping and certainly not for solid wood product manufacturing,” Mr O’Connor said. “Pretending this scheme will provide a future for workers and timber communities is nothing more than a cruel hoax.” 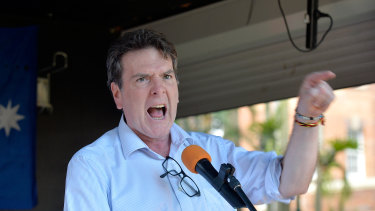 Victorian Agriculture Minister Mary-Anne Thomas said the government had been clear that plantation trees planted now will not be ready by 2030 and that they will not be replacing native forests tree-for-tree.

“Work is underway through the Crown Land planting program and the Gippsland Plantation Investment program to help Opal’s transition to wholly-plantation supply,” she said.