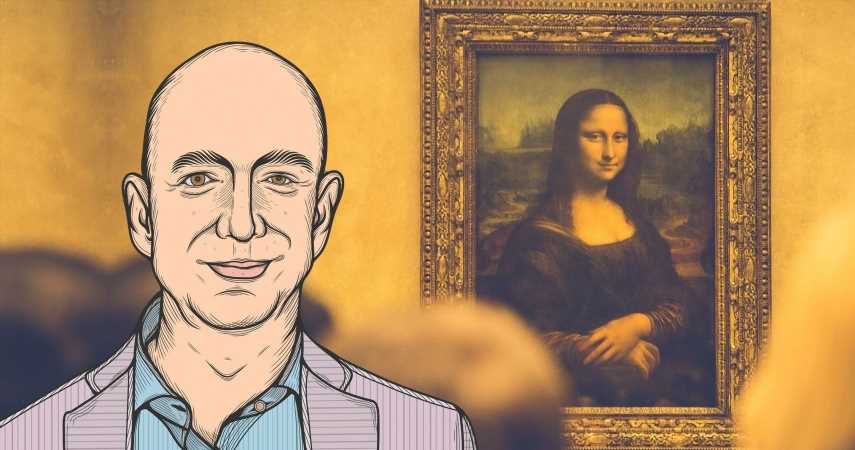 There is a very real petition on the very real site, Change.org, calling for billionaire Jeff Bezos to buy the Mona Lisa…and then eat it.

The bizarre cause has 5,773 people behind it, and climbing, as of this posting. Those people all want want to see the Amazon founder not only purchase the expensive Leonardo da Vinci iconic artwork buy then devour it like am oil painting-eating monster. Few things encompass the social media age of internet technology like this.

Posted a year ago, the insane request is getting momentum online today.  After all, how can you argue with a sales pitch like this?

“Nobody has eaten the Mona Lisa and we feel Jeff Bezos needs to take a stand and make this happen.”

Currently, The Mona Lisa remains uneaten and displayed at the Louvre Museum in Paris, owned by the French state. While the petition is real, the claim is so bizarre that even the signers can’t help but have fun with the concept. Comments include:

“Jeff Bezos needs to eat the Mona Lisa to save the world.”

The absurdist nature of it all harkens back to The Eric Andre Show or a Monty Python rerun. Further, the visual image of Jeff, with an Amazon bib around his neck, is enough to make even the most serious web user shrug and sign up.

Bezos may be too busy to enjoy a Da Vinci Sandwich as he prepares to hopefully be on the first space flight for his rocket to the stars, Blue Origin. With a flight scheduled for July 20, it makes sense that he might need a pre-flight snack before boarding the vessel.

It is never suggested that anyone tries to eat a painting. Famously, Vincent Van Gogh, the troubled genius known for cutting off his own ear, apparently tried to poison himself by drinking his own paint and turpentine. Whether that’s the goal of these petititoners remains to be seen.

So, where to do you stand? Do you want to stare at a beautiful painting or stare at a bald billionaire attempting to fit it – frame and all – into his mouth and down his gullet? In today’s day and age, it’s hard to pick a side. If you do, however, want the latter, there’s still time to add your name here.

READ NEXT: Battle of the Billionaires: The Clash Between Elon Musk & Jeff Bezos Over NASA