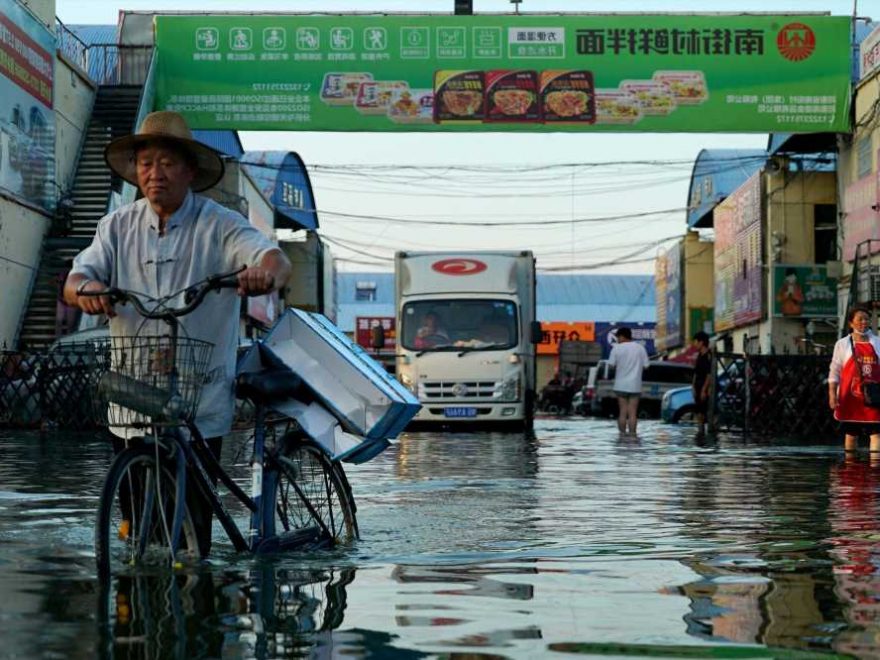 As the world staggers through another summer of extreme weather, experts are noticing something different: 2021′s onslaught is hitting harder and in places that have been spared global warming’s wrath in the past.

Wealthy countries such as the United States, Canada, Germany and Belgium are joining poorer and more vulnerable nations on a growing list of extreme weather events that scientists say have some connection to human-caused climate change.

“It is not only a poor country problem, it’s now very obviously a rich country problem,” said Debby Guha-Sapir, founder of the international disaster database at the Centre for Research on the Epidemiology of Disasters at Catholic University of Louvain in Belgium. “They (the rich) are getting whacked.”

Killer floods hit China, but hundreds of people also drowned in parts of Germany and Belgium not used to being inundated. Canada and the Pacific Northwest of the U.S. had what climate scientist Zeke Hausfather called “scary” heat that soared well past triple digits in Fahrenheit and into the high 40s in Celsius, shattering records and accompanied by unusual wildfires. Now southern Europe is seeing unprecedented heat and fire.

And peak Atlantic hurricane and U.S. wildfire seasons are only just starting.

When what would become Hurricane Elsa formed on July 1, it broke last year’s record for the earliest fifth named Atlantic storm. Colorado State University has already increased its forecast for the number of named Atlantic storms — and the National Oceanic and Atmospheric Administration Wednesday said it was expecting one or two named storms more than it predicted in May.

For fire season, the U.S. West is the driest it has been since 1580, based on soil moisture readings and tree ring records, setting the stage for worsening fires if something ignites them, said UCLA climate and fire scientist Park Williams.

What happens with U.S. hurricane and fire seasons drives the end-of-year statistics for total damage costs of weather disasters, said Ernst Rauch, chief climate and geo scientist for insurance giant Munich Re. But so far this year, he said, wealthier regions have seen the biggest economic losses.

But when poorer countries are hit, they are less prepared and their people can’t use air conditioning or leave so there’s more harm, said Hausfather, climate director of the Breakthrough Institute. While hundreds of people died in the Pacific Northwest heat wave, he said the number would have been much higher in poor areas.

Madagascar, an island nation off East Africa, is in the middle of back-to-back droughts that the United Nations warns are pushing 400,000 people toward starvation.

Though it is too early to say the summer of 2021 will again break records for climate disasters, “We’re certainly starting to see climate change push extreme events into new territories where they haven’t been seen before,” Hausfather said.

The number of weather, water and climate disasters so far this year is only slightly higher than the average of recent years, said disaster researcher Guha-Sapir. Her group’s database, which she said still is missing quite a few events, shows 208 such disasters worldwide through July — about 11% more than the last decade’s average, but a bit less than last year.

Last year, the record-shattering heat that came out of nowhere was in Siberia, where few people live, but this year it struck Portland, Oregon, and British Columbia, which gets more Western media attention, Hausfather said.

What’s happening is “partly an increase in the statistics of these extreme events, but also just that the steady drumbeat, the pile on year-on-year … takes its cumulative toll on all of us who are reading these headlines,” said Georgia Tech climate scientist Kim Cobb.

“This pattern of recent Northern Hemisphere summers has been really quite stark,” said University of Exeter climate scientist Peter Stott.

While the overall temperature rise is “playing out exactly as we said 20 years ago, … what we are seeing in terms of the heat waves and the floods is more extreme than we predicted back then,” Stott said.

Climate scientists say there is little doubt climate change from the burning of coal, oil and natural gas is driving extreme events.

A new study using satellite images of global flooding since 2000, shows that flooding worldwide hits 10 times as many people as previously thought. Wednesday’s study in the journal Nature finds that from 2000 to 2018 between 255 and 290 million people were directly affected by floods — which lead author Beth Tellman of the University of Arizona says is based on 913 floods with thousands more not counted because of satellite image problems.

Previous estimates showed far fewer people hit by flooding because they were based on computer simulations, rather than observations. The new study finds that population within flooded areas grew 34% since 2000, nearly twice as fast as those outside flooded areas.

Tellman identified 25 nations that are “climate surprise” countries that will have to cope far more with the flooding problems than they do now. Those countries include the U.S, as well as Germany, Belgium and China, which were hit by flooding this summer.

Aside from dramatic floods and fires, heat waves are a major risk to prepare for in the future, Guha-Sapir said.

“It’s going to be a very big deal in the Western countries because the most susceptible to sudden peaks of heat are older people. And the demographic profile of the people in Europe is very old,” she said. “Heat waves are going to be a real issue in the next few years.”