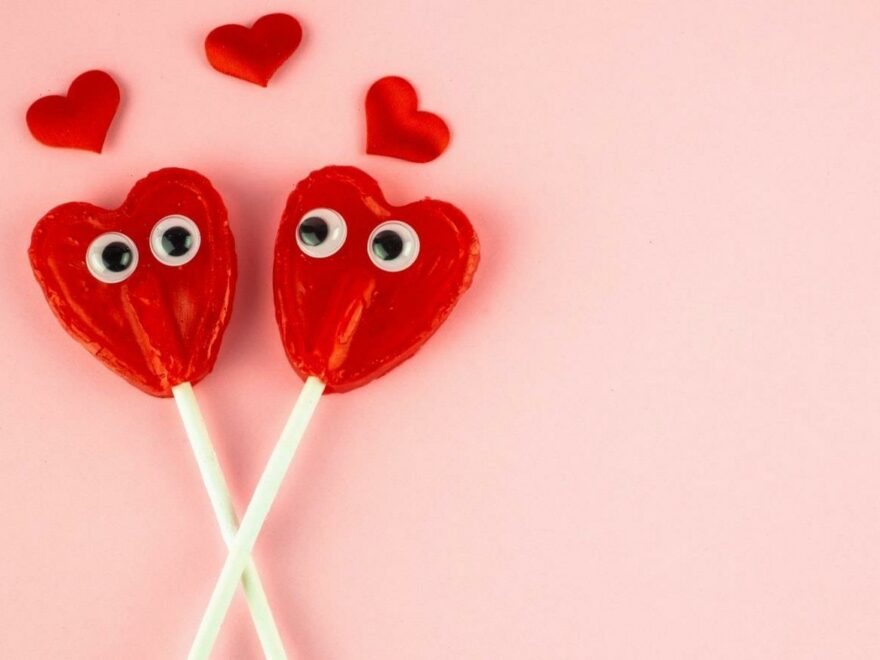 Kayleigh Dray is Stylist’s digital editor-at-large. Her specialist topics include comic books, films, TV and feminism. On a weekend, you can usually find her drinking copious amounts of tea and playing boardgames with her friends.

No one believes in love at first sight until that special someone comes and steals their heart – but what do psychologists make of the romantic phenomenon?

If we’ve learned anything from Disney, it’s that love is instantaneous; it hits you like an arrow loosed from Cupid’s bow the moment you lock eyes with that special someone across a crowded room (most likely a ballroom), and all those heady feelings will be cemented into a long-lasting relationship the moment you partake in true love’s kiss.

If you don’t believe the swooning romantic stories that come out of the House of Mouse, though, there are plenty of anecdotes floating around to seize upon.

“It was the 1950s,” says Amy dreamily, when I reach out to the masses for their favourite ‘love at first sight’ stories.

“My nan was about 19 and working as a pub singer on weekends and, one such weekend, she was working her shift in The Elgin – with her boyfriend watching nearby. My grandad walked in with his friends, saw her singing on stage for the first time, and was immediately like, ‘I’m going to marry that beautiful woman with the beautiful voice.’”

Is there any science to back up the romantic phenomenon of love at first sight?

Amy continues: “When nan’s set finished, he went over to talk to her at the same time her boyfriend did. And he said to her, ‘You don’t want to be with him, you want to be with me,’ – and it turns out she did. In fact, granny ditched her boyfriend that day, married my granddad in 1957, and they were together for 64 years until he passed away.”

Katy, meanwhile, tells me that she was in a bar with her friend over a decade ago, when her pal told her they’d be going on to a party later that night.

“I asked her whose party it was, and she literally turned me around to show me Jack; he was on his own, against a wall, wearing a lumberjack shirt, looking forlorn. And the feeling was so visceral – I knew he was going to break my heart.”

She continues: “We kissed that night and I was in love with him from the get-go. I just knew it; I knew from the second I saw him that this was absolutely going to be something, and that I was absolutely and utterly in way over my head.

“We dated for seven years, and I never lost that feeling. It was so much more than lust; it was more like this feeling of, ‘Oh shit, I’m going to be in love with you in about 30 seconds.’”

Noting that she’s always wanted to believe in love at first sight, Katy adds: “My dad knew he was going to marry my mum from the moment he first saw her at a disco. He told his friend as much. So yes, I absolutely believe in it.”

So, is there any scientific evidence to back up the phenomenon of love at first sight?

Of course, many couples say it all the time – that they “knew” the very first time they met. Indeed, Dr Audrey Tang, a chartered psychologist, mental health and wellness expert, explains to me that survey research by Zsok et al (2017) in the Netherlands asked 400 men and women about their experiences of romantic love finding.

“People reported feeling an ‘instant attraction’ to their partner which appeared to go beyond a biased positive memory,” says Dr Tang, although she adds that “a higher rating of attractiveness in the other person can be correlated with a higher rating of ‘love at first sight’”.

“It is also unclear how many of those couples are still together after that initial survey,” she reminds me.

Dr Tang tells me that anecdotal reports of the phenomenon include feeling:

“However, these are also potentially the portrayals in Hollywood romcoms and classic Disney movies,” she cautions, “and it is possible to question if we are experiencing a ‘self-fulfilling prophecy’ – aka we want it, we expect it, we ‘experience’ it.

“That is, of course, not to say these experiences are not real – they are likely to entail physiological changes to match. Then again, so does the placebo effect.”

While Dr Tang insists that she’s not a cynic, she does remind me that some of those feelings we associate with love at first sight may be – quite literally – romanticised as we create the narrative of our experience.

“It might be that what is happening is more ‘base’,” she adds, noting that Dr Fisher of Rutgers University, New Jersey, has identified three key components to attraction.

This is associated primarily with our hormones, which motivates us to seek a sexual union.

This is associated with high levels of dopamine and norepinephrine and low serotonin (very similar to the “adrenaline rush” we may experience on a thrill ride or if the body is stressed). In some cases, we may even be able to smell a suitable mating partner… or at least their smell can heighten our feelings towards them.

This is associated with oxytocin and vasopressin, which helps form bonds between caregiver and offspring in turn supporting their survival.

It is important to consider our motivations when we experience love at first sight, says Dr Tang.

“These three systems can work independently, and they can also support each other,” says Dr Tang, offering up the example of wanting to have sex with someone you don’t find attractive, or a sexual attraction turning into an affectionate attachment.

What questions do we need to ask ourselves when we experience love at first sight?

While love at first sight is a very romantic narrative, initial attraction and fleeting moments can fade in the longer term, explains Dr Tang, adding that the “longer term” brings with it further commitment, possibly compromise or even sacrifice, and it is therefore very important to keep in mind your own ideals, hopes, values and goals when it comes to succumbing to the love at first sight feeling.

“It’s also important to note that research suggests that it is very possible to have these feelings for more than one person at the same time (especially Libido and Attraction) and acting on the drive for an illicit affair can bring painful consequences for more than just the two people involved.

“It is important, then, to consider the possible outcomes of succumbing to our emotional and physical motivations.”

As such, these are the questions we might need to ask ourselves when considering any ‘love at first sight’ relationship:

1) What do I want from this relationship? And does the other person want the same?

“There is a difference between a hook up, a potential spouse, or a throuple,” notes Dr Tang.

2) Can I be clear about my expectations with the other person? And how will I respond if we do not agree?

“This also includes the things you are not willing to compromise on, such as wanting to have children, or perhaps your religious beliefs,” says Dr Tang.

3) Why do I want this relationship?

“Hopefully the answers here will relate to the feelings of joy you might bring to each other rather than, ‘I am in an unhappy relationship and need a reason to leave,’ which is unfair on the other person. Or, ‘I just need a relationship,’ as this may indicate there is some personal self-love work that needs to be done.”

Dr Tang adds: “Although a cliché, the most important relationship is the one you have with yourself and then it is much easier to form a healthy relationship with others. Your relationship shouldn’t ‘complete’ you – rather, the other person should be a bonus to your wonderful life.”

What are the odds of finding actual love at first sight?

Dr Tang tells me research from mathematician Dr John Billingham suggests that, for one in three odds of “true love”, statistically, we need to reject the first 37% of people, and then accept the next one who is a bit better than the rest.

“One in three is not great, but if one in two marriages in divorce, it may give us a better chance,” she laughs.

Can love at first sight ever lead to long-lasting love?

While that feeling of instant attraction can lead to lasting love, it also might not. And it’s important to recognise that romcoms and fairytales don’t always extend beyond the ‘happily ever after’ for that very reason.

“For some people who are instantly attracted, perhaps the attraction made them more likely to get together faster than those who were not,” says Dr Tang.

“However, this doesn’t necessarily mean that one relationship is going to be longer lasting than the other.”

What can we do, then, to build love at first sight into a long-term relationship?

Dr Tang advises that we do the following:

Further research into creating deeper connections following attraction proposes that there are a whopping 53 questions that we might want to ask a potential partner.

“While it is accepted that you may not want to go into your first date with a list, research on the interactions of people found that, while many people thought they would not enjoy being asked deeper questions, it turned out, they found them far more enjoyable and fulfilling than small talk,” promises Dr Tang.

“Another practical tool I would recommend is to think about the ways in which you like to give and receive love – and this includes within family and friends as well as romantic partners,” says Dr Tang.

“Long term relationships take work from both parties, and – if you have chosen wisely – all you’re really doing is continuing to make that choice.”

So, what does this mean? Well, it seems we like to give and receive love in five different ways:

“While people have a mix of preferences, these preferences do affect their perceptions,” says Dr Tang. “For example, a person who expresses their love through acts of service (eg. my husband fixes my car) may be thanked by their partner, but if s/he prefers love to be shown through gifts – s/he may still feel unloved while the partner is now feeling under appreciated.

“The parents whose preference is for quality time may be turning up at university, when for the child, a text saying “Hey – I miss you” (words of affirmation) – may have been preferred.

“It is the lack of awareness of preference, as well as a lack of communication between those in a relationship that can lead to misunderstandings. So, again, it’s a case of being aware of yourself, and communicating this with your partner.”

Dr Tang notes that mathematical modelling has found that partners who allow each other to gripe and complain are, in fact, happier than those who try to avoid conflict.

“While it would not be a pleasant environment if partners were just moaning with no real attempts to fix things, allowing people space to experience and express emotions, and then being able to work together to move forward is a healthy form of teamwork… and relationships can be seen as a team,” she says.

“Long term relationships take work from both parties, and – if you have chosen wisely – all you’re really doing is continuing to make that choice.”

Dr Audrey Tang is a chartered psychologist, mental health & wellness expert and author of The Leader’s Guide to Resilience, Pearson, £14.99.