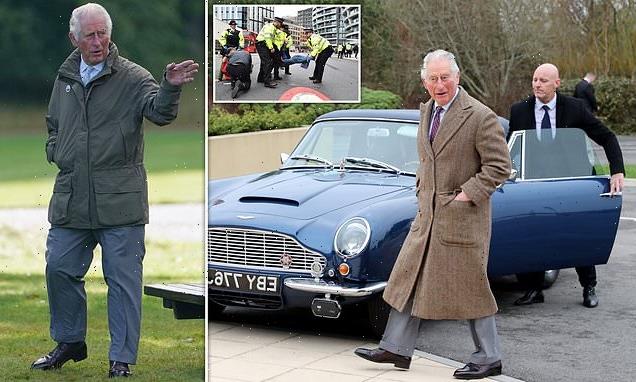 STEPHEN GLOVER: The road to hell is paved with Prince Charles’ good intentions over climate change because the heir to the throne is worryingly out of touch with the lives of ordinary people

Prince Charles manages to be an admirable and an infuriating man at the same time.

Both these aspects were on display during a fascinating interview which the BBC put online yesterday.

He’s admirable because, although like most princes he likes his creature comforts, he cares deeply about the future of this country and the planet.

In particular, he has spoken out about climate change over many years. 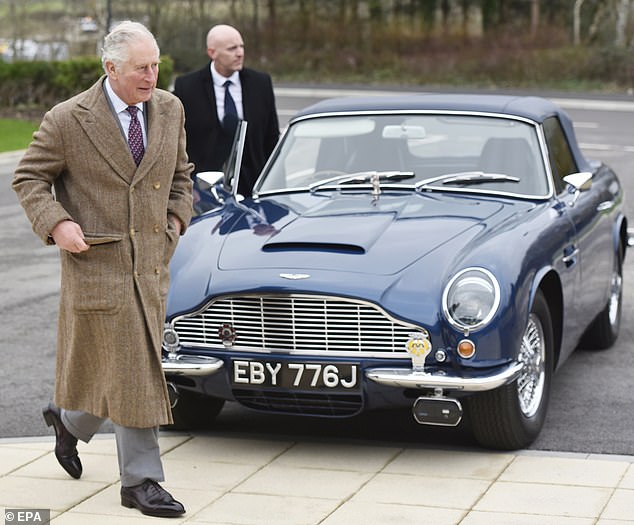 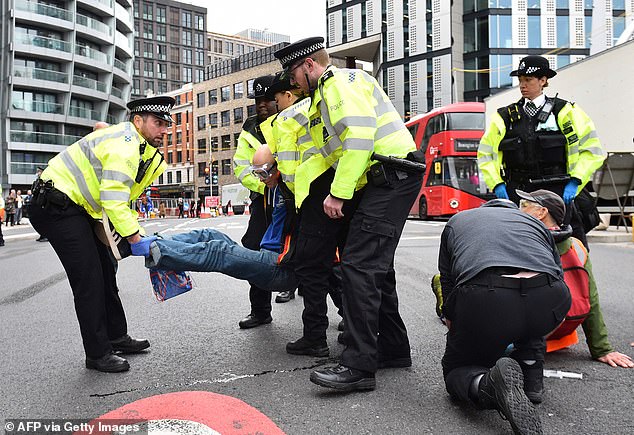 His concern about man-made damage to nature began several decades ago, as he recalled in the interview, with the grubbing of countless hedgerows, the draining of wetlands, and the destruction of woodland.

I suspect most people will be grateful for his involvement. As the years have passed, Prince Charles has become increasingly alarmed by climate change, sometimes to the point of being apocalyptic.

It’s fair to say that mainstream opinion, and certainly the political classes, have more or less caught up with him.

But while we should on the whole be grateful that the heir to the throne cares so much, and is generally so knowledgeable about the issues he embraces, it can hardly be denied that he sometimes sounds like an interesting though dotty professor who is worryingly out of touch with the lives of ordinary people. 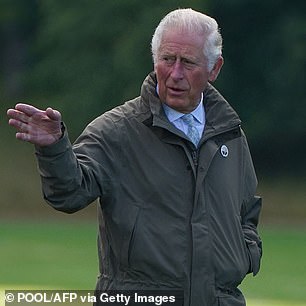 When the prince was asked by Justin Rowlatt, the BBC’s climate editor, what he thought about the eco-zealots who have bunged up the M25 in recent weeks, and brought parts of London to a standstill, he replied that he ‘totally understood the frustration’.

That was at least candid of him.

But many people who have been stuck in endless queues on motorways, and made late for work or hospital appointments, will have been taken back by his somewhat forgiving remark that it isn’t ‘helpful to do [protests] in a way that alienates people’.

He could and should, have pointed out that blocking roads, and preventing hard-pressed folk from going about their business, is not only utterly pointless and extremely anti-social. It is also now illegal.

I suppose Charles has very little experience of being stuck in traffic jams, whether caused by eco-warriors or anything else.

Some years ago, I twice saw him being driven in his Bentley (powered by some sort of biofuel) as it cut a swathe through traffic, accompanied by police outriders and a cavalcade of gas-guzzling security vehicles. 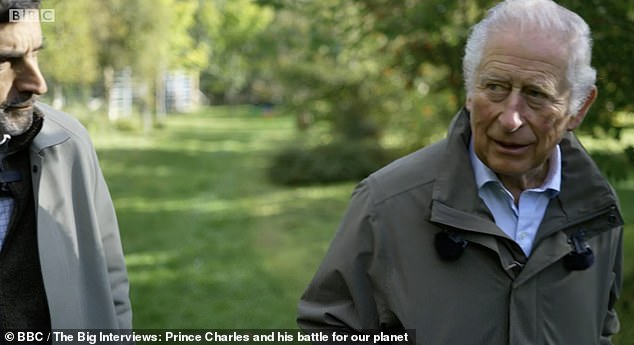 Such are the privileges of princes, and I do not complain. But perhaps Charles needs to make an extra effort to understand how normal drivers may feel when they are impeded by selfish idiots.

There is an unworldly quality to him, which was often evident during the interview.

When asked about his own carbon footprint, the prince proudly revealed that his vintage Aston Martin runs on surplus white wine and whey from cheese-making.

I hope he was not suggesting that we can all follow his example!

Prince Charles talks about the environment

On climate activists like XR, Insulate Britain and Greta Thunberg: ‘All these young people feel nothing is ever happening so of course they’re going to get frustrated. I totally understand because nobody would listen and they see their future being totally destroyed.

‘The point is, people should really notice how despairing so many young are.

On protests: ‘I understand why they go out but it isn’t helpful to do it in a way that alienates people.

‘I totally understand the frustration. The difficulty is how do you direct that frustration in a way that is more constructive than destructive.’

On his cheese and wine powered Aston Martin: ‘That runs now on waste products. It runs on, can you believe this, surplus English white wine and whey from the cheese process.’

On his diet: ‘I haven’t eaten meat and fish on two days a week and I don’t eat dairy products on one day a week. If more did that, you would reduce a lot of the pressure.’

On world leaders: ‘It’s just talk. The problem is trying to get action on the ground which I’ve been trying to do for the last 40 years.’

On nature:  ‘We are damaging nature by not understanding how much we depend on everything that nature provides. And also, not understanding, or having been somehow trained to believe, that nature is a separate thing from us we can exploit. What we’re doing with our own economy is to disrupt nature’s economy.’

‘Having been ridiculed for so long, they suddenly all want me to help convene them. Because I haven’t got an axe to grind I’m only keen to get the damn thing sorted.’

Another supposed sacrifice he makes is not to eat dairy foods on Mondays, and to avoid fish and meat two days a week.

It all sounds a bit head-in-the-clouds, and these are anyway very minor concessions.

Moreover, some poor people could not dream of eating meat or fish for five whole days in a week.

Making allowances to save the planet is hard for all of us, and Charles is no exception.

Although not pressed on this in the interview, he continues to make lavish use of fuel-greedy and carbon producing airplanes and helicopters in the course of his duties.

In the preceding 11 days, he had taken three flights on private jets on official government business and one on a helicopter, notching up many thousands of air miles. Perhaps he had no option.

Probably it is unrealistic to suggest that like Greta, the busy prince could eschew all air travel.

But if it is very hard for him to make meaningful sacrifices, so it is for lesser mortals.

Yet in common with other campaigners, he tends in his exhortations to put idealism before practical considerations, and occasionally to sound absolutist.

According to him, young people ‘see their future being totally destroyed’. If that is true – and I doubt it – surely it is the role of a wise prince to try to put such extreme anxieties into some sort of balanced perspective, rather than to risk whipping them up by declaring that ‘it is already beginning to be catastrophic’.

Some young people, I am sure, as well as older ones, will be attracted by what Charles says.

Just as others, including drivers who can imagine themselves blocked on the M25, and those of us unable to pour white wine into our petrol tanks, will be much less convinced.

And that really is the problem. No one could dispute that over many years the good-hearted prince has done the country some service by drawing attention to our depredations of nature.

But perhaps not very many years from becoming king – though we all pray that it will be a long time – he is again in danger of dividing his future subjects.

One day soon he will have to stop evangelising. He could comfort himself with the thought that he has achieved a great deal.

And yet, to judge by the interview, he remains restlessly unsatisfied, saying ‘it’s taken far too long’ and ‘they just talk’.

Why not more serenely recognise the progress that has been made – and to which he has contributed?

Throughout the interview he sounded unduly rueful, on one occasion referring to creating his garden in Scotland as ‘an old man’s obsession’.

He gave us a glimpse that he feels unfairly treated by critics in the media, and was altogether too pessimistic about what has been achieved by politicians in respect of climate change.

Prince Charles can accept a good portion of the credit for the advances that have been made. He is more respected than he seems to think.

But it is now time to stop ruffling the feathers of millions of Britons, and to bend his energies to becoming the kind of gloriously impartial monarch his mother is. 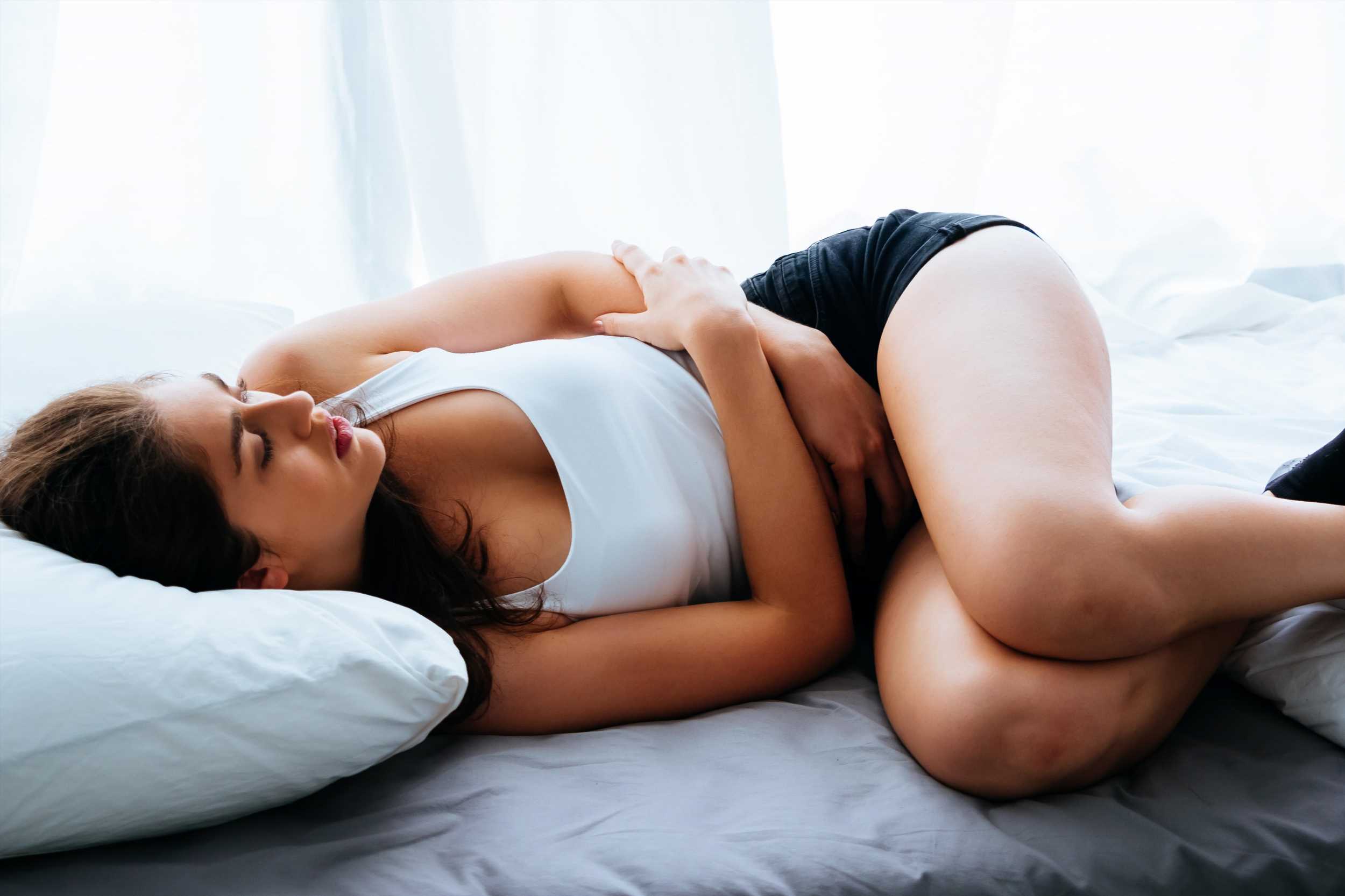