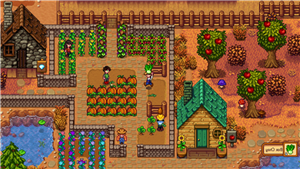 Years after its release, Stardew Valley remains one of the most popular life simulation video games on the market. In response to the game’s success, creator Eric Barone, a.k.a ConcernedApe, released several updates with new content. However, development on Barone’s new title, Haunted Chocolatier, has somewhat pushed Stardew Valley to the backburner. Will Stardew Valley receive any more significant updates, or has it reached the end of the road?

Barone released Stardew Valley on PC in 2016, and it quickly became a best-seller. According to Polygon, it surpassed the 1 million sales mark just two months after its debut. Barone rolled out eighth-generation console versions of the game over the next few months, bringing it to a broader audience.

Stardew Valley reached a new level of popularity in 2020. As the coronavirus (COVID-19) pandemic began, many people picked up the game as a way to pass the time and relax during the stressful year. Additionally, several Animal Crossing: New Horizons players sought out similar games, including Stardew Valley.

However, Barone eventually slowed down the content releases. The latest one arrived on February 2021. Since then, the game has received mostly minor bug fixes.

Many fans have wondered if the lack of content updates in the last year meant Stardew Valley reached its final stage. Thankfully, that’s not necessarily the case.

In a recent interview with VGKami, Barone said he’s not ruling out another content drop. However, he also feels Stardew Valley “is in a very good place as it is.”

“I have no plans either way. I don’t want to make any promises for more updates, and I also don’t want to say definitively that it’s finished,” he revealed.

Even at a good place, though, Barone added that “there’s always room for improvement.”

For now, Barone is putting his energy into Haunted Chocolatier. Back in October, he shared a first look at the new game, revealing that it would be similar to Stardew Valley yet still unique. As the name suggests, the game follows a chocolatier who opens up shop in a haunted castle.

At the moment, Haunted Chocolatier doesn’t have a release date. However, Barone provided a progress update in his interview with VGKami.

“The game’s coming along well. I’m making everything from scratch because that’s how I made Stardew, and it worked out well. It’s what I know how to do. Also, I wanted the game to feel distinct and have its own character,” he said. “I’m also coming at it with 10 years of experience that I didn’t have when I started on Stardew Valley. Still, I am learning new things.”