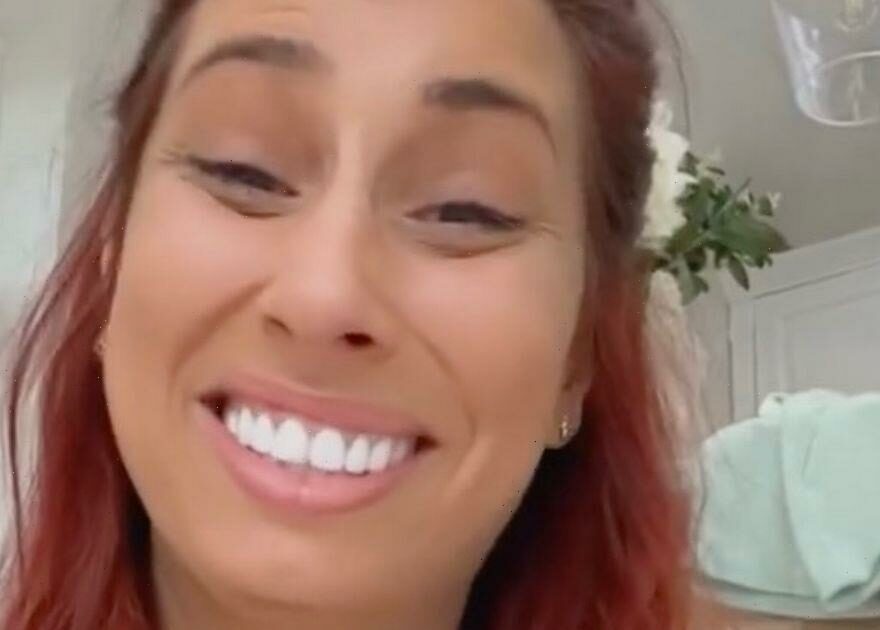 Stacey Solomon has excitedly revealed that she has teamed up with Primark once again to create a new kids range.

The Loose Women star, 32, could barely contain her excitement as she revealed she had enlisted the help of her three sons Zachary, 13, Leighton, nine, and three year old Rex to help her design the clothing.

As she greeted her Instagram followers on Wednesday morning, Stacey shared a photo of her tea cup, with a yellow two-piece kids outfit on a hanger.

She wrote on top: "Good morning everyone…

"Today I am finally allowed to share something really special with you that I've been working on since last summer".

The proud star went on: "It's so special to me and the boys and I'm so proud of it…" followed by a brown heart emoji.

Stacey then turned the camera to herself to share her exciting new project.

The TV star said": "Primark asked me to make another spring/summer collection for kids! I get so excited because I genuinely never thought a shop that I shopped in my whole life, that's always been there for me would ever ask me to create my own range in there let alone get to do it again. I'm so proud of it."

Mum-of-four Stacey then explained how her three sons Leighton, Zachary and Rex all had an input in the designs.

"The boys were a massive part of it," she said. "They chose the colours, some of the designs and it's just really special and I love it and I'm gonna show you, hold on…"

In the next post, Stacey placed three pairs of tiny kids' shoes on a round table.

Stacey excitedly said: "I'm gonna start with the shoes because they're so cute!"

The fist pair on show was some high top white trainers, with embroiding of a rainbow and a sun on the side, which Stacey said her sons "live in".

Another set was some white sliders with rainbow stripes of pink, blue, green and yellow across the strap. Stacey explained her kids insisted to her: "'You've got to put sliders in mum!'"

The final pair were some bright, sunny yellow strappy jelly sandals, which Stacey said was inspired by her childhood as she explained: "My and my sister used to wear these growing up and we were obsessed with them. So I just had to, how cute are they?"

Next up, Stacey showcased a hoodie, onsie and made from towelling material in a bright orange colour.

"This was inspired by Zachy," Stacey said. "Whenever we go swimming or, you know, you're on the beach and they get wet and they wanna put a towel on and it just keeps falling down and they moan. So we made these really long throw-over tops and they're made out of a towelling material but it's a really soft, light towelling so it will dry them down but won't make them super hot or feel heavy."

She added: "I'm just obsessed with these, the kids will live in these!"

Mum-of-four Stacey then turned the camera to a teal and white towelling material shorts and T-shirt set with a yellow set behind.

"The boys love the material so much that we made some shorts and tops sets in different colours – in green and in yellow, just out of the material because they were obsessed with it," Stacey explained.

Giving a final glimpse at the range, Stacey showed off an adorable Hawaiian patterned shirt with pastel pinks, oranges and greens on.

Stacey explained the shirt was inspired by her son Leighton's love for The Goonies, in which Chunk sports a Hawaaiian shirt.

Speaking from behind the camera, Stacey said: "The last thing I'll show you for today because I don't wanna bore you is this. This is really special because, basically, this was Leighton's idea.

"He watches this show called The Goonies and he's obsessed with it and there's a little boy who wears a Hawaiian shirt so, he wanted to make his own Hawaiian shirt and this is what he came up with, which I just think is so special and so cute!"

Moving the camera to the right, Stacey showed a jumpsuit with an elasticated top and straps with the same print on as well as a dress.

"We decided we liked it so much that we made a little matching romper and a dress so they can all match," She gushed.