Members of Sydney’s Sikh community have defended their children’s right to bring ceremonial daggers to school, saying a ban would compromise their ability to observe their faith.

They said bullying was behind an incident in which a 14-year-old was accused of stabbing a 16-year-old with a Kirpan – which symbolises a Sikh’s duty to defend themselves or aid those in peril – at Glenwood High almost two weeks ago, and that’s the issue the government should be focused on. 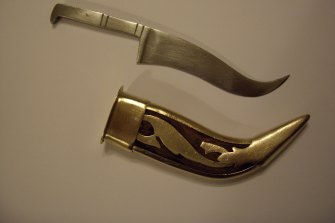 A Kirpan, or ceremonial dagger, is one of five things a baptised Sikh is required to carry on their body.Credit:Harisingh

“Clearly when an incident comes to light that causes community concerns there are questions about that, concerns that I share,” she said. “We need to have a look at whether that’s still appropriate in a school setting … to see if any changes to legislation [are] needed.”

The May 6 incident resulted in a 14-year-old boy being charged with intent to cause grievous bodily harm. He will face court in July and is on bail. The school has been talking to Sikh representatives to work out how students can observe their faith while ensuring the safety of the school community.

School systems across the world have struggled with Kirpans. In Britain, most schools ask students to bring small, symbolic daggers – about 4 centimetres long – that are fully enclosed and sheathed in a way they can’t be drawn.

In Canada, the supreme court overturned a court of appeals ruling that it was reasonable to ban them in schools. The judges decided a ban sent students the message that “some religious practices do not merit the same protection as others”.

The Kirpan is one of five implements baptised Sikhs are required to carry. The others are Kesh (uncut hair, respecting God’s creation); Kangha (wooden comb, for hygiene); Kara (iron bracelet, for good work); and Kachera (cotton underpants for good character).

Australian Sikh Association chairperson Ravinderjit Singh said he had been involved in the discussions with the principal, but was not told about plans to review the exemption until he heard it on the news on Monday. “I think it is a knee-jerk response,” he said. “We do not wear the Kirpan as a weapon.

“It is a big responsibility given to kids when they partake in a baptism. We talk to them about the importance of items and how the Kirpan should be worn and used. It is not projected as a weapon – that is not what it is meant to be used for.”

He said students could use many other objects as weapons. “A compass in a school bag, a fork or a knife… Banning this would not help anything other than cause more issues in the community. It is a very unfortunate incident and we feel for the boy who has injured.”

Mr Singh said it was also vital to address why the incident had occurred in the first place, and said Sikh parents were considering changing schools, fearing their children might be targeted.

Amar Singh, the president of Turbans4Australia, said the incident at Glenwood High involved a student retaliating against bullying. “The problem here is not the Kirpan,” he said. “If he had picked up a brick, or a pencil, do we ban bricks and pencils? You could smuggle anything into your school, if you wanted to.

“The Kirpan is a very important part of who we were, what we wear as a Sikh every day. As a baptised Sikh, you wear it, the same as your turban, it serves a purpose. My friends in the area are very worried about this dividing the community.”

In 2017, the Queensland anti-discrimination commissioner said a proposal to ban the Kirpan in state schools was discriminatory, as it meant Sikhs had to compromise their faith to work or study.

Mark Fowler, Adjunct Associate Professor of law at the University of Notre Dame, said a discrimination complaint could be defended under a “reasonableness” defence as it was imposed on all students for safety reasons.

Catch all the day’s breaking news

At the end of each day, we’ll send you the most important breaking news headlines, evening entertainment ideas and a long read to enjoy.  Sign up here.

Most Viewed in National