On Monday, Scott Morrison told voters his government would exercise “fiscal discipline” to ensure future generations were not left in a sea of debt.

Declaring the government was not running “a blank cheque budget”, the Prime Minister made it clear the government remains committed to its plan to stabilise and reduce debt while taking advantage of low interest rates to reduce debt-servicing costs. 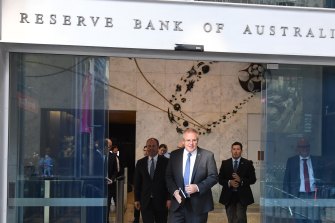 There is now a tension between the policy objective of the Morrison government and the policy commitments of the RBA.Credit:Peter Rae

Twenty-four hours later, Reserve Bank governor Philip Lowe revealed plans to create another $100 billion out of thin air while predicting the economy is unlikely to be strong enough to deal with even a small increase in official interest rates until at least 2024.

The extra $100 billion, to buy bonds sold by federal and state governments until at least September, is on top of the RBA’s existing $100 billion bond buying program ($52 billion of which it has spent in recent months), almost $200 billion in cheap money it is offering commercial banks and the record low cash rate of 0.1 per cent.

It is an an incredible amount of support for the economy from the RBA. By year’s end, it will be close to 30 per cent of GDP.

One of the RBA’s key jobs is to get inflation between 2 and 3 per cent. To get there requires, in Dr Lowe’s words, wages growth to be “materially higher than it is currently”.

“This will require significant gains in employment and a return to a tight labour market. The [RBA] board does not expect these conditions to be met until 2024 at the earliest,” the governor noted.

There is now a tension between the policy objective of the Morrison government and the policy commitments of the RBA.

It is so concerned about the state of the nation’s books it won’t even concede the JobSeeker payment needs to be increased once the COVID supplement ends in mid-March, partly out of fear of the budgetary cost of higher unemployment benefits.

Unsettled by spending so much money dealing with the biggest economic dislocation since the 1930s, the Morrison government wants to rush back to its pre-virus narrative of repairing the budget bottom line.

But the bank’s pre-virus memories are different.

That was when the RBA had to cut interest rates to a (then) record low as it sought to deal with a jobs market so slack that wages growth was a distant memory for most and consumers refused to get out of their spending funk.

The business community was reducing its level of investment before the virus, with the RBA openly encouraging all governments to spend more on infrastructure to get the economy growing more quickly.

The RBA has punted another $100 billion that it is going to take a lot more than some political rhetoric to get the economy and the jobs market back to anything approaching normal.