Facebook has banned the sharing or viewing of our news articles on its platform. For independent journalism straight from the source, download our app and sign up to our newsletters.

Part of the dramatic potency of Puccini’s Tosca arises from the way he juxtaposes seething incongruous passions with the solemnity and pomp of grand architectural monuments – the evil lechery of Scarpia against a soaring Te Deum from the choir in the Roman church of Sant’Andrea della Valle, the pleasant gavottes preceding torture in the Farnese Palace, and of course Tosca’s famous death on the ramparts of the Castel Sant’Angelo (or, in the original, at the foot of them after a hasty exit). 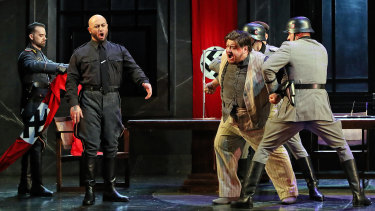 Marco Vratogna as Scarpia and Diego Torre as Cavaradossi in the climactic torture scene.Credit:Prudence Upton

These spaces have their own dark history and John Bell’s production twists this antinomy a notch tighter by setting the action in German-ruled Italy of 1943. This creates its most chilling moment in the Te Deum scene that is the climax of Act 1, as the lushness of Michael Scott-Mitchell’s design and modulated tones of Teresa Negroponte’s costumes are slashed across with the bright reds and gleaming silver of Nazi regalia, and barbarism flaunts its cruelty before a corrupt church and a cowed people.

This revival by Matthew Barclay is tightly staged and finely sung and does full justice to the tensile dramatic strength of Puccini’s original. In the first act, Carmen Giannattasio brought to the title role a sound of rewardingly coloured brightness, conveying strength, passion and a lively animation of the spirit.

In Tosca’s most famous aria, vissi d’arte, her approach was warm and carefully calibrated, turning the whole into a great arc that she traversed with finesse and power. This was a triumphant performance with thrilling peaks and never less than totally absorbing.

As her tormenting antagonist Scarpia, Marco Vratogna had a voice that was overbearing, harsh-edged and brutal, yet there was richness and complexity in its fierceness. Dramatically, his domineering cruelty was such that when, in the last act, Cavaradossi marvels that the gentle hands of Tosca could wreak such vengeance, it reinforced the sense one had witnessed an epic clash.

As Tosca’s lover Cavaradossi, Diego Torre sang with focused intensity in the first two acts, mellowing in the third act to bring warmth and grace of line to the premonitory rise and fall of E lucevan le stelle. David Parkin combined expressivity and clarity as Angelotti and as the sacristan, Luke Gabbedy was as polished in sound as he was shambolic of character.

Unforgettably, Bell gives the shepherd’s aria of the third act to a young Jewish captive and Aidan Carey sang the haunting Lydian tune with plaintive simplicity. The Opera Australia chorus contributed powerfully to the devastating close of the first act while the Opera Australia Orchestra’s strongest moments were from the woodwind and brass.